Darkened by the smoke of Satan.

If there is ever going to be a cleansing of the Church, her much longed-for restoration, there is one simple fact that needs to be understood.

In her human agency, the institution, the man part of the Church, it operates as an international organized crime syndicate that has access to enormous amounts of money from multiple sources, flies under the cover of being "religious" and under that cover has been unexamined and unchecked for the past half-century.

Since the news about McCarrick broke back in June, life has completely been turned upside down here at Church Militant. We are now constantly on the phones and in private meetings exchanging notes and intel with state and federal prosecutors and investigators and clergy and insiders poring in loads of info.

To a man, they all are coming to the realization that this evil monster that has seized operational control of the Church is far-flung and motivated by sexual and financial corruption on a scale that staggers even these veterans.

It's so big, so grandiose, so enormous, that they can't even get their brains around it, let alone figure out which legal avenues to pursue — cut in short, the deeper they dig, the deeper the hole becomes.

The Dark Side has taken over the day-to-day function of the Church, and it's been this way for a very long time now.

Sometimes it becomes manifest in the homoclergy scandal and the resulting bankruptcies and billions in payout and hush money — not to mention the cover-up and deceit, the uppermost weapon of the Father of Lies, who too many clergy serve.

All of that, of course, has raised this to a whole new level of exposure and brought in the federal and state investigations, some of which we here at Church Militant are being brought in on.

There is also massive beyond imagining financial corruption, hiding of assets, collecting of billions of dollars in archdiocesan fund-raising campaigns across the nation. And those are just a couple of the evils on a natural level.

On a supernatural level, it's far worse. Saint Paul said when one part of the body is hurting, all the other members hurt as well.

In the Universal Church — the Catholic Church — present in every nation, Satan has brought about such a moral rot, a loss of supernatural faith among huge numbers of leaders, that the entire worldwide Church is suffering immensely

The loss of faith, the homosexual predation of not just minors, but also adult males, the lies, the deceit, the cover-up, the lack of transparency, the authoritarian approach, the unaccountability and most sickening of all, what the faithful cry to Heaven for justice for — all of it wrapped up in a cloak of religiosity and spirituality.

The Faith has been devastated around the world with phony catechesis, false ecumenism, a near destruction of the liturgy and sacramental as well as devotional life — an entire gutting of what it even means to be Catholic.

We don't know if this is the Great Apostasy that Heaven warned about through the saints and Scripture, but if this isn't it, we'd sure hate to contemplate what it would look like.

It's high time that faithful Catholics wake up to this — the laity — and begin to affect change.

Leaders must be confronted. Their bad and sometimes evil actions and decisions must be challenged openly, in public. They must be directly reminded that their first and only duty is the care and salvation of souls.

They must become transparent and they must be held to account for bad priest appointments — looking the other way with the homoclergy in their diocese who are corrupting souls, and sometimes even bodies, of innocent victims.

You priests out there, why were you ordained in the first place? Stand up and fight. What happens to you will happen to you, but you will gain Heaven.

You seminarians, realize that if and when you get ordained, your first duty will be to push back against all of this in no uncertain terms, and likewise, whatever happens, happens. You will secure your salvation. We laity must support them in this — with our prayers obviously, but also how we direct our money.

Satan has built up an empire within the Church, and it is showing itself now as far more formidable and corrupting than anyone at first could have imagined — now it's all coming clear. 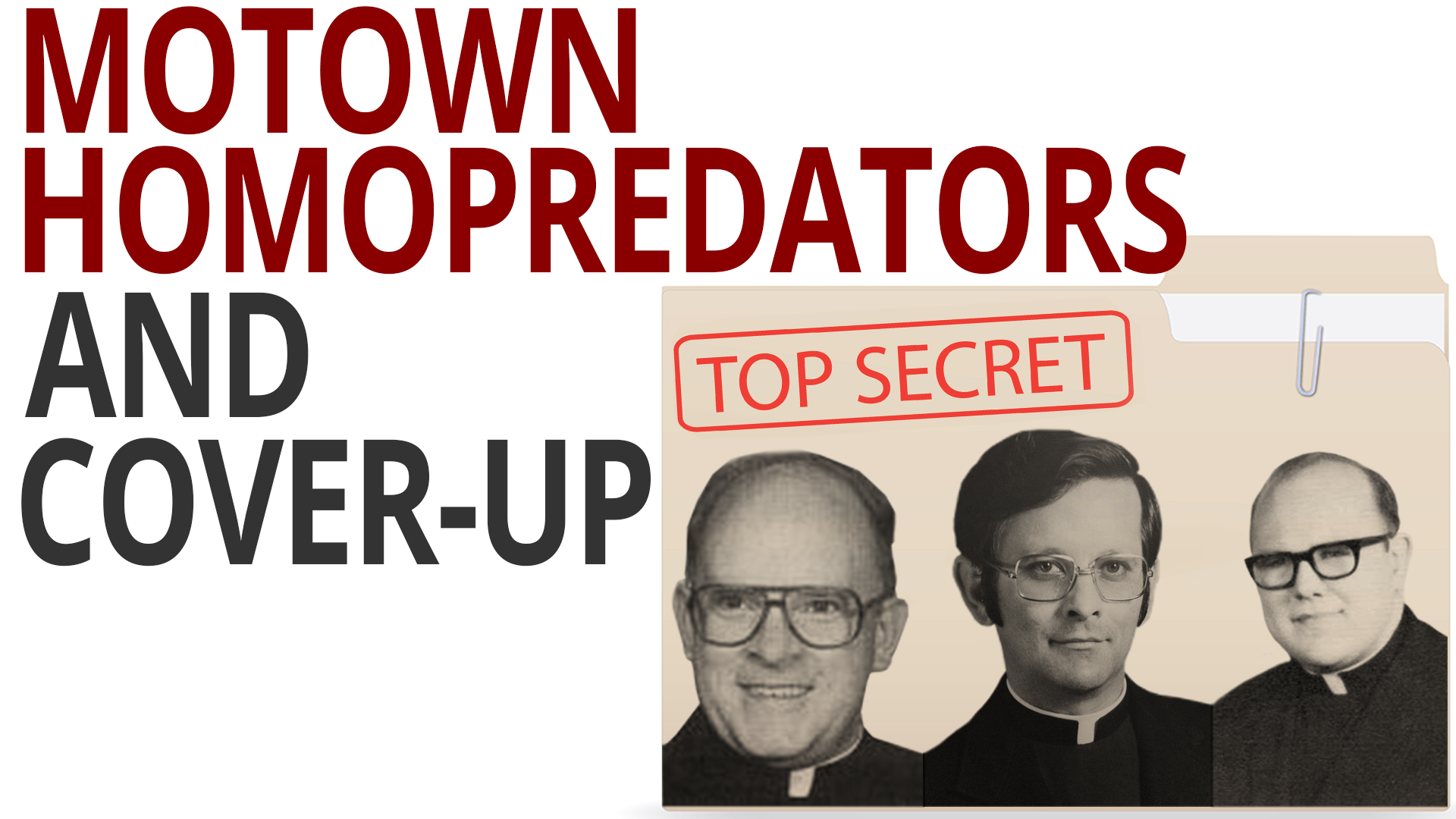 Motown Homopredators and Cover-Up
It's all got to change.