The Day of Reckoning Has Arrived

It's been brewing for a while now, and yesterday, the sins of the homosexualist hierarchy officially caught up to them.

In New York state, the Child Victim's Act went into effect, and the vultures have now swept in to begin picking over the dying body of the Church as hundreds of lawsuits worth hundreds of millions of dollars — perhaps even billions — were filed throughout the state's seven dioceses.

Church Militant, you will recall, led all Catholic media last year during the "Summer of Shame" saying this was bound to happen — and now it has.

States all over the country are now suspending their statutes of limitations and opening up a one-year window for any victims of past sexual abuse to sue the Church, and on the very first day, literally hundreds of lawsuits were filed; and yesterday was just day one of the year — 364 more to go.

In courthouses all over the state, lawyers lined up in the halls beginning at midnight to get their clients' lawsuits filed. In many places, the atmosphere was almost circus-like.

And why wouldn't it be? From the attorneys' perspectives, a massive, huge payday is waiting down the road and potential bankruptcy for multiple dioceses, as Buffalo's lying bishop, Richard Malone, even stated publicly days before.

The bishops in New York fought like hell to prevent this law from being passed, with Cdl. Timothy Dolan leading the way.

In fact, the flashpoint of the story yesterday happened right on the steps of his cathedral, St. Patrick's on 5th Avenue, which was fitting since it was here where it was all concentrated last year as news broke that former Cdl. Theodore McCarrick had been accused of sexually abusing a minor right inside this very cathedral.

That case then caused James Grein to come public, and at the Silence Stops Now rally last November in Baltimore, which Church Militant was proud to be a sponsor of, Grein step forward into the glare of cameras and announced that he had been an 18-year sexual abuse victim of the corrupt cleric.

In a moment of poetic justice, Grein stood with his lawyer right in front of the cathedral and together they began a process which may very well bring the archdiocese of New York to its knees.

It was a moment of vindication for Grein and hundreds if not thousands of victims of abuse — mostly male — at the hands of corrupt clergy.

And Grein's point about this now presents a moment to get to the bottom of how all this came to be is what has corrupt homosexual members of the hierarchy most concerned — and if not, it should.

So many of the bishops and members of the establishment, for decades, have covered up this filth for so long and used the mechanism and machinery of the Church to hide behind and even destroy victims — that open court is now the only way to force the truth into the light of day.

This is the moment that the weak, head-in-the-sand Catholics can no longer deny, as the secular press has grabbed hold of this story and is now running with it, much like they did with the original story back in 2002 in Boston.

This has come about because of the infiltration of homosexual men into the Catholic priesthood, some of whom, certainly not all, but some of whom raped altar boys, thousands and thousands of altar boys.

Their homosexual buddies who had moved up the ranks to become bishops covered up and lied for them, bullied and intimidated victims and sat by with false platitudes as many young men killed themselves, unable to bear the psychological torture.

Lying prelates like Blase Cupich and Joseph Tobin continue to deny that homosexuality had anything to do with it, with Cupich even manipulating last February's sex summit in Rome to deliberately avoid the discussion.

When all this became much more public last summer, many Catholics somewhat naively hoped that this would finally be the moment where the Church could be cleaned up, the hierarchy held to account for their sins and gross negligence.

But in the intervening year, what has become blindingly clear is that the gay corrupt mafia, as archbishop Viganò calls them, has dug its heels in even further and doubled down on the lies and cover-up, some bishops shredding documents at a furious pace.

The rampant homosexuality in the Church among clergy is now completely exposed, and still, the hierarchy does nothing about it.

Look at these pictures from an exclusive Church Militant report from just yesterday, two former priests from New England who recently left their vocations and moved to Minnesota where they were civilly married. These are their own social media postings.

Their respective dioceses simply avoid the entire affair saying once they left, there's nothing they could do.

How about conducting some deep-dive forensic analysis of how this could happen — what was their formation, what's the current formation? But no, that won't happen because the men in charge support all this.

Homosexualist clerical kingpin himself James Martin is protected and promoted all over the country by dozens of these wicked men in miters, the same men who lied and covered up all this sin, and a couple hundred others of the mitered class say nothing, implicating themselves in the sin.

Here in Detroit, a disgraced archbishop who had to step down in St. Paul-Minneapolis is allowed to return to his home archdiocese and concelebrate Mass at the seminary as though nothing happened — the same seminary, as rector, former seminarians report he used to hit on them.

These are but a tiny, tiny sampling of what has become the status quo in the clerical ranks, something Abp. Viganò last year himself said, and has been proven true point by point.

And yet, the greedy homosexualist prelates still do not learn, as Dolan and his archdiocese have actually sued their 32 insurance companies who refuse to pay any settlements these hundreds of lawsuits are going to produce.

Their position: You liars and cover-up artists are the ones who let this go on for decades, and you even lied to us about what you did. We are not paying for your sins.

That's a tough case to argue against.

Dolan and other bishops around the country are now in a position to have to begin doling out millions in legal fees to force their insurance companies to pay what will likely be hundreds and hundreds of millions in settlements.

After their final years are spent in all these civil courts, they very well will find themselves moving down the hall to the bankruptcy courts.

And yet, in the midst of this scandalous turn of affairs, not one, not a single sitting ordinary has stepped forward and owned this filth, saying we are guilty of now laying bare the entire patrimony of the Church, in addition to participation in what may very well be the largest sexual abuse cover-up in the world — not one.

And yet, they will put on the happy face of willing participants and wanting to see justice done and victims protected — blah blah blah.

Don't believe them — not for a single minute.

They are products of decades-old system, a system which rewarded and advanced lying, thieving homosexual men.

They played the game their entire careers; they danced to this music as they climbed their way up the ladders, but now, the music has come to a screeching halt.

What a horrible legacy these men will have left when their corpses are rotting their graves in a few short years: tens of millions of souls having abandoned the one true faith; 7 out of every 10 rejecting the central teaching of the Real Presence; thousands and thousands of altar boys raped and abused; thousands of vocations destroyed; liturgy made into a side-show.

And now, the very patrimony of the Church, what millions of poor immigrant Catholics scraped and saved for decades to hand over for the work of the Church, all to be gobbled in court judgments and scattered to the four winds.

What about the millions of immigrants who came here and used their sweat and toil and money to build up the Church in Her work of holiness?

Since they will not bow to the will of God and correct their ways, God is now forcing the situation, as He has always done when the leaders go astray.

In a couple of months, the state of New Jersey Child Victim's Act goes into effect. The rampage through the Church is about to shift into high gear.

Pray for the restoration; pray that these wicked, lying prelates repent, that they have their eyes opened or that God will close them forever. 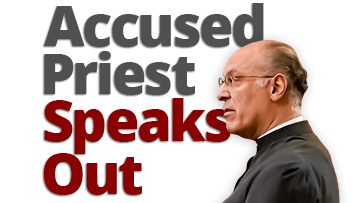