The Demon of the USCCB

The conference is controlled.

There is something seriously wrong and deeply troubling about the United States Conference of Catholic Bishops — and we don't mean just the usual stuff.

When the bishops get together as a conference, it's like some kind of demonic force, a demon, is at work, guiding everything going on there. The confusion, the absence of clarity, the muddled messages that pour forth like vomit — something is way off.

During this past week, loads of Church Militant staff had multiple chance-meetings with numerous bishops, and, well, it was creepy. And it's not just the bishops, but loads of the "professional Catholic" crowd (as Pope Benedict referred to them). They, too, are under some kind of spell, all of them avoiding the reality of the Church's crisis and creating a substitute moral imperative to cover for their willful blindness.

Since our various encounters with bishops were private (in a sense), we will skip over who the bishops were we talked with — and there were quite a few — and simply get to the what of what was conveyed.

After the vote (222–8) to pass the much-applauded, toothless Eucharist document, we met multiple bishops that afternoon and especially the next day as they were all leaving to return to their dioceses. So we asked quite a few the direct question, "As a bishop, would you give Holy Communion to Joe Biden if he came to you?"

All you got was empty eyes staring back at you.

The answer: stone-faced silence. Peering over the tops of their masks, all you got was empty eyes staring back at you, with a little anger mixed in. It's the same eyes I saw when I confronted Notre Dame president Fr. John Jenkins a few years back about the destruction of the Faith at the school.

It isn't a stretch to say that there is something demonic at work with the hierarchy and leadership of the Church at large here in the United States. The refusal to say the truth is a deep indication. The men who are guardians of the truth will not announce the truth.

After they were all done applauding their document's passage and were coming out to lunch, various bishops were saying things like "This is the strongest document ever produced on the matter."

Well, they clearly haven't read the Baltimore Catechism (because it was produced prior to 1965) question 255, which reads in part: "He who receives Communion in mortal sin receives the Body and Blood of Christ but does not receive His grace, and he commits a great sacrilege." Likewise, canon law 915 states, "Those who have been excommunicated or interdicted after the imposition or declaration of the penalty and others obstinately persevering in manifest grave sin are not to be admitted to Holy Communion."

Likewise, the 2004 letter from then-cardinal Ratzinger says quite plainly that when "the person in question, with obstinate persistence, still presents himself to receive the Holy Eucharist, 'the minister of Holy Communion must refuse to distribute it.' ... [Such refusal] is reacting to the person's public unworthiness to receive Holy Communion due to an objective situation of sin."

So, taken individually or collectively, those three very simple declarations say it all — the Sacrament must be denied to wicked public sinners. So what do the bishops do in the face of such absolutely clear language?

They create their own sidestep document to completely dodge the pressing issue. And this Sunday, Joe Biden will waltz up the aisle and continue his sacrilege, and the bishops will collectively descend yet another step into the hellfire that awaits them.

Since they have chosen to align themselves so closely to his position, they will join him for eternity in his punishment. Some things are just very clear, black and white, such as Church teaching and the consequences for not adhering to it. But there are some of the more clever ones — those controlled by a demon of obfuscation.

I asked one bishop, "How do you all just continue to ignore canon law on this matter?" Instead of peering over his mask in stony rage and silence — he engaged (in a manner). He responded to me, "Because it's up to an individual bishop to determine whether he will enforce canon law in his own diocese."

"First, that's not true," I said back. "Canon law is the universal law of the Church — an individual bishop doesn't get to pick and choose what universal laws apply in his jurisdiction. As a comparison, that would be like a governor saying, 'I'm not recognizing any of the odd-numbered amendments to the U.S. Constitution.'" That's crazy, just like this bishop's idiotic answer, or rather the demon's answer.

Yet another bishop chose a different path of obscuring the truth. He admitted that's what canon law said, but his obfuscation was to say that the law is not clear — it could be interpreted different ways.

Just how many ways can one interpret "others obstinately persevering in manifest grave sin are not to be admitted to Holy Communion"? Those 15 words are as clear as crystal, and only a demonically controlled intellect could spin things any other way.

Out of perhaps, say, a dozen bishops the crew spoke to, most said nothing in response to that question, while a couple others lied and distorted the truth.

Silence in the face of evil — the great evil of sacrilege or lies or deflections — none of that is holy in origin. Nor, at this point in the game, can any man in a miter claim some kind of ignorance regarding all of this. It has all been well–hashed out ad nauseam.

It's interesting, sitting in the hotel lobby with a couple dozen of the remaining crew (others had hit the road earlier) to hear their conversations and comments and observations about what they saw and heard with their own eyes.

Many of them are younger, and I said to them, "This is why I like you being on the road from time to time. You need to see with your own eyes and hear with your own ears the horrid state of affairs in the Church, right at the top."

There is a demon in control of that conference.

You all see and hear the Vortex every day, and perhaps it can get to be "oh, that's just Voris and his thing." But now you have your very own experience of the evil that has taken over the hierarchy — lies, sidesteps, deflections, silence, refusal to say the truth. Any doubts they may have entertained were blown up those few days in Baltimore.

There is a demon in control of that conference, who prevents the truth from being proclaimed. It operates differently on each bishop, depending on that bishop's failings, proclivities, personality or whatever. But taking all that into account, the demon achieves its desired end — the smothering of the truth.

Everyday normal Catholics who actually do love and embrace the fullness of truth need to realize that this is the reality and become involved in whatever way the circumstances of their own lives permit — and proclaim the truth themselves.

Be careful that the demon of the USCCB does not extend its reach into your mind and soul. 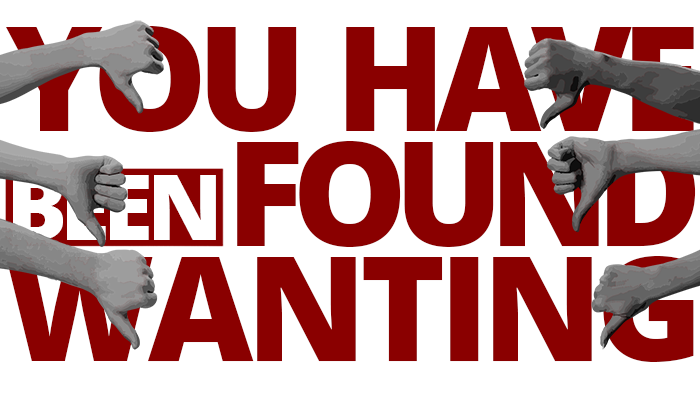 You Have Been Found Wanting
Guilty.