A demolition of a diocese.

Detroit Abp. Allen Vigneron is nearing the end of his term in Detroit, having turned 71 last month — meaning he has less than four years before having to hand in his resignation when he turns 75. Given how recent events have played out, it's worth taking a look at what is essentially the home stretch for Vigneron.

Faithful Catholics hold out little hope that the man who has been at the helm for nearly 12 years — and has managed to accomplish very little — will end his time in Motor City in a flourish.

For example, when he arrived in Detroit back in 2009, various people were anticipating a quick end to the weekly homosexual Dignity Masses going on in the archdiocese — but almost 11 years later, no change.

It would appear that his plan is simply to let them fade away when the Catholic college they're being held at changes hands at the end of the year and stops being Catholic. That, however, does not prevent the possibility of his priests who offer the Mass just pulling up stakes and going somewhere else.

Likewise, there is now the practically notorious handling of the case of Fr. Eduard Perrone.

Perrone was publicly accused of sexually abusing a teenage boy close to 40 years ago, and archdiocesan officials announced it from the pulpit, apparently in violation of canon law, refusing to allow Perrone an opportunity to publicly respond.

Perrone continues to insist on his absolute innocence, and when Church Militant began digging, we discovered severe problems with the case, the most recent one where Vigneron's archdiocesan staff tried to convince a man to come forward and lie about Perrone, saying the priest tried to molest him when he was a youth as well.

So incensed was the man that he sat down for an interview with Church Militant to call out the tactics of the archdiocese.

At various meetings around the archdiocese, held by Vigneron's staff to try and get the priests on board as well as influencers among the laity, the plan has been met with anger and protests, and interestingly, that includes priests of all stripes, traditional as well as liberal and homosexuals.

His clergy, understandably, want nothing to do with trying to extract hundreds of millions from a flock disgusted with the current climate of cover-up and lies.

Add to this another plan that is incensing his own priests regarding the shifting and allocation of assets, and forcing parishes to undergo expensive audits — audits they will have to go in debt to the archdiocese to pay for — and they are hopping mad.

Over a week ago, the archdiocesan Catholic high school De La Salle canceled the remainder of its football season owing to a hazing incident. The principal, in informing parents of the cancellation, deftly side-stepped the issue that the student hazing incident allegedly involved the use of a broomstick and penetration, and according to sources close to the school, tried to cover that up and treat the matter as an internal one, instead of a matter for law enforcement.

And as of this week, the police are interviewing the entire football team. Will or should the principal keep his job after this is becoming a serious question.

One incident after another on the watch of Abp. Vigneron, the way they are handled, is becoming the hallmark of his episcopate in Detroit.

Now he has instituted a major reorganization of his chancery, demoting a number of former major players and drawing his inner circle closer. Yet the continued presence of older homosexual priests and their allies remains a blight on his tenure because these men, many who are pastors, simply do not believe Church teaching, and yet are left in charge of the care of souls.

And recently, word has leaked out that the priest who launched the assault against Fr. Perrone — Msgr. Michael Bugarin — whom Church Militant confronted at the back of Perrone's parish last July when he made the announcement that Perrone was being removed — word is now out that Bugarin is considering a leave of absence from ministry.

Word is now out that Bugarin is considering a leave of absence from ministry.

That would certainly be an improvement since, according to at least one man, the so-called investigation into Perrone has been little else than a sham, motivated by Perrone's long-standing and well-known traditional approach to the Faith.

Even more liberal priests in Detroit whom Church Militant is aware of are a little shell-shocked by all this because of the potential of its happening to them.

That a priest could be publicly accused by the archdiocese, which then grants an interview to the Associated Press, is never given an opportunity to publicly respond, and then it comes out that they are trying to manufacture other victims out of thin air — not one shred of this looks good for Vigneron, who loads of people are wondering why he doesn't bring an end to the Perrone case, for starters, which continues to fall apart more every day.

What Detoit looks like right now is an archdiocese completely out of control, run by an out-of-touch leader, who either has no idea what his subordinates are doing, or does — and doesn't want to intervene.

The clock is ticking here in Motor City, and many are very disappointed that a man they hoped would be able to set things straight almost 11 years ago simply concentrated on money and let the rest of the archdiocese disintegrate.

A question looming on the horizon is this: Given the distant and recent past here in Detroit, what man is going to want to succeed Vigneron in a handful of years? 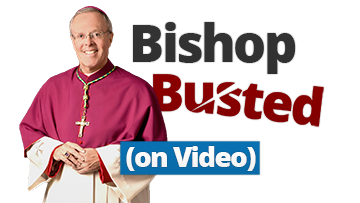