Controlled by the demonic mind.

Picking up on the theme from yesterday on the relationship between government, media and corporate America — what we labeled as an "unholy trinity" — this is truly the "Devil's triangle" because the combination of those three incorporates virtually every aspect of the normal person's life.

If Hell exercises what amounts to operational control over those three entities, so much so that they actually all operate with the same demonic mind, then that trifecta becomes impossible to fight against. What laws are passed, what you are being told, where you are allowed to work, where corporate profits are being poured into and so forth, all of this is the same beast with three different heads.

People's political, informational and economic lives are almost totally controlled by what amounts to a few individuals who all share the same demonic agenda and, as we said, the same demonic mind. These may be three different theaters of operation, but they are all controlled by the same demon. Look at the bishops and ask yourselves if they are providing a counter or a challenge to the Devil's triangle. The answer should be obvious.

The Devil's triangle exists for one reason: so that souls will be damned.

But for most Catholics, even though they may realize deep down that something is way off with the Church, they simply cannot or will not own up to the reality because it's just too disturbing to accept. It's why the bishops keep getting a pass from so many willfully ignorant Catholics.

Even Catholic so-called media types like Teresa Tomeo, the Relevant Radio gang, EWTN and so forth will not explore this topic, partly because it will upset the comfortable existence they make off being part of the Church establishment and partly because they cannot look at it and accept the degree of evil and corruption in the Church.

On that score, agreed. It is extremely difficult on most days to sit down in this business — the so-called Catholic media — and grapple with the notion that the leadership is complicit, directly or indirectly (depending on the particular bishop), with the Devil's triangle. That group would much rather talk about the evil out there than the root cause of it, which is the evil in here, the Church.

So they stick their heads in the sand and their hands in the collection basket and carry on as normal by running pilgrimages, selling books, giving useless speeches to conference attendees and so forth. Meanwhile, the rot expands and the evil grows, but their little garden-party lifestyles and their 401(k) plans remain untouched, for the moment.

The things we're being told are all untrue:

Yet all of these are funded by, promoted by and enforced by the Devil's triangle and then baptized by the U.S. bishops' conference.

Every one of those topics — and many more — are Marxist talking points, yet the supposedly Catholic bishops throw their weight behind them at every opportunity. This is from the same crowd that participated in and/or covered up the greatest predator sex abuse scandal in the world, lied repeatedly about it and then stole billions from the faithful to pay off the debt when they got busted.

Likewise, and even more damning, these Judases continue to engage in their activities of cover-up and coercion by persecuting priests who are finally speaking out and by canceling seminarians who show signs of waking up to the evil of their superiors. And yet, not a word from the Catholic cover-up press about any of it — unless it is to repeat the bishops' propaganda.

The U.S. bishops take the approach to politics that each party has some good and bad in it and therefore we can reasonably choose between one or the other. That may be kind of true, at least the first part. But then again, Hitler and the Nazis got Germany back to work during the Great Depression, improved the roads remarkably and even created Volkswagen, the "people's car."

So what's a little genocide and world war balanced against economic improvement and an emerging middle class? What's a little destruction of the Faith and sex abuse among friends, as we all skip along to being "joyful missionary disciples" while thousands of parishes are annihilated, sold off and turned into God knows what?

On that note, what's the big deal about a homosexual priesthood and episcopate distorting the Faith as long as we all keep recycling and protecting the planet? What's a little theft in the billions here or there and bankrupting of dioceses as long as we can post those BLM signs in front of churches? What's the widespread loss of faith in the Real Presence as long as we can keep up the image that powerful politicians are Catholic so the bishops can pretend that they are still somehow relevant?

The Devil's triangle exists for one reason: so that souls will be damned. That may or may not be the conscious thought of those humans who operate it and profit from it, but it is the conscious thought of the demonic mind who orchestrated it. For the bishops of this nation to cooperate in any way with it is to seal their own damnation. Likewise, for Catholics to not raise their voices against it when they know this is all going on is also to seal their fates.

This is exactly what St. James is talking about in the fourth chapter of his letter when he warns, "Whoever knows what is right to do and fails to do it, for him it is sin." Not wanting to do it is not the point. Whether it's too much evil for you to face or you have a profit motive for staying silent, if you refuse by an act of the will to fight this filth, then you are going to Hell because you cooperated with Hell in keeping the evil existent.

You cooperated by your silence in the persecution of good men who gave their lives for the Church in their priesthood. You kept silent about the homosexual flood into the priesthood and the resulting distortion of dogma. Do not fool yourselves that because you sell some books and say nice things about the Faith and go to Mass that you will escape severe judgment on this account.

You chose the comfortable way of self-preservation and nonconfrontation when souls were being destroyed, when bodies were being abused, when lives were being shattered. You hide behind the skirts of the bishops (who are risking Hell themselves for their own willful participation) and imagine in some fantasy that you are advancing and promoting the Faith.

Remember what Our Blessed Lord Himself says about the lukewarm: 'I will vomit them out of my mouth.'

It is true that you are not heretics, but you supported them in their heresy, dissent and apostasy. You are fools or cowards, and as we also hear in words of Scripture inspired by the Third Person of the Blessed Trinity, you will be damned.

God bless all those truly faithful Catholics who do whatever they can in their own individual orbit to fight these evil bishops who continue to cooperate with the Devil's triangle. If you are a soul who is lukewarm to all of this, afraid of the evil, scared to peer into its enormous depths, then pray for strength and fortitude to do the right thing.

Remember what Our Blessed Lord Himself says about the lukewarm: "I will vomit them out of my mouth." 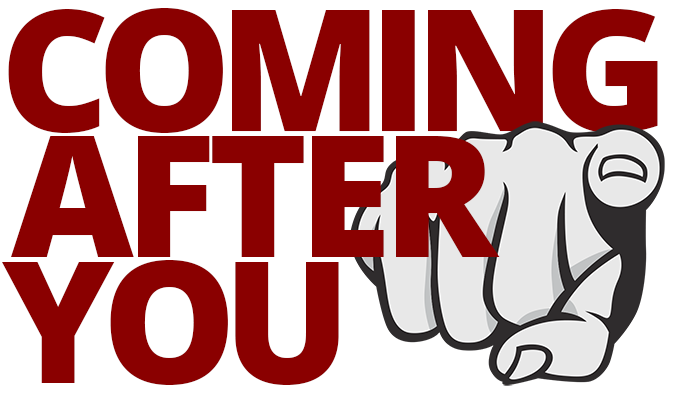 Coming After You
It's all unfolding, right before our eyes.