Many adherents, many falsehoods.

As we said in yesterday's Vortex, all this week we are like so many of you in the "back to school" mindset. We are taking advantage of the end of summer — and "back to school" attitude that defines the lives of so many Americans this time of year — to emphasize a "back to school about the faith" approach.

Pope St. John Paul II caused quite the stir, back in the day, when he wrote and correctly identified that Buddhism is not a religion because it does not admit of a divinity. Buddhism is more of a philosophical approach to life which claims to provide a way to join oneself to a higher state of existence. It is not strictly speaking a religion. Since there is no acknowledgment of divinity within Buddhism, it should be very clear how it stands in relation to Catholicism.

Now, from no deity to a multiplicity of deities, we move to Hinduism. Hinduism presents the problem of a distorted view of the divine as opposed to Buddhism which has no view of the divine. Within the world of Hinduism, there is much debate about if it is truly a religion. Rather, it is better defined as an umbrella term for various religious views and various gods held by various peoples on the Indian subcontinent, largely. A major flaw with Hinduism's diverse religious views is the notion of reincarnation. Reincarnation denies the essential wholeness or unity of man — body and soul — and consequently regards the body as temporal and passing with no lasting importance. Reincarnation is directly contrary to the reality of Catholic truth and does not even internally stand on its own, philosophically.

Confucianism, like Buddhism and especially Hinduism, is more of an amalgamation of various religious or philosophical approaches to life and is much more centered on this world than any sense of the next world or the other worldly. One of the phrases most associated with Confucianism is "the secular is sacred." Like Hinduism, its worldview is largely associated with a particular geographical region and the history of local peoples and their own parochial view of the world and meaning of life.

Each of these largely Eastern philosophies or religious systems have either no particular founder or have been expanded well beyond what the founder or key figures taught to accommodate new views as they cropped up in time. They each have some distantly related understandings of divine principles but begin to disintegrate on close examination on the edges. For example, the existence of a soul is generally agreed upon but beyond that things start to get very vague depending on which "denomination," if we can use that term, you explore. For example, where does the soul come from? What is the purpose or end of the soul? How does it achieve that end? All of these are questions for which none of the Eastern belief systems have any clear and agreed upon answer.

The heart of the problem for the Eastern systems is an unclear conception of divinity. From no God to many gods, to one God with many sub-gods or manifestations, this root problem spawns multiple views and arguments and disagreements over the meaning of life, what the "rules" are and what the "way" of achieving the end is.

Catholicism has no such internal inconsistency because it was God Himself who established it and provided the view of Himself, Divine Revelation, of His Own inner life, which becomes the standard or measuring stick by which all other questions about our own lives and meaning and ways of living become clear. And for the record, none of these cursory treatments of other religions is meant to be a slight against them or to be insulting. But the time has come to call a spade a spade and declare what Almighty God Himself has declared that He does exist, "I AM," and that He exists in a certain manner as three persons in one God, the Blessed Trinity, and from His inner self, He created out of His Own Will that His glory be shared by His creatures. For this, He incarnated and established a Church to keep consistent and pure His message of salvation until He returns.

Far from dismissing and insulting other world "religions," the Church seeks to reach out and help them understand how their current dim understanding of some truths of the Divine correspond to greater truths and realities of the divine. There has been too great a rush, a near stampede for too many in the Church to lay aside the glories of the Faith so as to embrace other religions and make everything appear to be just different paths to the same God. Nothing could be farther from the Truth. Only the Catholic Church leads to God because only the Catholic Church was established by the One God. 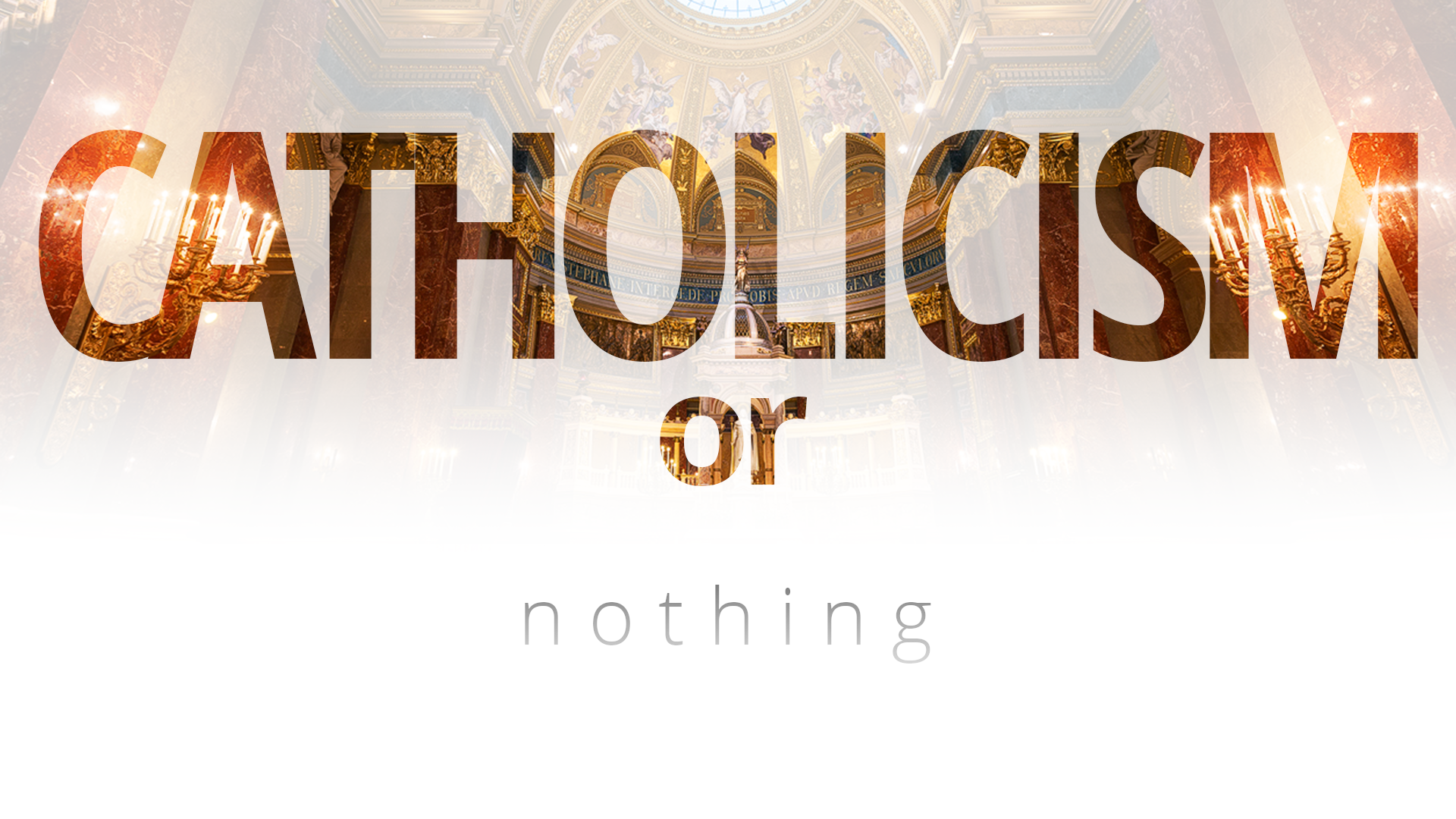 Catholicism or Nothing
Christ is an all or nothing proposition, and He isn't nothing.