Their entire empire is built on lies.

At this moment, we still do not know which man will be taking the oath of office on Jan. 20 because of multiple lawsuits, recounts and audits — not to mention reported attempts at straight-up voter fraud through voting software and machines.

Regardless of what the Marxist media tell you and what the U.S. bishops say, it ain't over until it's over. But however it turns out, what need to be clearly understood (from a Catholic point of view) moving forward are two important points.

The first is that Trump completely remade the rank and file of the Republican Party, inverting American politics so what used to be seen as an elitist party of the rich is now the party of the middle class and working man — in short, the "little guy."

That's a drape the Democrats wrapped around themselves for decades, even though they didn't really ever act on it — they just pretended to be fighting for the little guy. The second point is this: In aligning themselves so well with nearly every major talking point of the Democrats, the U.S. bishops, as a body, have joined the ranks of the elites, hammering on the little guy.

The USCCB (and now Rome) treats "little Catholics" just like the Democrats treat the little guys. They lie to them, take their money, promise reforms, transparency (and so forth) and move along completely unaccountable for breaking every one of these promises.

They, like Democrats, are emboldened by getting away with the stuff they get away with. It is rare — if ever — that you will find a whistleblower wearing a miter. They don't rat each other out because all their fingers are in the pie, one way or another.

The bishops, and now Rome, have never really cared about the little Catholic for any time in living memory. They abandoned tens of millions to the vicissitudes of the day. Whatever came along — heresy, spiritual poison, you name it — it had to be dialogued with and understood from a "nuanced" point of view.

Authentic Catholicism was understood by these homosexuals, thieves and liars as something of an embarrassment. So over the decades, it was watered down, massaged, discussed ad nauseam, until so little of the original remained that it was barely recognizable.

Tolerance for individual sinners, a good and merciful thing, was expanded wildly to tolerance for evil principles, which opened the Pandora's box to a laying waste of the Faith. If it turns out that Biden is the one taking the oath on Inauguration Day, it will be in small part because the U.S. bishops rolled out the red carpet for him, splitting the Catholic vote right down the middle.

The Evangelical vote, by comparison, went 86% for Trump. Ain't that a real knee-slapper? The Evangelicals, absent a crooked hierarchy, have been able to dodge the brainwashing of "social justice" and keep most of their moral houses in order when it comes to political awareness.

One word here, however: While it's not the point of this Vortex, until Protestants get it right on contraception, the country is doomed — not to mention souls. Protestants need to finish the thought on morality. Contraception was the first domino to fall, pushed over by the Marxists so as to destroy the family and institute the State as god.

But back to the bishops and their treachery: Protestant leaders are not successors of the Apostles — the bishops are. And to have delivered a nation into the hands of an elitist, atheist society of Marxists bent on world domination will be to their everlasting shame.

For all their and Pope Francis' pretending to care for the poor, they sure have a funny way of showing it. According to Joe Biden, when he spoke with the pope to receive his congratulations, the two spoke about their shared concern for the dignity of all humans and climate change.

What a crock. If the pope didn't tell Joe that he is excommunicated for his support for child murder, then precisely what sort of conversation did the both of them have about the "dignity of all human beings"?

And the nonsense about climate change being caused by man is just that — nonsense. Pope Francis, either stupidly buying into the Marxist propaganda or being an actual willing part of it has linked up with the globalist elites.

And that has given the green light to the Marxist bishops in the United States — you know, the ones who care for the "poor." And how precisely do they "care for the poor," especially those around the world? By supporting governments that support abortion and contraception, that's how.

Biden has already said publicly that he will end the Mexico City Policy immediately. Well, that's $8–9 billion going straight to international abortion and contraception groups. It's hard to believe the bishops and Pope Francis don't know about that. And if they do know about it, how is that not supporting a government that uses abortion and contraception to "fight poverty"?

The elites of the world fight poverty by killing the poor. First, they try to prevent them from being conceived, and if the truly little guy makes it past the pill, the condom, the IUD or the implant, then they just chop him up and kill him.

And not only do the elites fund organizations that murder children, a Joe Biden administration, like every child-killing administration, will make foreign aid to struggling nations dependent on them adopting abortion as national policy.

A Joe Biden administration will make foreign aid to struggling nations dependent on them adopting abortion as national policy.

And for the record, the nations whose people are being marked for extermination just happen to be people who have dark skin, so when the Democrats and the bishops go on about racism, they can blow it out the hypocritical you-know-what.

Perhaps the real cause for their celebration of all things Democrat is the embrace of sodomy — something too many of them have more than just a passing knowledge of. Again, do you think the pope mentioned to Biden that performing not one, but two gay civil "weddings" excommunicates him from the Church?

It certainly reveals the lie of the USCCB's claim that "President-elect [sic] Biden professes the Catholic faith."  No. He doesn't. The man hasn't received a worthy Holy Communion in decades. Nothing but sacrilegious.

And for the record, since the bishops en masse have promoted and advanced his and the rest of the Party of Death's evil, the same can be said about them. Think about that the next time you see one of these homosexual, pro-sacrilegious-Holy-Communion destroyers of the Faith celebrating Mass.

As St. Paul told the Corinthians, "They eat and drink their own damnation." The Vatican and the bishops just need to come clean: They are part of the global power structure (see the China accord hammered out by their favorite homopredator cardinal whose network they refused to reveal in their whitewashed report from last week).

They care about the little guy only insofar as it allows them to smuggle in Marxism under the guise of "love for the poor" (which Marxism always dresses itself up as). Their entire empire is built on lies. The elites lie, cheat, steal and kill — and that includes the hierarchy. 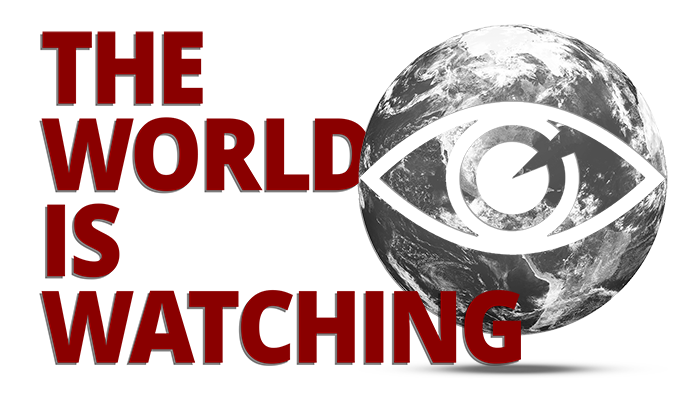 The World Is Watching
Catholic Poland is counting on the truth to prevail.