The Floor of Hell

The oft-quoted line from the Patristic period of the Church — the floor of Hell is paved with the skulls of bishops — has taken on a new sense of urgency in our own day. The U.S. hierarchy has more belief in and devotion to COVID than they do of the Blessed Sacrament. And on the specific point of the Blessed Sacrament, there's no easy or more straightforward way to say this other than that the U.S. hierarchy (collectively) is on the road to Hell for its refusal to condemn Joe Biden's weekly sacrilege of receiving Holy Communion.

Likewise, not only is it the case that Biden presents himself, but then they give him Holy Communion. They are on the record publicly declaring he can receive Holy Communion, and that they will give him the Body and Blood of Our Lord. They deliver — knowingly and in full consent — the precious Body, Blood, Soul and Divinity into the hands of an actual child killer, who, with almost guaranteed certainty, has already excommunicated himself for his persistent, public manifest sin.

He directly violates canon law every time he gets in the line for Holy Communion. The deacon, priest or bishop who gives him Holy Communion directly violates canon law. Joe Biden is excommunicated by virtue of his own action, yet no bishop in the United States publicly acknowledges that. And you can count on one hand the number who publicly say he shouldn't be receiving.

In fact, by our count, more clergy have come out and said he should receive than have said he shouldn't. How is it that the vast majority of the U.S. bishops hope to escape Hell? And their disbelief in it won't save them from it. In fact, it virtually guarantees their going to it.

How is it that the vast majority of the U.S. bishops hope to escape Hell?

We're reminded of the famous quip by Bp. Sheen when he was giving a talk and a lady in the front row piped up and sneeringly said, "I don't believe in Hell," to which Sheen instantly responded, "You will when you go there, madam." Nor will the milquetoast pansy approach of Bp. Robert Barron that ''we have a reasonable hope that all men are saved."

How, precisely, Your Excellency, do we have such a hope? Based on what? How does a prelate who looks the other way on sex abuse, refuses to condemn public sacrilege, covers for fellow clergy who are part of a homo-clergy network that lies, steals, covers up predation; how, precisely, would anyone have a reasonable hope that such a man would not be damned to the fires of Hell? In fact, what would be the ''reasons'' that any such individual would hope in his salvation? He lived a life opposed to salvation. Why would he want to be saved?

Salvation has a dual aspect: a person is preserved from Hell but also saved for God. His desire is to be with God, living everlastingly in the Beatific Vision, seeing God in the face. Yet here on earth, they spit in His face. They cover His face so that others cannot see it or approach it. They allow souls like Joe Biden to commit sacrilege against the God they pretend they want to be with for eternity.

This is madness. There is no truth in these despicable men. They have a duty to Joe Biden and all other Catholics to end this confusion and abomination. Yet, in contrast to ending it, they actually perpetuate it. How can their destiny be anything other than Hell?

Saint Paul himself said, "Anyone who eats and drinks the body of the Lord unworthily, eats and drinks his own damnation." Did the Blessed Sacrament become a little less the body of Our Lord since St. Paul penned that? Do the bishops believe the Lutheran lunacy that what looks like bread has a dual substance of bread and God? In fact, do the bishops even know what they believe about the Blessed Sacrament?

They permit all kinds of irreverence against it; they routinely permit sacrilege against it. It's just that the case with Biden elevates the scandal to a worldwide level. And the Marxist world is capitalizing on it, with the media arm producing articles and nonstop reports of how Biden is ''redefining'' Catholicism in America and so forth. Biden not only lives in a state of mortal sin and sacrilege, he has become the poster boy for it. And the Hell-bound bishops sit by quietly, most saying nothing, some cheering it on, all rocketing toward eternal perdition.

For the crowd that usurps its authority every single Sunday by ordering faithful Catholics to put on a mask to enter their churches — motivated out of pretend charity and love of neighbor — where precisely is their ''charity'' toward Hell-bound Biden? They go on and on about preserving the body with all their idiotic, non-scientific pronouncements on masks and vaccines. But when it comes to souls, they literally consider that Biden can just go to Hell. He won't be descending into the Lake of Fire alone, that is guaranteed.

Bishop Sheen, again, said, "The surest way to get to Heaven is to take someone else's hand and lead them there." Well, if that's true (and we are assured it is true by St. James' last two verses), then the opposite is also true: The surest way to be damned is to shove others into Hell with you.

The surest way to be damned is to shove others into Hell with you.

As Church Militant has been saying for well over a decade now, the U.S. hierarchy has no supernatural faith. They view the Church as a business, nothing else. They see themselves as CEOs of a shrinking company. They hire marketers; they churn out false advertising to their customer base; their product is inferior; their staff are incompetent yes-men.

They long ago changed mission and product and now sell cheap knock-offs from an inferior manufacturer. They are selling off assets, laying off personnel, constantly reorganizing themselves and refusing to listen to their shareholders. For the U.S. hierarchy, this will not end well. Just as sanctification, the life of holiness that leads to Heaven, begins in this life, so too does Hell begin here.

A self-created cross, one made with your own hands, merits you nothing. Such a cross was not fashioned by Our Lord for you; it was fashioned by your own sins and has no salvific power. A cross from Christ has value and becomes the path not just to our own individual Golgotha, but also to our own Easter Sunday. But a cross formed by our own unrepentant sins not only has no salvific value, it is actually more difficult to carry, and many people actually die from its weight. But all end up worse, in this life and the next.

The disastrous condition of the Church right now is not a cross from God; it is a cross that is entirely the making of a hierarchy that has betrayed Christ and allowed the sheep to ramble off and be devoured. The most visual example of this reality is the nonstop parade of child-killing, sodomy-supporting, euthanasia-backing, infanticide-funding, contraception-loving, gender dysphoria–promoting, phony-Catholic political leaders being not only allowed but actually celebrated and supported by the hierarchy for their sacrilege.

Like all non-believers devoid of supernatural faith, the bishops virtue-signal, creating a substitute morality with the phony science of COVID and climate change assuming theological dominance. These fraudulent Catholic politicians have excommunicated themselves for their monstrous, continual, ongoing sins against life, charity and justice.

What else would be the fate of the bishops who permit and support it, other than Hell? 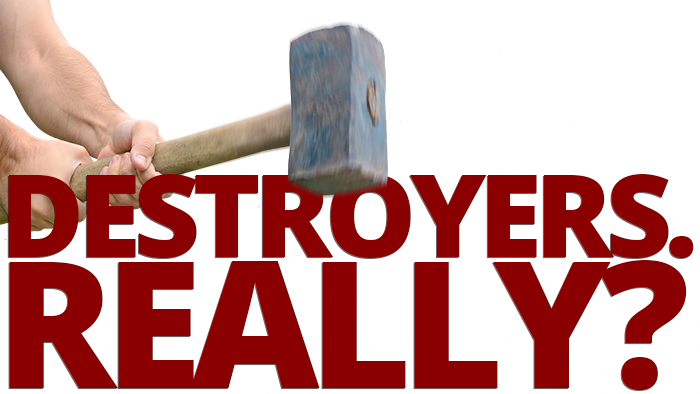 Destroyers. Really?
You have to first destroy, to build.