The Gates of Hell

I'm Michael Voris coming to you from Caesarea Philippi about an hour north of the Sea of Galilee, where Our Lord made Simon Peter the visible head of the Church, as recorded for us by St. Matthew, who was an eyewitness.

When you travel the countryside, you get an appreciation for the time and effort travel on foot must have taken back in the day, and getting here would have been no different.

Even the geography tells you something of the importance of Our Lord's purpose. It would have been an arduous trip here and back to Capernaum, yet the Son of God brought His Apostles to this spot specifically.

He could have changed Simon's name to Peter and made him head of the Church sitting in Peter's house in Capernaum.

In fact, in some ways that might have made more sense, humanly speaking. But, unlike what people such as Fr. James Martin suggest, Jesus Christ was not just a human with access to the Divinity or some divine knowledge from time to time. He was God Incarnate, and He knew it.

So God brings the band of Apostles up here, to the base of Mount Hermon, for a specific reason: to directly challenge the established world order and make clear the mission of His Church.

First, this was, at the time, an area with a long history of pagan worship of many, many gods. That worship frequently included human sacrifice. Victims would be tossed alive into a pool in this giant cave, the waters of which are one of the main supplies of the River Jordan.

Caesarea Philippi was, in fact, a kind of microcosm of the existing understanding of theology — that there were many gods worth worshipping and all worship to whatever god was pretty much fine.

Call it the ancient version of "all paths pretty much lead to God" — or in this case, gods, plural.

This is intolerable to the one true God that man be deprived of knowledge of Him because of a flawed ethos foisted on the world. So He came here, to this plot of earth, to overturn that apple cart. There was only one God and the world order needs to be changed.

He also made clear to His Apostles that the mission of His Church — to which He would give His own power and authority — would be to storm the gates of Hell and defeat Satan.

For the moment, it was Satan who ruled the world, through men's hearts, and that status quo could not be allowed to stand.

So the Church would go on the offensive against the demonic. Its mission laid out in stark militaristic terms. Take no prisoners. Tear down the gates of the diabolical kingdom and overrun it; the Church Militant — aptly named.

Man He had created for Himself, made even in His own divine image, and God wanted man back. And for this, He established His Church — the Catholic Church — not any other, because, in truth, there is no other Church. There can't be. What was established here was the reality of Christ's bride, for whom He would travel to Jerusalem in short order and give His life for.

God, the author of marriage, does not have multiple brides. He has one: the Catholic Church and She alone. So He comes here to this region, establishes His Church right on the very spot representing all in the world He came to conquer.

Then He issues the orders to His followers and tells their leader that he will be given the keys of the Kingdom of Heaven, the keys to forever lock and seal the gates of Hell.

Nothing the Son of God did or said was ever without meaning and significance to our salvation. And making the arduous journey to this spot was meant to convey a message and a mission.

It isn't politically correct today to talk about one religion being superior to all others. It isn't kosher to insist on the objective rightness of Catholic teaching compared to any and all other religions.

But Catholics do not answer to the world on matters of morality or theology or things divine. There is nothing that the world can teach the Church in these areas.

The Church was established by the Son of God to extend Him and His sacrifice throughout out all time and space for the sanctification of men's souls so that they might be saved.

The mission of the Church is to announce that God loves unconditionally, but He does not save unconditionally. As the normal routine, as He Himself said, "Unless you eat the flesh of the Son of Man and drink His blood, you have no life within you."

Church Militant is here in Israel on production for what we hope will be a very instructive and meditative documentary on the heart of the Faith, the Holy Eucharist, produced in the land where it all began.

Please keep our travel and work here in the Holy Land in your prayers. 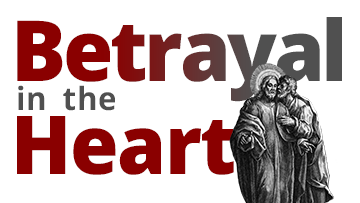 Betrayal in the Heart
They do not believe.