It doesn’t have to be this way.

I'm Michael Voris, reminding you to log on directly to churchmilitant.com and not rely on social media giants to alert you to our productions.

As attempts to normalize homosexuality by high-ranking clerics roll along, it's worth noting that there is little else that could be done that would be less charitable than to "support" someone by telling them that their condition is normal and good. We don't tell alcoholics it's okay to get smashed because they want to and have solid reasons to. We don't tell people affected by other troubling sexual issues it's OK to act on them — at least we shouldn't — although Democrats and liberals do.

The very reference to a person as "gay" is a horrible thing. Each person is a creature made to the image and likeness of God; after that, we are all subject to the same set of pains and woes present in a fallen world. In the case of someone afflicted with same-sex attraction, we need to understand that something or some things happened in the person's life — more than likely their very young life and this is how their mind responded.

The canard being touted that someone is "born that way" is a lie because if they were "born that way," it also means they were conceived that way, and there isn't the slightest bit of data to even begin to suggest that is true. There are not gay fetuses floating around in the wombs of mothers. There are children in utero with all the flaws of a fallen human nature and who have personalities that leave them susceptible, as we are all susceptible, to the pitfalls and hurts of life and inadequate responses.

Before the American Psychiatric Association was railroaded by having its annual meeting stormed by homosexualists back in the early 1970s, homosexuality was considered as one, among many, psycho-sexual problems. As a quick aside, to see much more about this, please view our FBI on homosexuality, see the link below. The mind, the psyche, which has turned to acting out on homosexual desires, is a deeply wounded psyche. It, like many other psyches, has experienced a great pain, a rejection, an absence, an abuse or series of abuses and internalized all this into the need for affection from the same sex which ultimately becomes sexualized. The young mind has no mechanism for properly coping with unmet needs and so it turns inward, looking for some solace.

Some personalities are extremely sensitive and need more care and attention than mom and dad might recognize. If physical or social or emotional abuse — or at least what the young boy or girl perceives to be abuse — happens, then all feelings of safety are gone. If a child does not feel safe and loved, whether the reality is true in fact or not, if the feeling is present in the child, all bets are off. Psychologists pinpoint the age from 6 months to 2 years old as a rapid and template-forming "grid" of psycho-sexual development. If something or some things go "wrong," again either in reality or in the perception of the child during this time, it can cause problems well into adulthood and perhaps for the person's whole life.

Depending on the deep needs of the child, things which could go wrong could be as simple as a lack of affection or attention by dad or a perception that he is threatening, for example. In the case of a normal or reasonably healthy development, sudden abuse — physical or emotional — could alter that psycho-sexual "grid" and result in the same types of problems. None of this makes the acting out on this pain moral or good. In fact, just the opposite occurs. The acting out on all this actually reinforces the self-perception, resulting in increased and practically over-the-top need for acceptance and off-the-charts fear of rejection.

For the same-sex attracted man or woman, there is deep rage resulting from being a victim, truly a victim. The feeling of being robbed and cheated out of feeling safe and protected engenders deep animosity and envy and turns the victim — and this child was a victim — turns him in on himself. Life, oftentimes, becomes a continual struggle to achieve some measure of self-worth, overcompensating for the worth he was denied but in justice was owed. If that translates into multiple anonymous sexual encounters, then so be it, but the cycle is never broken.

For Catholic priests to encourage this pain by pretending it's okay, God-gifted and should be followed is horrendously evil. Likewise, Catholic priests who suffer from this personality disorder, like any other people suffer from many other disorders, these men should not be ordained. They don't have the outward-facing capacity to be "fathers" because their own fathers denied them something they are now spending their lives in endless pursuit of. They need to be helped out of the life, not out of the closet. They have been victimized, deeply victimized in their tender years. To now tell them to wallow in their victimization, physically and psychologically, is to victimize them all over again but now even to a greater extent because the weight of moral guilt now attaches.

Homosexuality is not from God. It is one of many many horrible refuges that damaged psyches go to seek relief. Welcome to a fallen world. It is not the mission of Catholic clergy to prevent spiritual growth and rescue. It is the mission of the clergy to show men the path to God and very frequently that means repairing deep damage the person is not responsible for in the first place. Recovery is painful, stark, frightening, looking at demons who seemingly have total control but whose death grip must be broken and can be broken. All it takes is truth and love which are one and the same.

For priests and cardinals to foster the lie that all this is fine and good is a horrible filthy rotten disgusting thing for a supposed "father" to do. Whatever happened in the past, this doubling down is even worse. It leads souls to Hell as if the Hell of feeling insufficiently loved in this life wasn't painful enough.

To any souls out there suffering from same-sex attraction, there is a way out. There is a way out. Whatever happened in your early years, you may not even be aware, but aware or not, whatever happened, it does not have to set the pattern for the rest of your life. Your identity is that you are a child of God — period. Everything else you are hearing is lies. Don't ask or pray or cry to God to make you not gay. Ask Him to walk the path with you, with all its scariness, back to how you were meant to be and someone or someone's robbed from you. 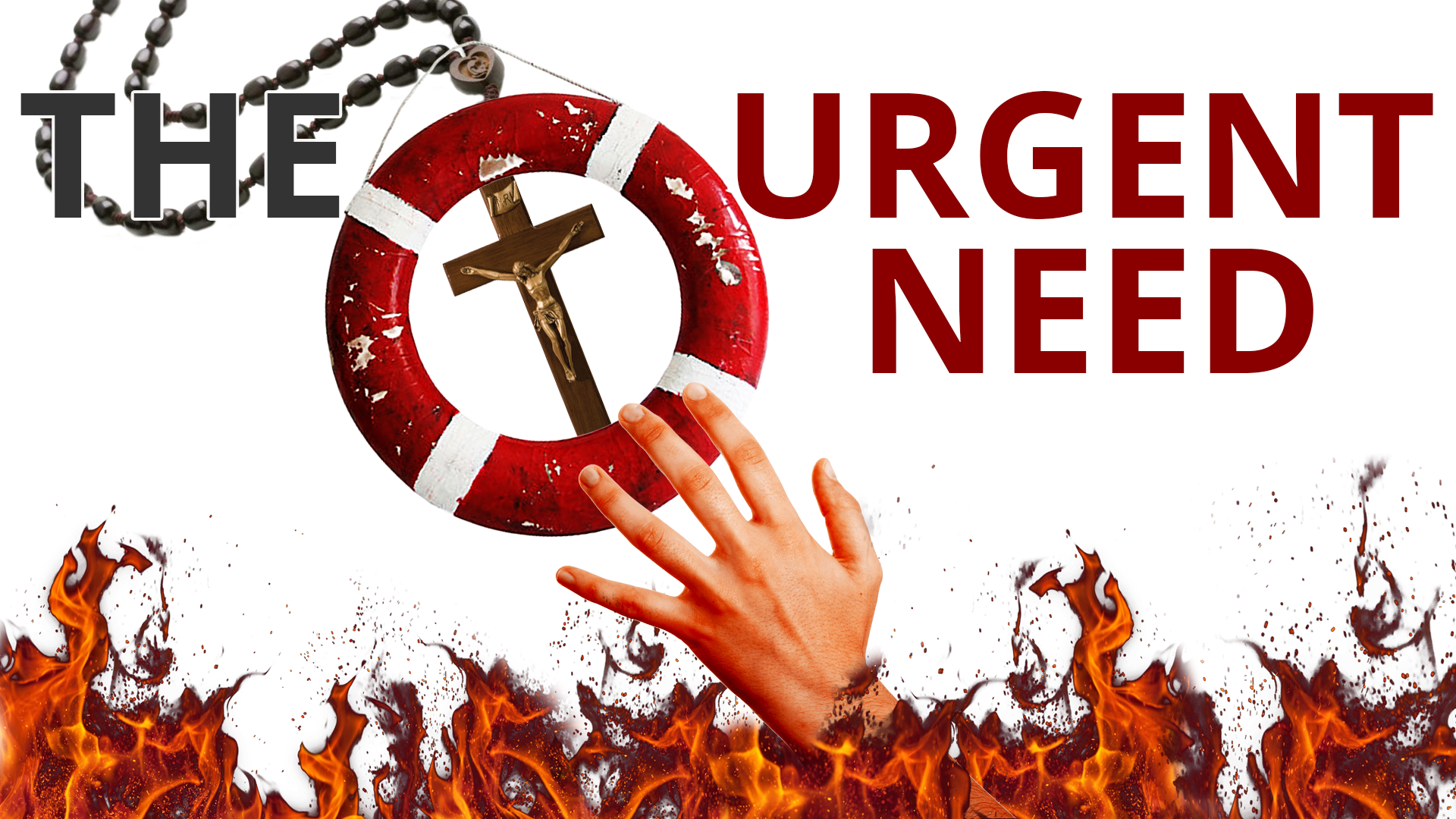 The Urgent Need
Do it now!