And it is a PROBLEM.

Father James Martin is not going to like this one.

Men who see themselves as "gay" should not be ordained — period.

Why? Because homosexuality is a psychological disorder which can too often end up damaging the lives and souls of not only those afflicted, as nearly all afflictions can, but in particular the damaging effects of homosexuality can be transferred to the sheep who entrust themselves to the spiritual care of such men.

And as an aside, just because the American Psychological Association was politically bullied in 1975 to declare homosexuality "normal" does not make it so — it's not.

It is always the result of a deep wound, almost always not the fault of the person but nonetheless his to now suffer with. It is a cancer of the mind and self-image. The man who sees himself through the lens of being sexually attracted to other men can never be psychologically healthy enough to minister in the priesthood, and this is true even if the man remains completely chaste.

This issue is not one of chastity, but one of psychological fitness.

The priesthood is a place where healthy men who are well grounded in their identity as a man can put themselves on the line for the good of their sheep.

The reason psychological health is so necessary in this regard is because this is the precise aspect of the soul of the priest which enables him to move beyond himself for the sake of the other — a true altruism. A man who is wounded psychologically cannot behave in this manner because he is too concerned with addressing his inner pain, consciously or unconsciously.

Gay priests are just not capable of giving themselves totally to the sheep. In truth, most men are not really capable of that, which is why most men cannot and should not be priests.

It's also one of the reasons we see such failure of fatherhood and husbandry in the society at large these days because most men have had their masculinity stripped from them through broken families or media glorification of everything bad in masculinity and a hundred other causes. No man who sees himself in any distorted way should be ordained or even admitted to seminary.

But a flood of psychologically wounded men, wounded by their homosexuality, have been allowed into seminary and been ordained and a large percentage of U.S. bishops are included among them.

These men — owing explicitly to their pain from this psychological illness — seek each other out, a "misery loves company" kind of mindset.

They form cliques, associate with one another, embolden one another, in some cases rationalize sin for one another, and their priesthood becomes a gay-centric priesthood not really about the people as much as it is about themselves. They become the center of parish life, Masses become about them, their homilies are personal stories meant to elicit warm and fuzzies from the pewsitters, the Church itself becomes not a door to salvation, the gate of Heaven, but a large treatment center for their illness.

The gay man is terrified of rejection on a foundational psychological level, and owing to this, will not preach the hard truths of the Faith because when the inevitable blowback comes, he takes it personally.

In fact, everything about his life is inward-turned, it's all personal for him. Many of these men go on personal crusades to get the parish to "accept" them. It becomes the focus of their entire priesthood, and when they rise up the ranks, they bring in others who see the world through the same lens.

Those men get promoted to vocation directors, rectors at seminaries and so forth.

And it doesn't take long to see how seminaries could easily become a ticking time bomb where homosexual men in power, unstable in their own psychologies, begin lusting after seminarians subordinate to them.

Effeminate men are welcomed into these environments not because they have a genuine call to serve at the altar, but because they represent a steady supply of fresh meat.

Men who have a genuine calling are screened out, precisely because they are psychologically healthy and offer very little chance of ever succumbing. This is the world the seminaries in the United States — and other countries — have operated within for decades.

Why are so many priests swishy? Because bishops and vocations directors and directors and so forth are homosexual themselves and have made it a point to turn the priesthood into a gay profession.

James Martin himself even recently said there are thousands of homosexual men in the priesthood in the United and the priesthood would essentially collapse if every priest who was gay was tossed out.

Regardless of what pro-gay Cdl. Cupich says, all of this crisis in the priesthood is exactly a gay thing.

It was gay men preying on minors that was the heart of the issue revealed back in 2002, something gay bishops did not want talked about, so they were happy to go along with Theodore McCarrick when he said it's not a gay thing, but psychological immaturity, as he trotted back to his notorious beach house to sexually assault the next group of vulnerable seminarians while his gay brother bishops looked the other way.

And as Abp. Viganò has flatly stated in his testimony, the heart of this problem is a homosexual network in the priesthood and huge numbers of bishops and cardinals are all part of it.

So Catholics, let's deal in reality here and not allow homosexual men — many who are active — who have devastated the Catholic priesthood set the narrative.

There is only one narrative which is truthful: This is a problem with gay priests. Until the good bishops come to terms with this, it's going be one heck of an uphill struggle. 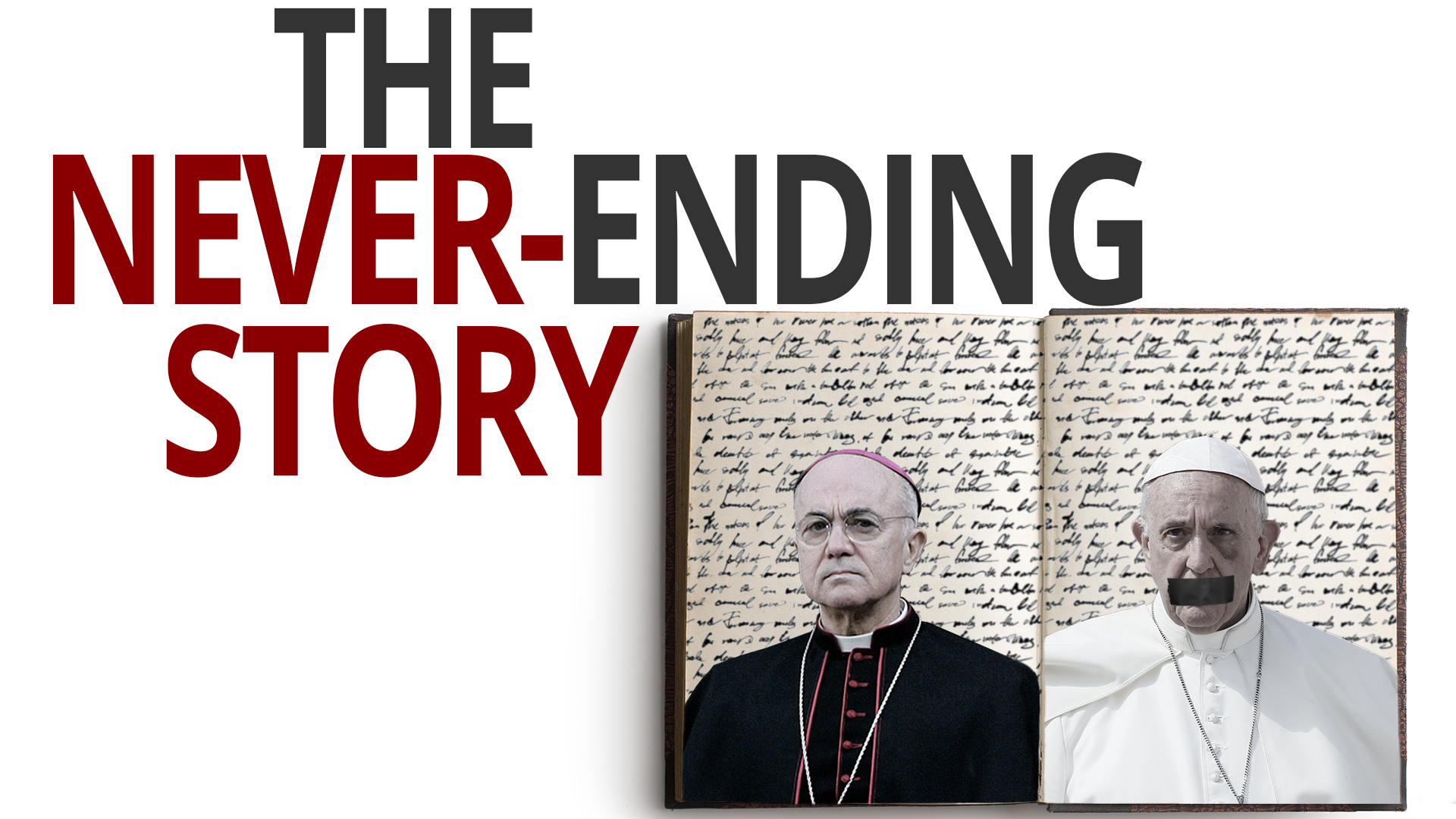 The Never-Ending Story
And it's going nowhere.