The Good News vs. Fake News

It's all part of the same big picture.

If you aren't a big-picture-type person, this Vortex is especially for you. Some folks are very detail-oriented; others are big-picture types. Each has its strengths and weaknesses. Big-picture types are the ones who "get it." But they also have a tendency to blow over or not even notice little markers along the way that are creating the big picture they see.

Likewise, detail-oriented people understand a level of minutiae that confounds the "average Joe." But they also often simply get lost in the weeds. At Church Militant, we have a decent grasp of what the big picture is and how it develops. The big picture, of course, is salvation/redemption and the eternal destiny of each soul, Heaven or Hell.

But that overarching theme of human history isn't all there is; it's just the most important as it's the capstone of existence under which everything else is fitted. The failure to understand that is yet another indication that the bishops, collectively, are simply horrible shepherds.

With their insanity in never mentioning Hell, sin, the Devil or spiritual warfare (with the Barron-promoted evil that we have a reasonable hope that all men are saved), not only do they not get the big picture, but all the smaller "big pictures" make no sense either.

The good news is that you don't have to end up in Hell. If you ignore that escape hatch, however, you will.

Human history has a plot, just like a good story. Stray from the plot and nothing in the story makes any sense: the characters, their motivations, their actions, the flow — nothing. Such a story just becomes a rambling chaos of disconnected events. It still might be cleverly written here and there, but, in the end, there isn't an end.

There's a simple reason every good book, movie or stage play has a plot, a good guy, a villain, critical moments and a conclusion. It's because art imitates life, the spiritual life, the ultimate reality. Everything on earth — the natural order and how it is set up — is merely a reflection of the supernatural order. Justice, love, mercy, truth, sacrifice, joy, evil, malevolence, lies, pride, lust and violence all exist on earth because they first existed in the supernatural realm and then flowed into the natural order.

They are the building blocks, so to speak, of a fallen world, and the war on earth is a battle over which of these sets of qualities will win out in each individual person. All of this is human history, but among those building blocks are ones that actually prevent the building from being properly built.

With those in the mix, man can never successfully build anything. It is impossible. So we need an outside agent to help us overcome and eliminate the negative and the evils as much as possible so that we can build successfully. Mankind needs a savior or it is condemned to radical failure, here and in the next life. And let's be very clear that fallen man's destiny is misery and eternal death. From that truth, there is no escape. In short, on our own, we are doomed.

However, there is hope in the Creator, the Eternal Logos Who comes to this fallen, doomed world and shows the "escape hatch." There is a way out. It's a very narrow opening in the wall. It takes a mighty struggle to first reach it and then go through it. But it exists and, even better, every single human being is capable of finding it and escaping.

That is what is meant by what Christians call "the good news." The good news is that you don't have to end up in Hell. If you ignore that escape hatch, however, you will. Despite our inability to save ourselves, there is still hope that we can be saved. We'd say that ranks pretty darn high on the list of "news that is good."

Turning to the world media, for example (something Church Militant is very focused on), it is interesting that while we have the good news, we always have fake news. Fake news on earth is set up to directly counteract and oppose the good news given us from Heaven, and the reason is simple: Fake news is comprised of lies aimed at making you lose sight of the big picture.

The term "fake news" was, of course, popularized by Donald Trump during the 2016 campaign and employed regularly during his presidency. Donald Trump obviously was not and is not the savior, but he did help create a political and cultural environment where the good news could be more easily preached and pursued. He was, and still is, at least on some level, cooperating with natural virtue, a necessary first step on the road to discovering the escape hatch. For that reason, he had to be opposed by the anti-God forces. So the fake news began.

Whatever we think about the so-called vaccines, it was Trump who got them to market in record time, something the fake news lies about. Trump also pushed for hydroxychloroquine, but the fake news lied about its efficacy. Trump's southern border policy was extremely successful compared with the current crisis that has no end in sight. Last month alone, nearly a quarter-million illegal immigrants were apprehended, the highest total ever, and no one knows how many successfully made it in.

Fake news not only lied about but actually created the entire Russia narrative to drive an impeachment effort. Fake news lied about and covered up the Hunter Biden laptop story. They lied about the Lafayette Square being cleared for a photo-op incident, a lie that Cdl. Wilton Gregory was quick to embrace and, like so many others, has never backed away from.

What else did fake news lie about?

Clarity, vision, understanding, honesty, knowledge — all pointing to the Truth: That is the only way to find the escape hatch.

Clarity, vision, understanding, honesty, knowledge — all pointing to the Truth: That is the only way to find the escape hatch. That escape hatch, of course, is Our Blessed Lord and His Church, the only Church, because He established only one Church.

And just as the lies and falsehoods in the secular order must be exposed and fought against, so too must the lies and deceptions within the Church, because all lies — from the world or Church leaders — have the single goal of preventing you from discovering the escape hatch. Ultimately, fake news is in direct contradiction to the good news.

This is the driving force behind Church Militant's upcoming Catholic Info Hour, debuting on Tuesday, Sept. 7, 2021, the day after the U.S. Labor Day holiday, at 7 p.m. ET. We have deliberately chosen this time slot to stand in direct opposition to the empire of fake news, all of which itself airs at that hour. Tune them out; tune us in.

Please tell your friends and family, and make this "appointment TV" for yourself. The media, the great purveyor of lies, must be recaptured. This is our effort here at Church Militant to do just that. 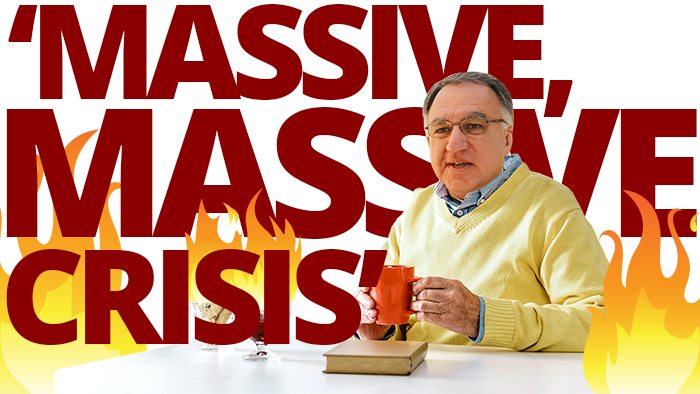 ‘Massive, Massive Crisis’
Actually, it is more massive than you think.