We have to do this.

I'm Michael Voris, coming to you from the Reawaken America Tour in Virginia Beach, Virginia, this past weekend where thousands of American patriots packed the rafters to listen to a dazzling array of subjects and speakers — all of them aimed at taking back America from the communist influence swamping it. In fact, its overall theme is writ large with the messaging of the Great Awakening vs. the Great Reset. It's a message that resonates perfectly in this crowd.

What's most interesting about events like this, again, routinely attended by thousands of patriots, is just how under the radar they are for the average American. The Marxist media has no desire whatsoever to cover these kinds of things — just the opposite, in fact.

As a result, a virtual, and we do mean virtual, cottage industry has grown up and provides wall-to-wall coverage on its own websites and livestreams. Almost two dozen niche politically conservative websites and citizen-journalist outfits were present, streaming and providing content and information to a combined audience of hundreds of thousands (touching a million or more by conservative estimates). Even more big-name conservative outfits like Epoch Times were present — also streaming the message and providing commentary and analysis and keeping the troops back home updated.

All of this is, of course, still somewhat in its infancy compared to the Marxist media, but every passing year, this combined effort is reaching more and more Americans — normal Joes fed up with the Marxist dominance of the culture. The smarter outfits like Church Militant have long since figured out that any of this could be canceled by Big Tech, and we've spent a fortune ensuring we have our own servers and platforms and are not as easily unplugged by Big Tech.

However, there is one aspect to all this that we at Church Militant and faithful Catholics have got to bring up. These events (and the ensuing coverage) are largely organized through Protestant congregations and their ministers, who are on board with the narrative. There is plenty of talk and billboards and flyers extolling God, Jesus and faith — but it's all Protestant.

With the exception of Church Militant, there is not a single official or even semiofficial Catholic presence there or, in fact, at any events like this anywhere around the country. Think of the incredible evangelism opportunity being missed here at events like this.

Aside from media, there is what's called "information alley," where vendors are hocking shirts, books, pamphlets and so forth. Not a single Catholic table anywhere. Do Catholics really have nothing to say about the direction of the country, about the most pressing issues of the day culturally and politically? Talk about going out to the margins and getting "the smell of the sheep" on you.

Think of the incredible evangelism opportunity being missed here at events like this.

Many folks here are, of course, die-hard Protestants with their sola scriptura nonsense and so forth. But there is no shortage of men and women of goodwill. These are people, who, through no fault of their own, simply do not know the fullness of the truth and, at an event like this, how nation-changing, and country-transforming that fullness of truth can be. After all, it was the Catholic Church that built Western civilization. Yet, it's a fair bet that very few attendees know that history.

In the world of evangelizing, there is more than one way to "skin a cat." When you start with the hard fact that many Protestants also see the destruction of the nation, you have a jumping-off point because we have a shared reality.

So why is it that Protestants have built all this and Catholics are MIA? There's one simple reason, and, yes, it's the bishops. The U.S. hierarchy has never offered a solution to the destruction of the culture in the wake of the sexual revolution. Nothing. Practically all shut their mouths. Some quietly agreed with the revolt against God, and others actively participated in it.

Since the hierarchy controls the affairs of the Church, they recruited males into the seminary who were homosexual, males who had no desire to preach about morality and family values. In fact, they undermined them — many deliberately. And over the decades, they produced tens of millions of Catholic laymen who reject correct theology, which has had the trickle-down effect of warping minds politically.

In a case of what might have been, instead of opposing or ignoring these kinds of events, they spent billions of dollars (your dollars) on paying off homopredator sex abuse victims and attorneys — and they still are.

Checking with organizers, this weekend's event costs approximately a million dollars to host. Ticket sales offset that, of course, but, at the end of the day, it costs money and takes a lot of commitment to do. But everyone associated with it will tell you that when it's all done, it's well worth it. But some Catholic hierarchs have no desire to host these sorts of events, no stomach to talk and preach about patriotism, duty, honor and family. They are too busy protecting perverted priests like James Martin and "Msgr. Grindr," who lie about their love of the Great Reset.

As a result of all the social conditioning that has gone on in the parishes for decades at the hands of weak and homosexual men, the laity has been neutralized as any kind of impactful force — talk about the "Great Squandering." That's why there is no official Catholic presence at anything like this. The handful of Catholic media apostolates that possess the capability to cover this and even participate know the bishops would flip their miters if that happened.

Some quietly agreed with the revolt against God, and others actively participated in it.

In fairness, even in the Protestant world, Marxist pastors and the religious Left exert great influence, but the difference is that there is no centralized control or authority exercised over Protestant congregations. There is, in short, no Protestant version of a "hierarchy," so individual groups can do whatever they want. Theologically speaking, that's an absolute disaster. But culturally speaking, it has paid off in spades.

Because the Catholic hierarchy has become so corrupt, it has the effect of dampening any such effort among faithful Catholics. There is no support, help, aid, assistance or even kind word of encouragement from bishops for this type of thing. Heck, if a priest even wanted to put in his bulletin that parishioners should go and participate in something like this, then his gay bishop would sideline him faster than you could say "Joseph Stalin."

That's why it's the laity, just like all of us at Church Militant, who must realize all this and take up the charge from the Catholic perspective. We simply cannot cede this "reawakening movement" as though 2,000 years of truth have nothing to contribute. In reality, it should be Catholics leading this just like we did in the overturning of Roe.

But don't count on any help from the corrupt hierarchy. They've spent all your money on cases of homosexual sex abuse and cover-up. They have deceived you about the Faith, specifically the Church's beautiful social teaching, which they have corrupted and used as a weapon against America. They are caving in to and going along with the phony narrative of man-made climate change, profiting off of illegal immigration and supporting the abolition or massive curtailing of the Second Amendment.

When you look at that giant projection wall here at this convention, you see "The Great Awakening vs. The Great Reset." Faithful Catholics, as well as those who are only somewhat plugged, need to realize that the corrupt bishops have placed the Church on the wrong side of that battle. Catholics have a duty to fight against the Great Reset, even when their own bishops are over there.

Consider all this a further invitation to come to Detroit for our Church Militant Call to Action Convention at the end of August. 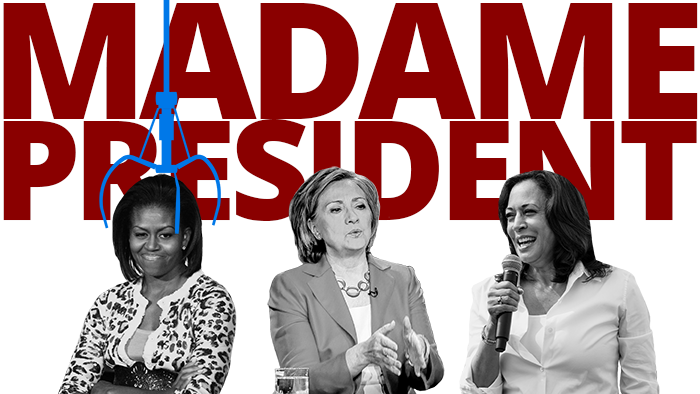 Madame President
Up next!