This is how it works.

When Archbishop Viganò released his first testimony last summer pointing at the rampant homosexuality and its acceptance by so many senior clergy in the hierarchy, he called it "a homosexual current." He meant by that a trend, a certain flow, a general direction, like a current in the ocean.

For that reason, we propose beginning to think of this as a beehive, a homosexual hive in the Church hierarchy where each member of the hive is involved in the same general work, but may not necessarily be directly connected to every other member of the hive — just like a beehive.

Every little bee is busy with his individual task, but through instinct, is engaged in the same type of work, with the same goal, even if there doesn't exist an actual working together directly.

They are each doing the same thing — as in the mission, which is to reinforce the hive and protect the queen, but in different ways, and again, not always in direct concert.

Such is the same with the homosexual hive in the Church hierarchy. Sometimes, you have activists trying to push the agenda directly. Other times, you have some bishops who give the whole thing cover.

Other times, there are extortionists and blackmailers among them who seek to hold on to power. Some are motivated simply by sex, others strictly by power, and still others who want some measure of luxury on other people's money.

Often times, these categories overlap, both in an individual homosexualist bishop and, other times, within the hive itself. There are different men, operating at different levels of motive, intelligence, cunning, skill, etc.

They don't all like each other. Often times, in fact, many of them despise each other personally — a common trait in the homosexual community at large.

Some of them live in a world of cognitive dissonance, presenting themselves as orthodox, and in some cases even actually being orthodox to a point. But at the same time, they are still part of the hive.

Even well-regarded religious communities like Opus Dei have bees from the homosexual hive in them, as recent press reports are now revealing. Others are open dissenters and are very clear about wanting to overturn Church teaching on this topic, as well as most other topics.

Then there are the middle-of-the-road bees who believe the Church is wrong on this, but are much more careful in how they go about making the case.

They don't directly attack the teaching; they simply allow groups or speakers or whatever who want the teaching destroyed to roam about their diocese and do their damage, maintaining a "safe" distance so as to not have it pinned to them.

Faithful Catholics and anyone looking at this horror needs to understand this is how the hive works. There are different bees with different tasks, different talents, different views on how to increase the hive.

As stated, often times, they don't agree or even like each other. But what they do have in common is this one thing: the preservation of the hive at all costs. The queen or, in this case, the goal must be protected — whatever needs to be done.

All of this has brought about a destruction of the religious orders, seminaries, young lives, vocations, parishes, catechesis, education, evangelization, consecration of bishops, liturgy, devotions.

There is not one corner of the Church which has not been swarmed by the homosexual hive and been corrupted. Until faithful Catholics begin to understand this — that there is a hive — and how it operates, this evil will continue.

Speaking naturally, the hive is in control. It has exercised operational control of the Church for decades, slowly growing the hive until it is so big that it would appear impossible to attack.

On a natural level, that's probably true. As long as there exist bees that will attack — and right now, there are many — it will be difficult to get at the actual hive itself.

It will have to be confronted — again, in the natural order — by faithful Catholics who will go after individual bees or small groups of bees.

Break out your can of Catholic Raid and start spraying. 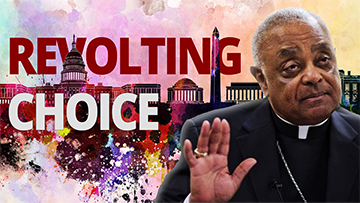 Revolting Choice
But a victory for the homosexual hive in the hierarchy.