Everything is riding on it.

If you didn't catch the NBC News online piece following up on the bishops' conference, well, you didn't miss anything. The reporter interviewed me at length — for close to 30 minutes — and at the end of the day, it was like I hadn't really been interviewed, at least not honestly.

The same was true, just not as blatantly, in an interview of Church Militant conducted by The Washington Post. Now, whenever we grant an interview to any secular organization, we know what will happen.

They will look for any quote and so forth that will help highlight their predetermined outcome for the story. There was a time when "news" outlets actually went in search of facts as opposed to arriving on your doorstep with a list of pretend facts and then jam your comments into their already-written story.

For example, we here at the apostolate have yet to see a story anywhere in the secular media — and there have been dozens — where at least one of the following adjectives does not precede our name in the story: alt-right, right-wing, far-right, extremist or ultra-conservative.

Whenever we get asked by secular media about the moniker "alt-right," for example, we always disagree and add that no one ever says what that term actually means. The reporter gives off a little chuckle, hangs up, writes his story and, you guessed it, labels us "alt-right."

Both encampments, the secular media and what we could call the Martin/Rosica/NCR camp, both spill gallons of ink damning Church Militant for being supposedly anti-gay and alt-right.

A quick check on any of Fr. James Martin's social media pages will reveal a non-stop diatribe of accusations against us as being alt-right and anti-gay or homophobic. Unsurprisingly, Martin is the secular media "go-to" guy in the Church whenever they need an interview with a "collar" aligning with their worldview.

In the inside language of the news industry, Martin is what reporters call a "media whore" — the reliable guy who would always give you the sound bite you needed.

See, reporters are notoriously lazy. They read each others' stories and then just rearrange a few of the paragraphs, change a couple of words here or there and produce a so-called "story" that is little else than something they wrote in large part before ever speaking to anyone they quote.

It's supposed to be the other way around, but that would require effort as well as a willingness to face the fact that their worldview — evident in their writing — might very well be wrong, and we all know that ain't going to happen.

The James Martins and the Thomas Rosicas of the world all feed at the same ideological trough as the secular media — because, well, those clerics are more secular than they are religious. They are constantly promoting secular ideas to the detriment of Catholic ones and lashing out and labeling Catholics who actually defend the Church.

In fact, the secular media consider these so-called media whores actual media darlings. They get their storylines from then, some of their vocabulary from them, wouldn't be surprised if they actually passed their stories to them for final editing and approval.

They certainly discuss them at length prior to writing. Why wouldn't they let them review them after being written? The Catholic Left, which isn't really Catholic at all, and the secular Left are really all the same thing, which is why they must collectively be challenged — their stories, their ideologies, their methods, all of it.

Case in point, I asked the NBC reporter why Martin shouldn't be questioned about his distortion of Catholic doctrine. I didn't ask the reporter if he agreed with Catholic doctrine personally, only if Martin should be questioned about his lack of integrity in claiming to be a representative of the Church on the one hand while undermining the same Church on the other.

I said point blank, it comes down to a matter of honesty and integrity. I've actually made that very point to a few reporters, and they each acknowledge the point, and yet every article that gets printed presents Martin as a credible source on all things Catholic without ever labeling him with the adjectives left-wing, alt-left, extremist, far-left or ultra-liberal.

That's simply dishonest, but also par for the course. Lazy liberal reporters with an agenda is never a good combination. It's why we here at Church Militant understand that the only way to combat this war of misinformation is to challenge everything that can be possibly challenged.

The Left understands, like all their rotten predecessors, that controlling the media is how you control the narrative. They used to act all above the fray and independent and objective, although they never were. But it was a good image. Remember Walter Cronkite, the most trusted man in America, as he was called? He was one of the biggest liberals you could find.

Church Militant is uniquely placed to fight against all this garbage in both the secular and ecclesiastical Left.

We "get" how this whole game works, and we think we play it pretty well. It's why we are launching an unprecedented Expansion Campaign, to position ourselves to expose the rot so dominant in the Church and supported by cultural elitists.

Ask yourself for example why so little secular coverage has happened in the case of Pope Francis and his involvement in the McCarrick case as well as multiple charges back in his native Argentina with regard to his covering up sexual predators in his clergy.

Rightly or wrongly, the secular media see Francis as an ally in their ideological battle and don't want to damage the brand any more than they might have to.

While James Martin is exhausting himself labeling us as homophobes and haters — no such thing as homophobia, by the way — why has he not said that Pope Francis is a homophobe for calling gay marriage demonic?

Church Militant needs your help to expose all this hypocrisy and underlying anti-Catholic agenda even more. This war is only going to get more intense, and it needs dedicated faithful Catholics willing to engage it full-time.

That means more work, more bodies, more space to put the bodies, more updates to the never-ending changes in the communications technology.

The Left — inside the Church as well as outside the Church — have been able to transform their respective arenas because they have controlled the narrative by controlling their media. This hegemony must be challenged and smashed. And that means by us, all of us, faithful Catholics who will no longer be complicit in any of it.

The time for sitting on the sidelines is over. If you care for the Church, if you love souls who are so threatened by all of this, we urge you in the strongest possible terms to step up and get involved.

Church Militant is looking at an all-out offensive against all of this by taking what we have done so well so far and radically improving every facet of what we do. None of this is rocket science — to once again use an overused phrase. It requires exactly what the luciferian media has put in — great effort, great resources and great work ethic.

Say what you want about their final product, but the luciferian media in the Church as well as outside the Church are relentless. They never stop, day in and day out, pounding the errant messages into people's heads. And we need to put forth at least that much effort.

Church Militant needs more bodies doing more work in more space with more technology, and we are imploring you to help us reach this goal. We are going to be talking all week about this effort — this Church Militant 2.0 endeavor — because it is sorely needed.

The secular ideology in the Church must be exposed, which means confronting the clergy who promote it, because, when all is said and done, it costs souls not to confront it.

This is why Church Militant is so down in the trenches and is planning for even more intense battles moving forward, because we know that Hell never rests in its fight for souls — and neither can we.

Please consider however you might be able to donate to help this effort. It will be a huge sum of money because we are planning for the long-term and the long haul — a new building, a new mobile app and a whole new plan for moving forward.

Please click on the button and donate whatever you can today or pledge a monthly donation, a pledge to support this important and vital work — work you have supported and helped bring to this point.

The time is now — the time to bring the battle for truth.

Please donate today to our Expansion Campaign and join us in the fight for information — truthful information. 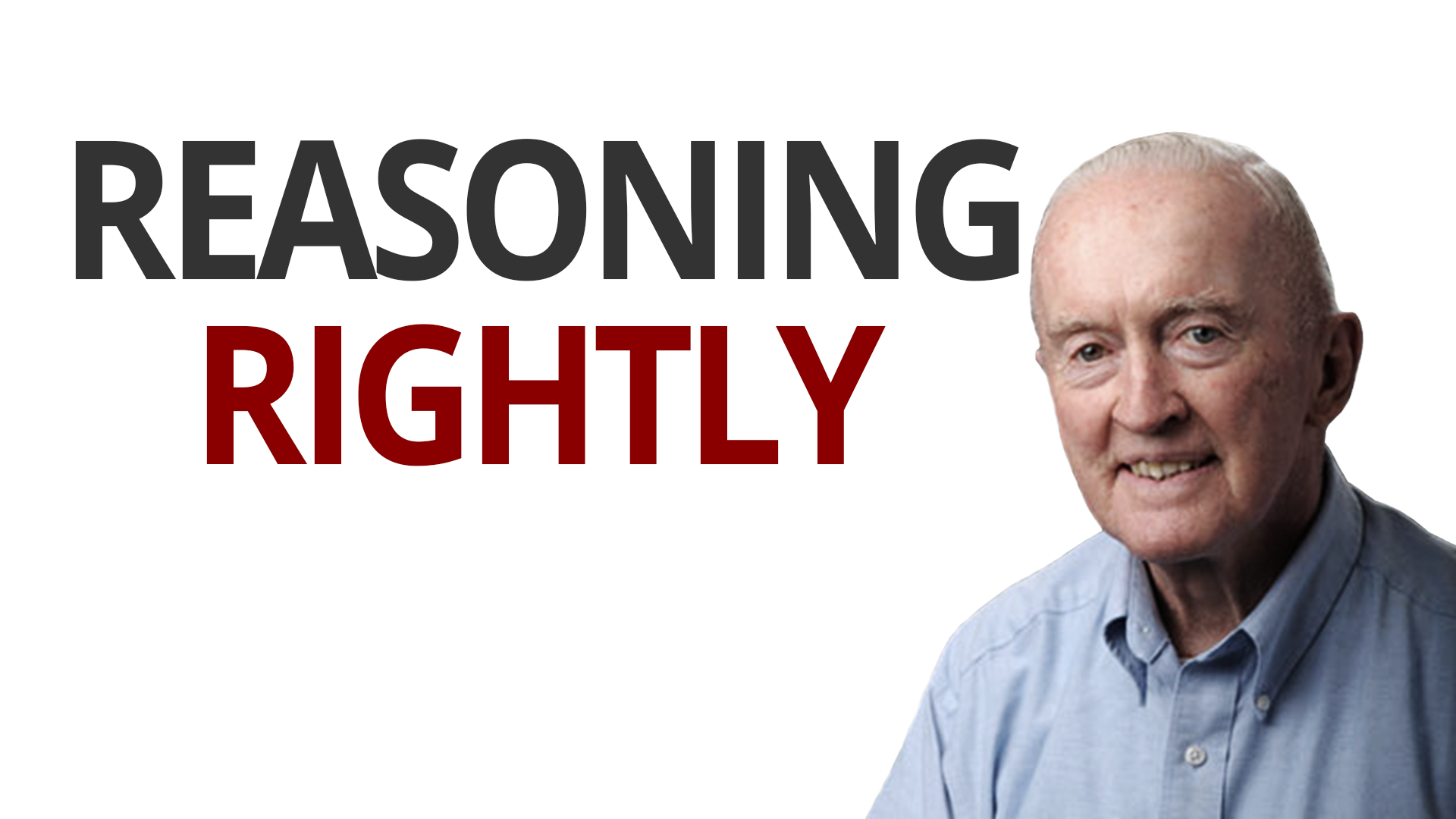 Reasoning Rightly
What the Church needs now is some right reason.