No one in America who really, deeply cares about the future of the United States misses the point that what people on both sides are actually voting on is the makeup of the U.S. Supreme Court.

For decades, and largely while political conservatives — including a hefty number of Catholics — were asleep at the switch, the Marxist Left was implementing a takeover of the country through judicial fiat. The Left resorted to the courts because they could not get done what they wanted through state legislatures. So, in an effort to usurp the will of the people, they populated the nation's elite law schools with social radicals, some of whom, after decades, were able to rise high in positions within the federal judiciary.

By the time political conservatives caught on to the plan, it was too late. The Left sufficiently controlled the courts, including the Supreme Court, to force its will on the people. Once something becomes legal, in people's minds, it tends to be more readily viewed as acceptable, even moral. Even formerly controversial issues take on an air of respectability, and opposition to them now becomes seen as narrow-mindedness.

But the composition of the High Court — the ages of various justices — brought the issue to a head in the 2016 presidential election. It was almost a certainty that the court could shift to the right, even marginally, if Trump was elected. So while the Left was alarmed, the Right was ecstatic at the possibility. After decades and decades of hard, grinding, thankless work, the possibility was coming into focus that Donald Trump in the White House might finally hand the brass ring to the cause of political conservatism.

This is the last chance to lock down a pro-life court. Pro-life voters will be overwhelmed by sheer numbers of the socialist-loving lefties by 2024.

And the issue was abortion. If Hillary were to win, it would be game over, potentially forever. And recall, during the 2016 race, there was already one vacancy on the court — the seat of Antonin Scalia — a conservative seat. Securing that seat with a liberal, as Obama had nominated in the person of Merrick Garland, would have been the death-knell.

Fast forward to 2020 and a rapidly aging, in-poor-health Ruth Bader Ginsburg, with one foot in the grave and the other on a banana peel. As one expert told Church Militant, "The old gal will last one year. She isn't going to last five." If Trump wins re-election it is virtually guaranteed that he will replace Ginsburg, one of the most Marxist-minded, pro-abortion, anti-God justices ever to sit on the bench.

But here's a question — something to consider: If the court tips from its current 5–4 to 6–3 conservative bent — or even possibly 7–2 — before Trump's second term is over, and then would overturn Roe v. Wade, what would happen?

Pondering that possibility, and even planning for it to some degree, the Left is arming itself and speaking openly of rebellion. It seems not that far-fetched that the same crowd that starts fires on college campuses when conservative speakers arrive and violently riots in the streets under the banner of Antifa would have little compunction about making blood run in those same streets if the Court toppled abortion. Current whispers of civil war might become louder than just whispers.

If that happens, if something like that — even on a somewhat limited scale — were to occur, it would, by definition, become a noble cause: the defense of innocent life.

There is not an honest man or woman walking who does not know that the Left supports child-murder. That is the central motivating issue around which all of American politics have evolved since the days of Ronald Reagan. That has been the central issue of the attempt to unseat Donald Trump for going on three years now, even up to the relative Marxist-media hype surrounding the coronavirus scare.

This is relative to what, you may ask? It's relative to the swine flu epidemic that went on for more than a year under Obama and killed thousands of Americans. Nothing was done by the media giants in that case like is being done now. They have seized on a serious issue and are perfectly happy to use it to try and destabilize Trump — they'll try anything to destabilize him — and it's all because abortion is always playing in the background.

Do not look to the U.S. bishops ... Too many of them are registered Democrats.

Abortion is and has been the topic that has been responsible for shaping the national debate for more than 40 years. It caused the bedlam surrounding the Brett Kavanaugh hearings — even the pounding on the doors of the High Court once he was confirmed. It was the admitted issue when New York Sen. Chuck Schumer hurled his invective and threats against both Justices Kavanaugh and Gorsuch — actually threatening them —for which he never apologized. The case he was talking about? Abortion.

But this is what pro-lifers need to note, and note hard: Given the rapidly changing demographics of the country — an essentially morally rudderless young population, opposed to religion and unfamiliar with natural law, this election is the last chance to secure and lock down a pro-life court. Pro-life voters will simply be overwhelmed by sheer numbers of the socialist-loving lefties by 2024.

In the midst of all this — with everything on the table — do not look to the U.S. bishops to make this point. Too many of them are registered Democrats themselves and do not possess supernatural faith. They are enamored with the Party of Death — even child-killers who are baptized Catholics they love schmoozing with.

The marriage between political conservatives and theologically orthodox Catholics has brought this moment to reality. It has been a gigantic, uphill struggle — a fight for the ages — and is now the last great clash over the future direction of the nation we will see in our lifetime. The Right has arrived at a point of equal footing, or at least as equal as it's ever going to get. The victory must be secured and it must be secured now, because the moment will never arrive again as long as any of us are breathing.

Pray, fast and act like you've never done before.

It is your solemn duty before the Lord of Life. 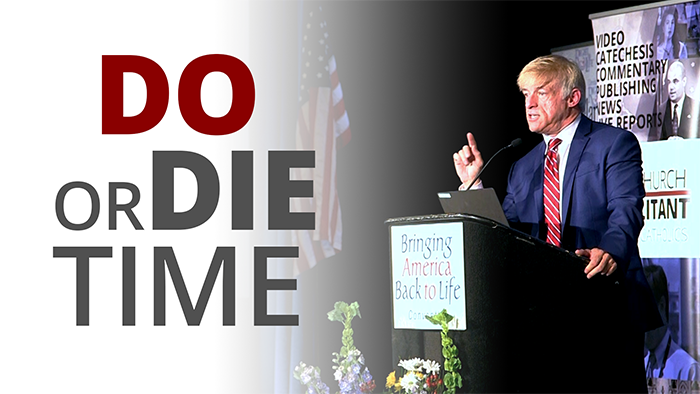 Do or Die Time
We must choose!