It's closer with each passing day.

As Christianity was being ripped apart in Europe in the 16th century by heretics who were fomenting the Protestant Revolt, Our Lady herself appeared in Mexico, and through her heavenly intercession brought millions of new Catholics into the Church.

What was lost in Europe was offset in the Americas. Estimates are that roughly nine million new Catholics came into the Church in the few years immediately following her appearance, setting the pattern for Central and South America to become almost exclusively Catholic for centuries to come.

Our Lady came to a Pachamama culture steeped in worship of false gods and human sacrifice — much like our culture today — including a culture promoted by many clerics, especially in Rome.

There was no dialogue; there was no accommodation; there was no compromise; there was no accompaniment with sinful circumstances. There was nothing but clarity: Give up your paganism and convert to the Catholic Church — and to provide proof of the divine command, the Queen of Heaven emblazoned Her heavenly image on the tilma of St. Juan Diego, signaling to a pagan culture that she was Queen, not Pachamama or any of the other false gods.

The Church has always been adamant in its call, a clarion call to the world: Repent and convert. Accept the gospel or perish.

This is Advent, and while many Catholics see this season as little else than a run-up to Christmas, the reality is it is actually a season to meditate on the Second Coming — the End of the World, the Last Day — when Jesus Christ will bring the curtain down on human history and assume His seat on the Judgment Throne.

It will be the General Judgment before all of humanity; every human being ever conceived will stand collectively before the Divine Judge and all will be shown the judgment of Heaven on humanity.

One of the reasons there will be a General Judgment is to ratify the truth of Jesus Christ as sovereign and to set the annals of human history straight before they are drawn to a close.

The last time humanity saw Jesus Christ, He was wrongly convicted and executed. That supreme injustice will be the first to be corrected. Caiaphas and Pontius Pilate will be standing there watching as Christ assumes the Judgment Seat, and His judgment will be final.

He was guilty of nothing, yet in the view of temporal history, He left this earth as a convicted criminal.

And while that was the worst injustice on the books, there are literally countless others that must also be corrected.

Archbishop Sheen, whose cause for sainthood, as you know, is once again being sabotaged by crooked prelates, said of the Last Day: "God has created another world to correct the injustices of this one."

But Holy Mother Church bids us to remember that the Last Day will be nothing more than the public ratification and announcement of the judgment each one of us will have received at our own private judgments at the moment of death.

Contrary to popular opinion — and the mindless ramblings of a multitude of bishops — we will each be judged by the King of Heaven at the moment of death.

While many Catholics and some Protestants fixate on the end of the world, we must never forget that each and every one of us will have an end to our individual world — death — and at that moment, every aspect of existence that we have known will crash to an end, never to be experienced again. This is the meaning of life. This is the meaning of our existence.

At that moment, not a single other thing will matter; they will all disappear. All that will matter is the state of our immortal soul —how it stands before God — saturated in sin or longing for Heaven.

And despite what false prophets like Bp. Robert Barron preach about the vast majority of humanity passing over this moment with ease, it is far from it.

Here at Church Militant, this Advent we are taking the first 15 minutes after lunch to do spiritual reading. We are doing this because the situation in the Church requires stepping back from the day-to-day and focusing on the final end.

Many of us are re-reading the very disturbing book The Four Last Things. Those four last things are Death, Judgment, Heaven and Hell. The Church has long called this collection by the Greek word eschaton.

Every single one of us is going to die and be judged, and then we will be escorted to salvation or damned to Hell, a final reality that the Church of Pachamama never wants to talk about.

Listen to this brief section from the book The Four Last Things about the state of the soul at the moment of judgment:

Now for the first time her eyes are opened, and she sees clearly what eternity is, what sin is, what virtue is, how infinite is the being of the Deity, and how wondrous is her own nature.

All this will appear so marvelous to her that she will be almost petrified with astonishment. After the first instant of wonder, she will be conducted before the tribunal of God, that she may give an account of all her actions, and the terror that will then seize upon the unhappy soul surpasses our powers of conception.

Next consider in what manner thy Holy Judge will receive thee, when thou appearest before Him not merely laden with a countless multitude of sins, but in a state of indescribable impurity.

Thou wilt stand before Him in the greatest confusion, not knowing which way to look. Beneath thy feet Hell lies; above thee is the angry countenance of thy Judge.

Beside thee, thou seest the demons who are there to accuse thee. In thy own interior thou beholdest all thy sins and misdeeds. It is impossible to hide thyself, and yet this exposure is intolerable.

Do people like Barron really think that this moment is a walk in the park — a time when all of our sins, a lifetime of millions of sins — must be accounted for?

Even for the just — those who will be judged as worthy of Heaven — even for them an account must be given.

God hates sin and so must we. It's why we say in the Act of Contrition, "I detest all my sins."

We know that there are countless numbers of human beings who depart this life not only not detesting their sins, but actually embracing and loving them.

Their private judgments will be the first moment of an eternity of horror; do not believe what that false prophet tells you. We have no reasonable hope that all men are saved. If we did, why did the Mother of God, the Queen of Heaven, come to the peoples of the Americas and convert them to the One True Faith?

Advent is a time for reflection on all this. Christmas is the time for gratitude that the Son of God came to provide us a way to be saved from all of this — damnation.

God's love is unconditional; salvation, however, is not. 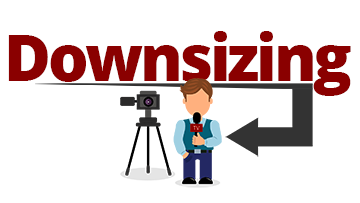 Downsizing
For once, some good news.