What can the laity do about the evil that has swamped the holy priesthood? A number of things actually.

First, prayer — absolutely, no doubt about it. A couple of days from now on the feast of the Assumption of Our Blessed Mother, a reminder first that ultimate victory belongs to Almighty God and His Holy Church, however small it may be at His Second Coming, a 54-day Rosary novena begins, initiated by the Holy League.

And the reason we say that is simple. What used to be only spoken of in whispers and by a few faithful Catholic sites — like Church Militant — is now on the lips and postings of every Catholic who is plugged in, and it is this: There is a dominant homosexual culture ruling the priesthood in the Church — from seminaries all the way up to the top. This wickedness has now been brought into the light.

And now, at least one bishop has publicly suggested as much — hopefully more will follow suit soon. So yes, we pray. But as good Catholics, we know that faith without works is dead. It is not enough in the face of this evil to retreat into piety because it's comfortable.

We must stick our necks out and challenge the evil, like the wimpy kid who finally, having been shoved around for too long by the playground bully, gets up off the ground and decks him — faith and works. So what work can we do?

Church Militant has composed a letter which we are suggesting you physically print out, personalize to your bishop and physically mail to him. You also need to send a copy to the Papal Nuncio — address is the one the link. Why the Nuncio? Because when he starts getting copies of the letter, he will start contacting various bishops and asking what the heck is going on, and that is a phone call no bishop wants. Even a liberal bishop hates that call.

The whole governing apparatus of the hierarchy is to never rock the boat, smooth over everything — keep the peace. This letter will definitely ensure no peace, and there shouldn't be peace in the face of this monstrous evil. There can only be true peace when it is eradicated.

So to the letter: It's 10 points, addressed specifically to your bishop, respectfully yet directly expressing what you want to see done. We won't go over all of them here — just a handful — but you'll get the point.

One, you want your bishop to issue a public statement saying the root of this problem absolutely is homosexuality in the ranks of the clergy — including the bishops. He needs to publicly announce whether he himself is homosexual or not — a public denial and refutation is the only way to be certain; closeted gays in the ranks of the bishops need to be dragged out into the light — that your bishop immediately bar any of his priests from public ministry who are gay, and they know who they are. If that means a whole restructuring of the diocese, then so be it. That's better than souls being damned as a result of being under the "leadership" of these clerics who teach perverted doctrine.

In order to achieve action on all this, the letter to your bishop says, until these — and the rest of the steps in the letter are undertaken publicly — you are immediately ceasing all donations to every diocesan collection and will be structuring your weekly offering to your parish in such a way as to make it difficult for the bishop to get his hands on any of it.

This filth in the ranks of first the bishops must be brought to an end.

Let them try to advance their wicked agenda with no money. Let them send homosexual seminarians and priests to Rome for study so they can come back with advanced degrees and be promoted up the ladder with no money. Our Blessed Lord set up a hierarchical Church. We don't get to rebel like Martin Luther, the heretic priest, did. But we do, as canon law specifically provides for, get to voice our concerns when we see things going wrong, and they are going wrong.

Now understand why it is necessary to respectfully demand your bishop publicly admit that homosexuality among the clergy is responsible for all this.

First, because it's the truth. Second because the homoheretics, like Wuerl and Cupich and Fr. Martin have already launched their "it's not a gay thing" campaign to conceal the evil and take people's attention off the real matter. Like Hell, and we do mean Hell, it's not a gay thing. It is absolutely a gay thing and these liars know it.

McCarrick wasn't raping women. Those who covered up for him were covering up for a homosexual predator. All the reports now pouring into the public by seminarians and priests are reports of homosexual assault.

And your bishop needs to stand up publicly and say this out loud so everyone knows exactly where he stands. And if your bishop, even if he's a "good" bishop, doesn't do this, then you need to hit pause on thinking he's a good bishop. Because given this moment, when the opportunity has finally arrived to begin to eradicate this evil, if he doesn't openly declare the truth, then something else is going on with him.

It's just that's simple. Yes, there is such a thing as black and white, and this #CatholicMeToo moment is one of those moments. There are homosexual predators among the ranks of the bishops a network, a web of the demonic that must now be ripped apart, and anyone who knows it must stand up and declare the truth.

If a bishop lets this moment go by and does not see it for what it is — a grace from Heaven — then he is blind, or a coward or a participant in it, any of which makes him unfit. If he can't join in the fight, then he needs to get out of the war. And if he won't do it of his own accord, then he needs to be encouraged by having his funding choked off.

Another thing that can be done is to join the Silence Stops Now Rally in Baltimore this coming November — see the link. Almost 1,000 faithful Catholics have already signed up in just a few days.

A great moment, unlike any other in the history of the Church in America, has arrived. Faithful Catholics, at last, have been given a rallying point, a focal point, to demand that the Church be brought back on course.

It will be a Hell of a fight because of how well-entrenched the Homo Mafia is in the operational structure of the Church. Remember, they've been busy at this evil for decades and decades and it isn't gonna change with just a single volley. They are hoping you get bored, distracted, lose interest. Saints never lose interest in the Church, they love the Church and will die for the Church if they have to.

What has been going on is the work of Satan, and you and I have been afforded a great grace to be able to confront him face-to-face and unite our souls to the heel of Our Blessed Mother and the Sword of St. Michael and deliver such a powerful blow to him so as to send him reeling back into Hell.

We need to seize the Church back from this evil. Good bishops need to join in this fight and call it out for what it is. Wicked, cowardly, perverted, political bishops need to be exposed and driven from the ranks and starved of funding until they are gone or at least rendered hamstrung by financial losses.

Print out two copies of the letter — read, pray, sign and mail to your bishop and the Papal Nuncio. And then, if it is at all possible, go onto the site and commit to going to Baltimore for the bishops' annual meeting where the Church Militant can publicly plead with the Church Triumphant to reverse this evil.

The moment has arrived.

Include a copy of your letter to the papal nuncio: 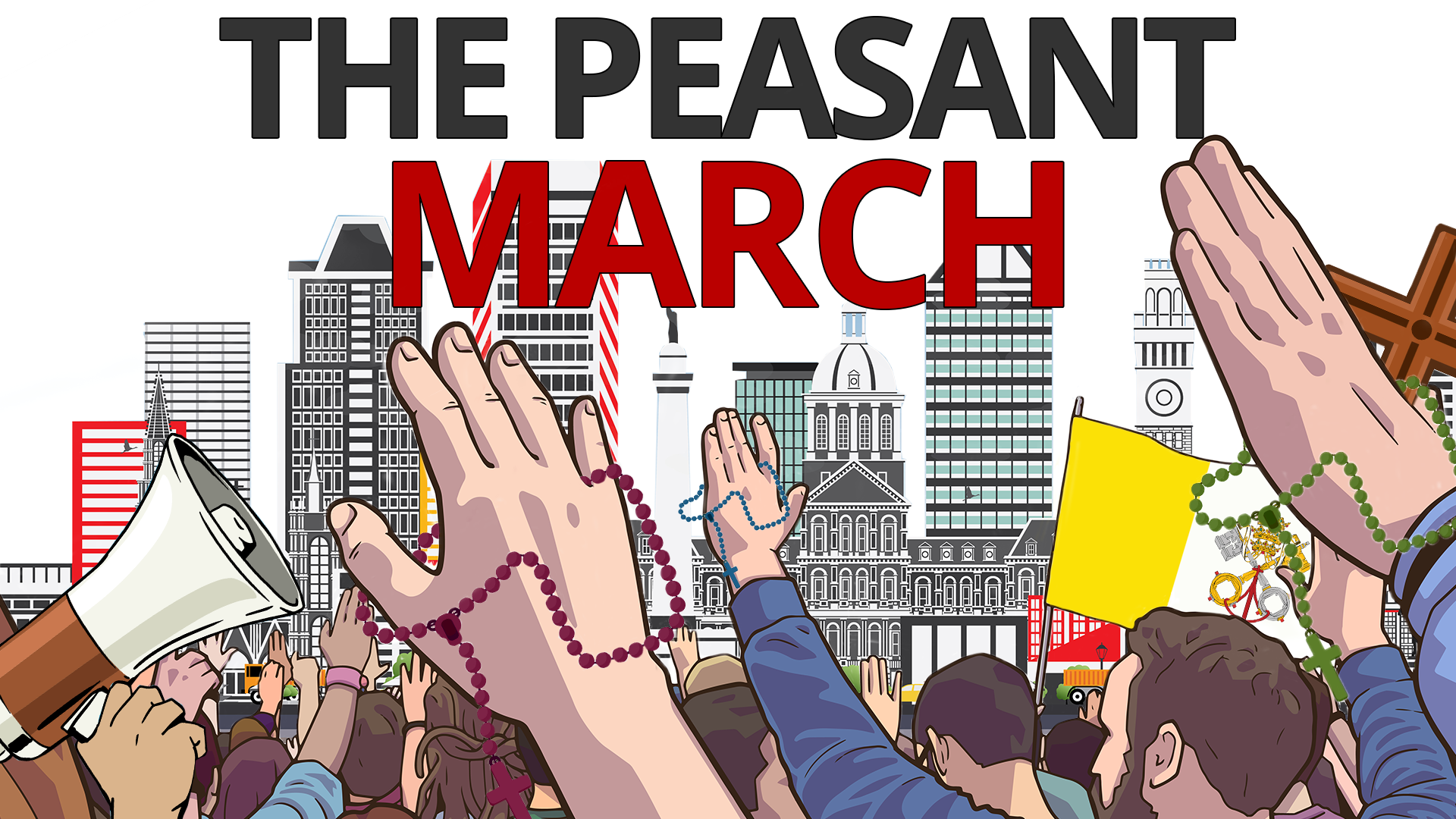 The Peasant March
Take back the Church.