The Lie Gets Bigger

Cardinal Collins — time to speak up.

Got to say, at this rate, Pinocchio ain't got nothing on the lying Fr. Thomas Rosica. As the saga continues to unfold, with the establishment Church circling the wagons for the dissident priest, they are all being more and more exposed for the phony Catholic crowd they are.

Now, thanks to the fine work of our good friends over at LifeSiteNews, we know not only did Rosica lie and steal for 30 years in the form of plagiarism, but now, he actually has lied for decades about having gotten a diploma, a degree.

On the website of Salt + Light, which he founded, Rosica says of himself in his official bio that he "holds advanced degrees in Theology and Sacred Scripture from Regis College in the Toronto School of Theology [1985], the Pontifical Biblical Institute in Rome [1991] and the École Biblique et Archéologique Française de Jérusalem [1994]."

Well, that's a lie, and a pretty big one. The university in Jerusalem is publicly saying that Rosica was never awarded an advanced degree. He attended, but never got a degree. But hey, what's a complete and total fabrication between friends, huh?

Rosica has been honored up and down the Church for his media work, his insight and erudition and so forth. And it's all been a fraud perpetrated on the Church by a lying, thieving priest supported by phony Catholics who want the Rosica Church pushed because it is opposed to authentic Catholicism.

Earlier this week, we revealed that the main financial backer of his little viewed cable TV outfit is the Gagliano family of Toronto, the same family which also publishes various magazines celebrating abortion, euthanasia and homosexuality — which of course, completely aligns with lying Rosica.

This latest bombshell, that not only is he a serial plagiarist but actually lied about having gotten an advanced degree needs to spell the end of this man's public life.

The Knights of Columbus in Canada, the Gagliano family in Toronto, the Canadian Catholic Bishops' Conference — all of whom financially support Rosica's work — are now completely complicit in his sin and illegalities if they continue to support him and don't denounce him for what he is, a self-admitted plagiarizer and now completely busted liar.

Frankly, at this rate, the entire question of him claiming to be a priest has to be called into question.

He has stood up and received award after award, given lecture after lecture, written volumes of material, hosted cablecast after cablecast, run dozens of Vatican press conferences — and all of it based on the lie that he has advanced degrees in Scripture and theology.

Cardinal Collins in Toronto — shout out to you — just how long are you going let this fraud continue without saying something publicly? When are you going to make a public petition to your fellow Canadian bishops to stop giving him a couple hundred thousand dollars a year?

When are you going to pick up the phone and call the Gagliano family at St. Joseph's Communications and suggest they stop giving him $400,000 a year?

The man is a proven liar, and as long as he is not denounced, he still enjoys the pleasure of appearing to speak on behalf of the Church. You, Your Eminence, need to make a public declaration that Rosica should no longer be considered an authoritative voice for anything Catholic.

And while you're at it, would you mind checking the record and make sure that he isn't lying about being ordained as well. 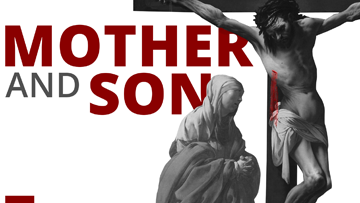 Mother and Son
Bear the full weight of the sorrow.