A million battles. A hundred years.

This might be a dose of reality a little frustrating to hear, but it is a needed reality check.

There is no silver bullet solution to this crisis — not the Latin Mass, not Gregorian chant, not fixing catechesis, not fixing the seminaries.

The reality is all of these — and many, many more — battles must be waged to even begin to make a dent in this nightmare of a crisis. There are a million little battles to be fought, decades of rolling back what is essentially the Freemason-inspired modernist heresy which has seized control. This is, in plain flat terms, a hundred years' war.

Anyone who is serious needs to be ready for the long haul, a big reality check.

The well has been so poisoned there is no quick fix. It will be a hundred years' war of attrition — last man standing.

The Church of Nice is imploding; a demographic reality check is swelling just over the horizon.

It's like standing on the beach on a nice, sunny, beautiful day, and what the eye cannot see, but weather satellites do see, is a Category 5 monster storm forming beyond the horizon.

The enemies of the Faith, fighting against the Church from within, are busy bringing to birth what is essentially a "new Church," as Abp. Viganò refers to it as.

They have been successful beyond their wildest dreams of nearly completely demolishing the Church, prepping the way, greasing the skids for a cheap facsimile of Christ's mystical body, dedicated to ushering in a one-world religion in support of a one-world government.

Christ's enemies in robes, like Judas did, care nothing about the next world and care only about the kingdom of man.

And they have been waging war for 100 years to arrive at this point. They have engaged in millions of battles, all over the Church, missing not one little nook or cranny in parishes, diocesan religious ed programs, liturgy, devotionals, music, architecture, colleges, hospitals, nothing, not one single place in the Church, has been left un-attacked.

Any faithful Catholic who thinks this maelstrom can be rolled back by just the Latin Mass or just getting a good bishop in place is beyond naive.

This battlefield is immense; there are thousands of foxholes on it, and each one needs to be fought over.

In the foxhole of Catholic media used to help sound the alarms and inspire folks to action — spiritual and temporal — we hear at Church Militant have chosen to plant our flag.

Our current expansion project, a major overhaul of our physical plant, is on schedule to be done in another few weeks, at which point we will be coming back online with all electronic media guns blazing.

When we take the wraps off this project, Church Militant will be nothing less than the most sophisticated media outfit in the Catholic world.

That's what all this building and hammering and so forth is all about: prepping the ground, literally and figuratively, to secure this foxhole on the battlefield.

Exposure, intellect, relentless pursuit — these elements are king in the information world, and Church Militant is massively dedicated to this cause, as the last 10 years of investigative reporting has proven.

When the rest of the Catholic establishment were mocking us, we kept pursuing what we knew was the truth because of what enormous numbers of sources were telling us and showing us.

So here we are, on the brink of an all-out war, summoning the troops, so to speak.

This past weekend, at our talk in Crookston, Minnesota, I asked the audience a question I ask at many talks to drive home the point of the depth of the crisis.

I asked for a show of hands if they knew at least five very close friends or family members who are baptized Catholics and who have left the Faith.

Roughly 300 attendees, almost every single hand went up. And that scene is repeated every single time I ask the question, and I have asked that question of hundreds of audiences.

Just the simple stat that 70% of Catholics don't believe in the Real Presence should be enough of a warning, yet the enemies of Christ in robes continue to talk about immigration and fake man-made climate change.

So grab your Rosaries and your courage which you were given by the Holy Spirit at your confirmation and get into this war.

Your soul and the souls of those you love are what's at stake. And no, none of us will be alive to see the restoration.

The evil is too far gone for this to be solved in our lifetimes. But just as Christ's enemies plotted for decades, so too must we plan and lay the groundwork for those who come after us to achieve the final conquest.

In the meantime, if we play our cards correctly, we will see the Church Militant come roaring back and wage war against the serpent.

We will be watching from ringside seats in the Church Triumphant. 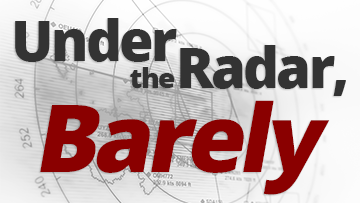 Under the Radar, Barely
Hiding in plain sight.