The Lord Placed It on My Heart

If there is one overarching aspect to the Catholic Church in the United States today, it is that the delicate balance between faith and reason, that wonderful relationship by which man's soul and intellect combine, has tipped too far to the faith side, abandoning reason or perhaps better stated has become blind faith fueled by emotionalism. For example, it is somewhat common these days to hear reasonably orthodox Catholics use expressions like, "The Lord placed it on my heart ..." or "The Holy Spirit told me ..." Ridiculous.

This is not to discount inspiration, but it is to say that the immediate, knee-jerk response to any thought or feeling coming to someone has become unhinged. It's the religious-minded equivalent of blaming every bad action on the diabolical with the catch phrase "the devil made me do it." Atheists have nice thoughts on occasion and are even motivated to do some moral good like giving a beggar a buck, but that does not mean the motivation for the act came from the Holy Spirit or the hackneyed excuse, "The Lord placed it on my heart."

A little further investigation reveals that phrases like this have a long history of use in some Protestant circles where it's all about a "personal relationship with your Lord and Savior Jesus Christ." So the view dominates that any "good" thought was communicated to the person directly by God with no mediation. This is, of course, the touchstone of Protestantism — an individuality that ascribes everything about "theology" to the person and whatever motivation or inspiration has come personally to them from God. Small wonder then that there are 40,000 Protestant denominations and counting.

What the whole ecumenism movement has caused is not a coming to acceptance by Protestants of those Catholic things, which they reject, but rather a downplaying by Catholics of those divinely revealed truths. Too often, clergy and laity are overly gun shy about just stating Catholic truth and having a good old-fashioned throw down about it. For goodness' sake, get some guts guys. Protestants never seem to be concerned about hurting our feelings or offending us when they say the Real Presence isn't real or Mary gets too much emphasis and so forth. It never enters their minds that they should tread softly when ripping out Bible verses to "prove" the Church is wrong about this or that.

And yet Catholics, too many, go immediately into pantywaist mode and try to find the gingerly way of addressing the falsehood, as though turning into a wimp or doormat is meritorious and following Christ's example of meekness. It is not. It is capitulation, sacrificing the Truth for your own good. Too many Catholics don't want to come off as forceful, so they begin downshifting. That's not how you win converts. It's how you get steamrolled.

Part of this psychology, this protestantized psychology, is evident in the vocabulary so many Catholics use today — the music at Mass and the outward gestures — all decidedly Protestant with a little coating of Catholicism. Catholic identity has been offered up with no concurrent offering by Protestantism. Catholics who still practice the Faith in any meaningful way, less than 20 percent of total U.S. Catholics, look and sound decidedly more Protestant than their counterparts look and sound Catholic. In virtually every area — theology, liturgy, music, devotional life and so forth — much has been cast overboard by Catholics with nothing of substance to show in exchange. Which brings us back to this point about "The Lord placed it on my heart ..." or "The Holy Spirit told me ..."  Those are decidedly Protestant phrases, underlying a Protestant approach to relationship with God.

First of all, even use of the term "the Lord," as opposed to the more Catholic "Our Lord," rings of Protestantism. Recall, Catholicism offers intimacy with Our Lord; Protestantism offers a personal relationship with "the Lord." All relationships are personal, involving persons, but intimacy is reserved for those persons who are special.

Having a personal relationship with Satan is for almost all human beings a sad reality of our fallen nature. But we would never want to claim we have intimacy with the Father of Lies, although it would appear that many do. Herein lies the distinction, an essential distinction, between a mere personal relationship and one of intimacy of the Protestant error and Catholic truth.

That intimacy with Our Lord can only be found in the Catholic Church. It's even why we use the intimate term "our" as opposed to the more sterile "the" as in "the Lord." Both are true. One is better because it is intimate. Intimacy with God never presumes as in "The Lord placed it on my heart ..." How precisely do you know that, not feel it, but know it? You just made a claim, asserting a fact and therefore factually-based evidence must be brought forward. For truly, Martin Luther claimed the horrors he unleashed on Christianity were inspired of God, as did all the Protestant revolutionaries. How do you know?

This almost gnostic expression of "knowing" what God has said, done or willed, outside of public Divine Revelation is extremely prideful, no matter how well-intentioned or innocently delusional, and as such, it is a perfect door in for the diabolical.

Be Catholic and grow in intimacy, not relationship. 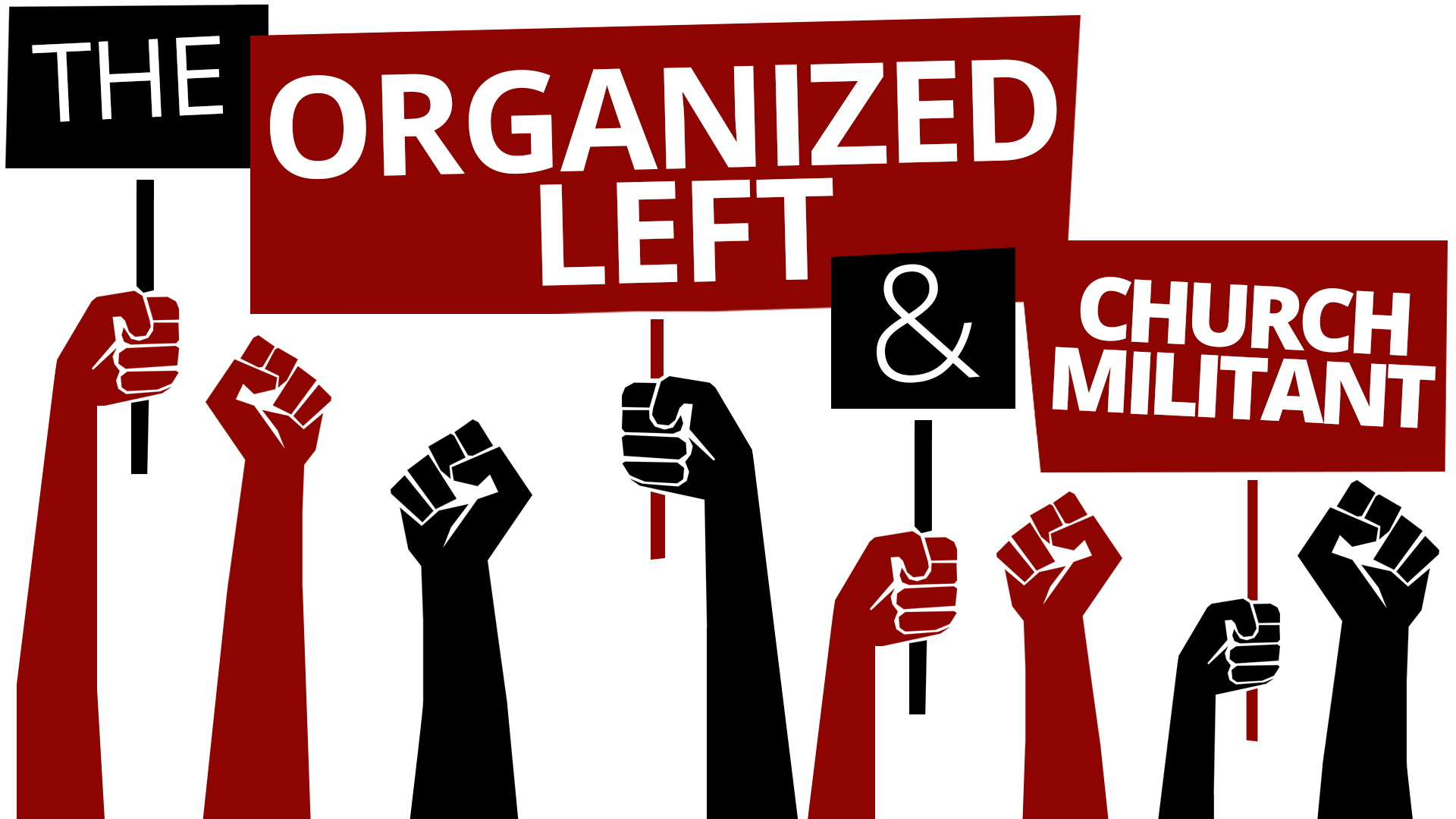 The Organized Left and Church Militant
They must not like us very much.