The relationship between the Church and politics is undeniable — so much so, in fact, that they are almost mirror images of each other. And considering fallen human nature, the enormous sums of money, the intrigue, the lies and anything else that could apply, no one could be surprised.

About a month ago, a perfect example of all this unfolded very nicely in Orlando, Florida, as well as Washington, D.C. — all on the same weekend. The so-called conservative movement, such as it is, subdivided into three separate gatherings, each occurring on the same weekend.

In D.C., the anti-Trump Republicans gathered to plot how to wrest the party back from the control of Trump. Good luck with that. Nonetheless, the intrepid bunch with headliners like Liz Cheney and Adam Kinzinger gathered and plotted, likely in vain.

At this point, the best they can probably hope for is to derail Trump just enough to pull the party back from what they see as its impending doom. Of the three gatherings, this was the least attended (about 400 people), a signal that not only do they have their work cut out for them, but they will also have to accept their role as mere saboteurs and begin what amounts to being behind enemy lines, at least philosophically.

The D.C. GOP hates Trump. They have forfeited their seat at the table.

While they do share common ground on various policy points, the difference between them when it comes to moral points is as wide as the gulf is between authentic Catholicism and "Church of Nice" Catholicism. So the conservative movement within the GOP is truly fractured.

The D.C. GOP crowd hates Trump, and they seem to have not realized they have forfeited any seat at the table when it comes to discussions of the future of the party and the overall movement.

That crowd is more akin to what used to be called "moderate Democrats."

These Liz Cheneys and Adam Kinzingers voted to impeach Trump, push the insane Jan. 6 narrative and so forth. They long ago gave up on conservatism and the Republican establishment. In the considerably more populated areas of the so-called conservative world, the authentic conservative and the establishment conservative are where the real struggle for the heart and soul of the movement is happening.

In Orlando last month, this couldn't have been any more clear than watching the duel play out between CPAC and AFPAC. CPAC is the large, well-funded establishment political action committee and AFPAC, which stands for America First Political Action Committee, is where all the youthful (read: future) energy is. Whoever wins this struggle will dictate the future of the party and, to a large extent, the nation.

The same dynamic is easily found in the Church between authentic Catholics and social Catholics, between those who really do believe all the Church teaches and those who attend and hang out for other reasons.

What is the establishment, other than that accepted by most people?

So as in the political world, so too in the Catholic world — a spectrum or continuum of theological adherence where only one part of that spectrum is the safe, authentic place to be. Establishment Catholicism mirrors establishment conservatism, in that each achieved the status of "establishment" precisely by compromising because, let's face it, the vast majority of humanity compromises and does so routinely.

What is the establishment, after all, other than that which is accepted by most people? The Church of Nice and political conservatism are mirrors of one another, comprised of grifters at the top and mindless sheep for members that are being led astray and willing to be led astray because they seek comfort before greatness — a condition of fallen human nature.

Both will go over the cliff — they are engineered that way. They can't help it. A compromised set of beliefs in either theology or politics will lead to destruction.

It's why the Left has been so successful — because they never compromise, they just keep pushing, unwilling to settle for just being comfortable. Each generation or two, in both Church and culture, there are some who rise up in response to the compromise and resist it. They are lambasted, roasted, mocked, attacked and, in the end, they are proven right.

Sometimes, historical events unfold in such a way that they actually win and a culture is preserved, even if temporarily. But win or lose, they are always proven right. Down deep, even the compromising sheep know the resisters, the fighters, those willing to sacrifice comfort for greatness, are right.

That's why movies like Lord of the Rings and Gladiator and others of that genre are always so successful — because they speak to that dynamic in the human soul, the desire for justice and right. But alas, too few are willing to do much about it, retiring to their homes after popcorn and a nice day at the movies, stirred in their souls, but not sufficiently.

They are easy prey for the grifters at the top of the Church or conservatism who speak to that yearning but compromise it for personal gain in whatever form they take it.

Yes, the hierarchy is comprised of consummate politicians, and the politically conservative world continues to pay just lip service to God — perfect mirrors of each other. 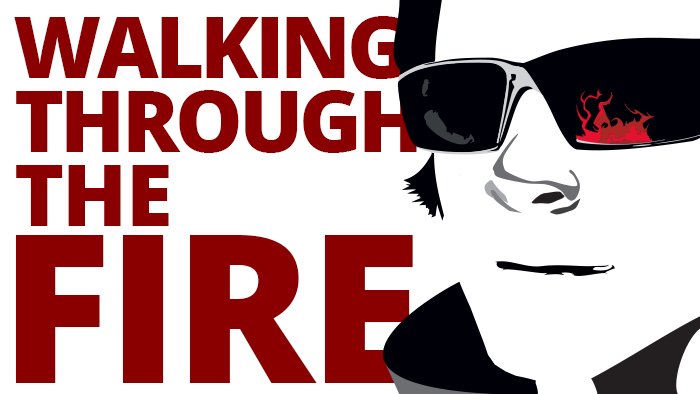 Walking Through the Fire
Heart and soul.