Same as it always was.

If you haven't seen the quiet explosion on social media attacking theologically orthodox and politically conservative Catholic outfits, then you should know about it.

Earlier this week, the giant fake Christian liberal organization Sojourners added its emasculated social justice voice to the attacking brigade. And naturally, Church Militant was one of the targets, along with other fine Catholics like Taylor Marshall and Tim Gordon.

Presenting the thinly veiled assault as an investigative-type piece delving into the dark secret world of who we all follow on Twitter, the author reached the astonishing conclusion that theologically orthodox, politically conservative Catholics — wait for it, wait for it — actually have the gall to follow each other on Twitter and often retweet each other's posts.

Wow! What an incredible revelation. This reporting will bring down the entire faithful Catholic Twitterati — not!

First, the idea that people of like mind follow each other is a no-brainer. It happens on the Left as well — all the time.

CNN and MSNBC and all the rest of the Luciferian media must sit up late every night tweeting and retweeting each other's posts.

Church Militant just thought that's not much of a story because everybody already knows it. Who cares?

But last week, the National Catholic Reporter, which was banned from using the name Catholic almost 50 years ago, produced its own multi-part series, also attacking the same orthodox, conservative Catholic crowd.

The reports tried to suggest that outfits like Church Militant and others are somehow bought and paid for shills for Trump and the GOP.

First of all, that's stupid because it's demonstrably wrong. We have criticized Trump and the Republican establishment multiple times for his and its surrender to the gay agenda.

We just happen to be extremely supportive of his policies which advance the protection of children's lives in the womb. He is, hands-down, the most pro-life president in the history of the country in terms of abortion — period.

So, shocker, we support him in that regard.

We don't talk much about his economic policy — only very infrequently and tangentially — but heck, are you better off than you were four years ago? Most Americans say yes.

We also align with the Trump administration on the question of national security and protecting the border because, frankly, his policy more closely resembles Catholic teaching than what a group of aging bishops who grew up in the hippy culture, many of whom are homosexual, say.

In fact, that bunch of hippy, gay, Democrat bishops deceive Catholics about teaching on immigration — and we might as well throw in climate change as well.

But all of this "in the weeds" stuff, while important, does give us the opportunity to speak to the larger question of what is the role of "Catholic media."

Well first, on the large scale question, what is the role of any media, specifically information media. The answer is obvious: to present the truth.

So when we then segregate out "Catholic" media, the role is to present the truth of the Catholic faith.

And here's where things get wonky these days. You really have to think of the world of Catholic media as sub-divided into three, or maybe even four different groups.

There is first the Catholic establishment media, who do an OK job presenting the truths of the Faith but fall down miserably when reporting on the current crisis because they have a dog in the fight — and that dog is they can in no way draw down the ire of the bishops on themselves because they are dependent on the bishops for their livelihoods.

Directly or indirectly, they owe their salaries and budgets to remaining in the good graces of the mitered class. So, in short, they are compromised.

The next camp in the Catholic media world are the liberal Catholics who have an agenda of pushing a different conception of Catholicism than what the Church Herself teaches, but they dress it up in Catholic-sounding vocabulary.

If the Catholic establishment media is compromised, this crowd is downright deceptive.

Then you have the ever-growing Catholic media outlets who are completely faithful to Church teaching and expose problems in the Church and the world where Catholic teaching is opposed, ridiculed or ignored.

And, of course, Church Militant is in this last group, along with many other fine allies like LifeSite and Taylor and Tim and so forth.

And here's a point to bear in mind: The very fact that all of us are now coming under fire means we are scoring points.

Any Catholic information media that compromises or deceives is a sham. They are neither Catholic in a meaningful sense, informative or, for that, much of a medium — aside from preventing the fullness of the truth to be heard.

There is very little daylight in fact between them and the Luciferian media of the secular world, because they all have a problem with truth.

The goal of Catholic information media is to transmit the truth of the Faith — period. That is in service to the larger goal of bringing as many souls as possible into the Church so that they may be saved.

That said, the business of evangelizing faces a two-headed monster these days, and authentic Catholic media must tackle both heads of the beast because each is damaging the Church's mission to evangelize.

The first head is the secular culture, and this is encountered in a million different ways — unjust laws, wicked politicians, the breakdown of the family, general immorality; you name it, we all see it every day.

But the second head is one that is relatively new to those who would proclaim the glory of Holy Mother Church, and that is the traitors to Christ within the Church — and not just traitors in general, but the preponderance of them.

Authentic Catholic media must respond in a way to this that is essentially brand new territory. The degree of evil present in the Church is astounding.

If there was ever a time there was this much corruption so widespread over so many aspects of the life of the Church where so many baptized Catholics have apostatized, it's hard to think of it.

Catholic media cannot just concentrate on issues of the secular world, which are important, but it must also be willing to confront head-on the corruption and treachery present in the hierarchy and the clergy.

Thankfully, Heaven has provided the means, the weapons, to wage this war of truth, which is always the war, just played out differently in our day.

So, what's the mission? The same as it's always been: service to the truth for the salvation of souls. The only thing that has changed is the strategy, and the strategy has to change because the circumstances have changed.

Every age presents a new challenge to Holy Mother Church, and Her loyal sons, in cooperation with the grace afforded, find a way to combat the threat, and through that same grace, overcome it.

The difference is just this battle appears to be the most vicious, intense and exhausting of them all.

Glory be to God. We all were chosen by Almighty God, created to be in this time and space to fight this battle.

The particular foxhole on this gigantic battlefield we find ourselves in just happens to be the foxhole of the media.

Come join us. It's frightening and exhilarating — all at the same time. Just keep your head down and pay attention to the incoming. 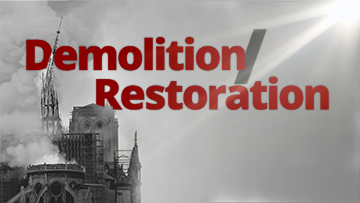 Demolition/Restoration
An HQ for the counter-revolution.