It never changes — but sometimes the method does.

The mission of this apostolate — St. Michael's Media/Church Militant — is singular: to be used to save souls — period. That mission plays out in the day-to-day in a number of different ways.

The corruption in the Church — doctrinal, liturgical, sexual and financial — must by necessity continue to be exposed for the simple reason that it cripples the Church — both the clergy and the laity — in the mission of the Church, which is to bring souls to Christ.

One of the ways the corrupters in the Church have been so remarkably successful is to speak in ambiguous terms where what they say can be understood a hundred different ways depending on who is hearing it.

That's intentional — you can sound like you are Catholic, but in reality, you are far from the heart of the Church.

Truth is always clear, meant to be understood, to be apprehended, by the mind, the intellect. Clarity is the currency that truth traffics in.

As the rot and filth, all the corruption continues to be exposed, it poses deep challenges in bringing it to light.

For example, long-time followers of Church Militant will notice that a good deal of time and attention, our resources, have been dedicated to uncovering the corruption and exposing it. Let us first say, this was not a part of our original mission here, not seen as even necessary to it because, frankly, we didn't know it existed beyond just a collection of just individual bad prudential judgments.

But as the years have progressed, we have learned. We have learned that this is exactly what is being exposed, as we said yesterday, a worldwide, organized criminal syndicate, the goal of which is to destabilize the Church and represent the Faith in such a way as to suck out all vestiges of divine revelation.

It all goes hand in hand, these areas of rot: doctrinal, liturgical, sexual and financial.

For the going on 14 years the apostolate has been around, we have moved through what you might call a "progression of awareness."

In our first few years, we concentrated entirely on the doctrinal rot because that's all we were aware of, frankly. So we produced our flagship show, The One True Faith, to help people come to the realization that for the past 50 years they haven't really been taught authentic Catholicism.

The reality came very clear very quickly, that if you are a baptized Catholic under roughly 60 years old, you were — with occasional exceptions, of course — not really taught the Faith.

So our programming then was largely concentrated in that arena. And it is still just as relevant today — actually more so than when we first produced it back in the 2006–2008 timeframe.

Then we began to see the intimate connection between the loss of faith with the destruction of the liturgy that had taken place, the parallel watering down of catechesis with the liturgy.

So in this period, our programming began focusing on this aspect, and we started producing our longer form investigative pieces, our FBIs — Faith-Based Investigations — where we dove headlong into these crucial discussions.

After that, a great illumination began to come to us, all of this that was going on, the meltdown of the Faith — the Church established by the Son of God personally, outside of which there is no salvation — was actually an orchestrated effort.

The entire body of the Faith had been deliberately distorted and twisted and represented, re-offered to Catholics and the world.

But what was being represented was not Catholic. It was the working of spiritually sick and demented men and women who had no love for Christ and who had seized control of vast areas of the Church.

Many of these individuals had become corrupt because of lust — sexual lust — and lust for power, often times both, for they are often found hand in hand.

Their lust became the fuel in their engines for distorting the Church, disfiguring Her. Lust, especially sexual lust, a failure to control the passions, is the main cause for the damnation of souls, and it's why so much of humanity will be damned.

In the Church, within the clergy specifically, a special lust seized hold — homosexual lust which has played itself out in the most spiritually, psychologically and physically damaging ways imaginable.

It is the driving reason law enforcement agencies are raiding chanceries all over the nation today.

All of this became very clear to us on a trip to Rome in 2011 with a series of private discussions and multiple headlines. In very short order, we began reporting on this manifest evil and haven't looked back.

We were pilloried in the early years we were exposing all this — pilloried and attacked by people in the Church. Events, however, have unfolded to cause others to also see what we saw and join forces.

So here we are, years later, having dedicated a sizable portion of our resources to uncovering all this, because as long as this evil — the filth, rot and corruption continues to hold sway — souls are being lost because the truth is obscured.

When covering all this from a journalistic standpoint, there are challenges that do not exist in the secular world for uncovering corruption.

Put succinctly, there are avenues in the secular world for getting at the truth that simply do not exist within the Church.

While certainly not perfect, and requiring a kind of doggedness on the part of reporters, the truth can be discovered because of one factor in the secular world which is totally absent in the Church: accountability.

There is no accountability in the Church for evil men. As long as the person above them is also corrupt — a practicing homosexual, an enemy of Christ, a malformer, a spiritual terrorist — then they are safe.

In the world of secular journalism, a reporter can demand certain government documents: it's called a Freedom of Information Act — a FOIA.

There are open trials where much is discoverable through court records. Campaigns have to report financial dealings as well as politicians.

There are a hundred legitimate ways to get at truth in the secular world if you are determined, but not so in the Church. A series of arcane procedures and laws and practices that can never be challenged or changed except, ultimately, by a sitting pontiff, prevent access to truth.

A climate of secrecy develops, and wicked men use this as a perfect cover. And if you challenge them, then they ignore you, or attack you, but they never come clean.

So this necessitates, for the reporter, a different way of getting at the truth. Methods that would not usually fly in the secular world now become the only means available to get at the truth and ultimately uncover the evil.

So very few people are ever able to be named because they will be retaliated against. Semi-private conversations which point to destabilizing efforts to uncover the truth must be revealed without the sources again ever being named.

Documents or recordings that were never intended to be seen or heard beyond the immediate parties are now spirited out and gone over.

Emails from people with encrypted accounts, secret meetings, discussions far away from interested ears — all of this now becomes the routine because there is no transparency. That lack of transparency is directly attributable to the lack of accountability. All of this, taken together, is how the mission must now be fulfilled.

Too many Church leaders today, frankly, are liars and cannot be trusted, and a person would be a fool given all that has been revealed to simply take a given leader at his word.

As the federal and state investigations continue to expand and media reports to continue to expose and more and more people within the Church come to realize that they need to come forward and spill the beans — ala Viganò — the truth will come out; which means that those who have a vested interest in keeping the truth from coming out will go their graves stepping up their efforts to cover it up.

If you would have told us 14 years ago that all of this is what we would be talking about today, we would have had you committed.

Yet here we are, fighting un-Catholic presentations like we have a reasonable hope that all men are saved, Holy Communion received in the hand is hunky dory and the whopper: homosexuality is a gift from God and we must treasure it.

We say all this now, as what has proven to be a watershed year begins to end, to say that nothing has changed here in our mission.

The Holy Catholic Church was established by the Incarnate Eternal Logos for the salvation of souls, and outside of it, there is no salvation; that for those who know this and refuse to enter it, there is no hope of salvation; that there are evil and wicked men in high levels in the Church who have dedicated their despicable lives to the prevention of people ever hearing this.

And that the number one duty of every single faithful son of the Church is to fight this corruption with every fiber of your being in what has proven to be unconventional ways. 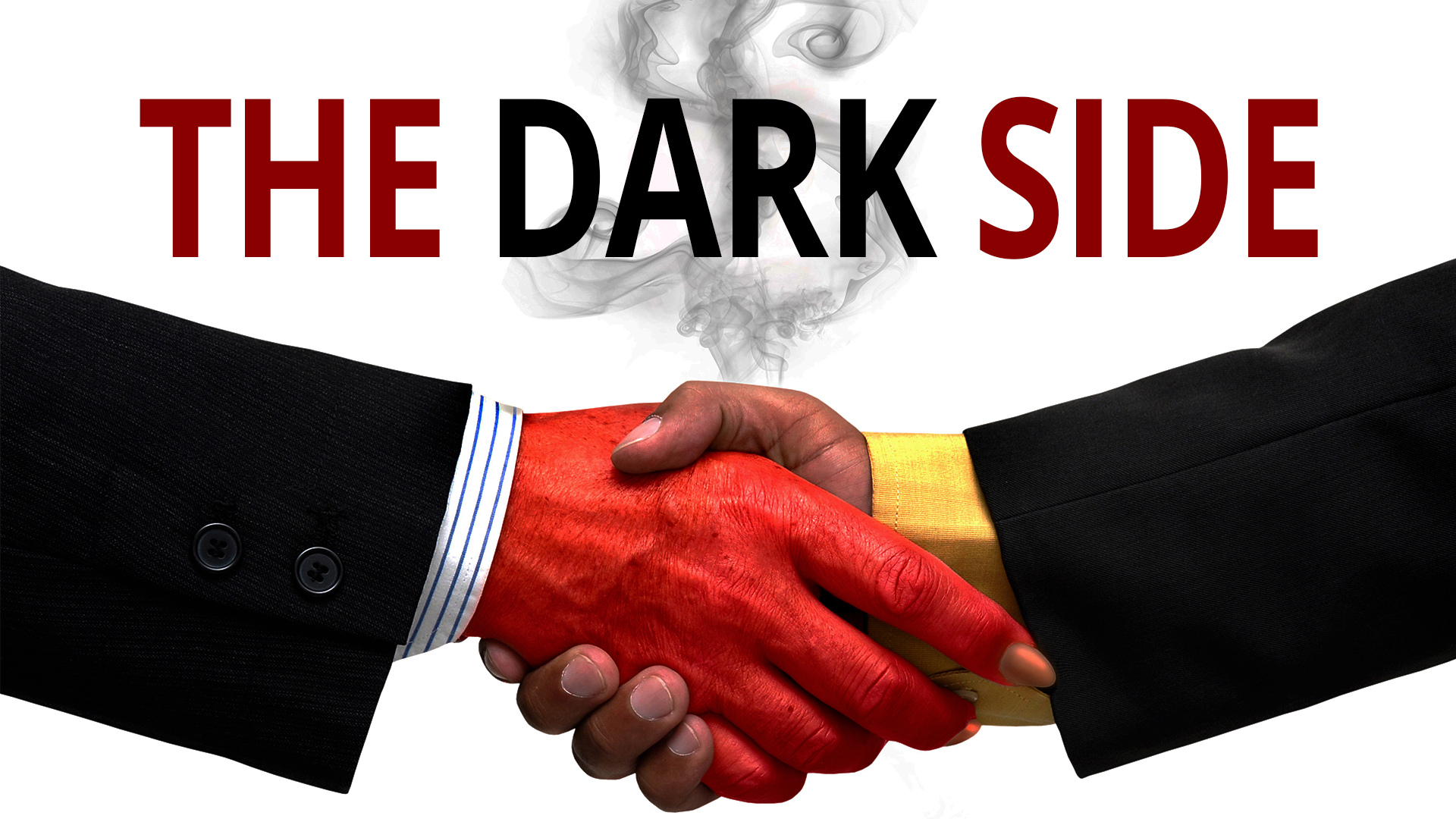 The Dark Side
Darkened by the smoke of Satan.