Sometimes, one moment reveals everything.

Some of you may have heard me relate the following before, but given the times, it bears repeating, and for the record, which will become clear, I was an eyewitness to this.

I attended freshman year of high school, the second semester anyway, in San Francisco's Sacred Heart school. The year was 1976, so the country's bicentennial happened while we were living in the City by the Bay.

We had an apartment directly across the street from St. Mary's Cathedral, the temple to modernism that looks like a washing machine agitator — horribly ugly, surpassed only by the ugliness of Cdl. Mahony's Los Angeles monstrosity.

Anyway, the celebration of the country's 200th birthday was occasioned by a noon Mass at the cathedral, where Abp. Fulton Sheen was the guest homilist. I was one of the lead altar boys at the cathedral and served at the Mass. I got to hear Sheen preach about faith and patriotism.

I heard him with my own ears, sitting barely 10 feet behind him. His words were so powerful, so moving, so touching that I used them a few years later in a story I did on July 4 when I was a reporter in Cheyenne, Wyoming.

But it would not be those words that would make the lasting mark in my memory — what I think of as "the Sheen moment." In fact, most in attendance that day at the bicentennial Mass did not hear what I heard. A few did; including my father, who stood in the doorway to the sacristy.

I got to hear Sheen preach about faith and patriotism.

A small group of admirers and well-wishers had come back to the sacristy after Mass, and of course, being one of the altar boys (mercifully, before there were "girl altar boys"), I was right there.

Sheen was teasing us about the incense, wanting to know which of us was the pyromaniac who had the giant cathedral filled with smoke. For the record, it was me.

It was in the middle of that playful back-and-forth that a man, I would guess in his mid to late 30s, with a ponytail and tweed jacket, came into the sacristy through the second door opposite where the small crowd had gathered.

He walked toward Bp. Sheen and said, "Bp. Sheen, I came back from the Far East and wrote a book combining Catholicism and those religions." He had the book in his hand, slightly up in the air.

Sheen had by this point turned around and was facing him, and before the man could utter another word, Sheen yelled at the top of his lungs, totally on fire, "Get out! Get out! The Catholic faith is a gift from Almighty God, and I will not have you polluting it. Get out!"

The hippie stopped dead in his tracks, lowered the book, turned around and slinked out. Sheen's voice thundered all over the massive cathedral. You could hear the echo even inside the sacristy.

I was an eyewitness to this. My father was, as well. It was jolting, even frightening. The passion, the fire, the love of truth so intense that it erupted from him, exploded from his soul. Everything stopped: Time, people, even the air seemed to leave the room.

And then the 80-year-old archbishop turned back around to us three altar boys, as though not a thing had happened, and simply said, "Now, who was using the incense?"

His eyes were like a loving grandfather's, as though the previous moment had not happened at all. I will admit, I was a little nervous, as that 15-year-old altar boy, to say it was me. But he was perfectly calm and loving.

Where is that passion today from the shepherds? Where is that intensity — that love of Almighty God and His order and truth and beauty?

We get a lot of grief from some quarters about saying things about the bishops and their evil silence. To those people, I would say, You had not the advantage, the blessing I did, of seeing how an actual shepherd responds when the sheep are threatened. You have been conditioned through the multiplicity of their sins of silence and weakness and cowardice to accept their namby-pamby, emasculated approach to letting the sheep be torn apart and steamrolled by the demonic Culture of Death.

I saw that moment with my own two eyes, heard it with my own ears. Seared into my memory, as if it happened moments ago. It was like the voice of God erupting in the Temple, chasing out the moneychangers with a whip fashioned by His own hands, tearing their flesh from them for their desecration of the holy: "My Father's House is a house of prayer, but you have turned it into a den of thieves."

This studio is named in honor of that giant of a bishop: the Fulton J. Sheen Studio.

The U.S. bishops are gathered at their annual conclave in Baltimore this week to elect yet another hapless leader from among their hapless ranks.

Where is that passion today from the shepherds?

So let's think for a moment, shall we, of these two worlds colliding, meeting in some special place somewhere out there in the universe where time has melted away: the bishops meeting this week in Baltimore and the sacristy of St. Mary's Cathedral in San Francisco immediately after Mass on the bicentennial.

What would these two "worlds" of bishops think of the other? The USCCB would vote to have Sheen shipped off to St. Luke's "crazy house for clergy" to undergo anger management for "lack of charity."

Sheen would declare them cowards — the first of those named twice in Sacred Scripture on the list of the damned — and demand they each resign their office so as to be preserved from eternal fire.

So Church Militant has made a choice when we behold the current state of the Church brought to you by homosexual and cowardly men abusing their office of bishop. Our choice is emblazoned on the wall of this studio, and as long as we are here, it will remain.

"The moment" happened in 1976, but its fiery, revealing brilliance is kept very much alive, every day right here in this studio.

Venerable Bp. Sheen, pray for us — and we'll keep the incense burning. 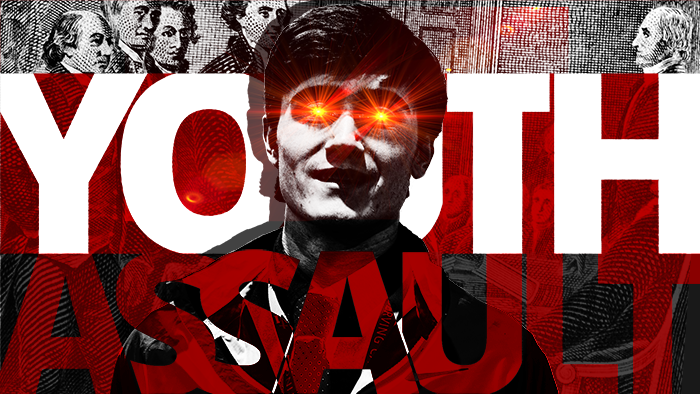