There is no doubt about it, this is the most important midterm election the country has ever faced because the country is so polarized that is will begin to trend in one direction or the other.

The entire crew has been busting it these past days and weeks getting ready for our coverage tonight of this crucial election. And we've been jamming precisely because it is so crucial. We've completely reconfigured the studio for tonight's coverage and jammed the entire staff in here because there is so much to follow.

As many of you know, I've been in news and covering politics my entire life, and I have never seen anything like this. As of this morning — the day of the election itself — this close to it all being over, all the pre-election polls and pundits can't seem to agree on anything.

In race after race, the predictions are wild swings of as much as 10 points with either party projected to win. All of this matters because politics is a reflection of morality, no matter what the liberals say about you can't legislate morality, that is exactly what politics is all about.

So what's at stake is what kind of moral nation America is or wants to be.

To undo morality has been the goal of political liberals for decades, and they have scored major victories in the process and continue to do so.

But the moral law written in every human heart by God cannot easily be discarded, so what they have created over the years is a substitute morality so people can feel good about themselves even while they are living evil lives.

So smoking and eating meat and wearing fur have become the mortal sins of culture that has accepted sodomy as marriage, abortion as normal and contraception with a hook-up culture as the status quo.

And we see this in the Church as well, translated into a slate of lesser evils being advanced to replace intrinsic evils.

Leading Churchmen ignore those other evils, for which people go to Hell, and talk nonstop about climate change, illegal immigration and gun control under the guise of being moral this joining forces with the political Left.

This is why we here at Church Militant are always pointing to the marriage between the theological Left and the political Left, because they have the same goal: the undoing of the moral fiber to bring about a new world order.

Every bit of this is related — politics and theology — and is why we dedicate so much of our resources here around elections to covering it all so in-depth.

As you know, Church Militant will be live tonight starting at 7 p.m. ET, bringing you expert coverage and analysis of the vote through a Catholic lens and we invite you to join us for that.

We have been busy preparing for this for quite some time as we said with loads of preparation here at Church Militant because — yes — the fate of a nation could hang in the balance.

Abortion, funding Planned Parenthood, sodomy as marriage, what your children will be taught in schools, how your livelihoods will be impacted, a socialist view of the world which the Church has flat out condemned — all of it, every bit of it, is tied together.

It's how this nation functions — the vote.

We have a moral duty to vote and be involved in the political process because of what's at stake. So we pray, as we will be doing today live in one final Rosary for the good of the nation which you are invited to join us for at 1:30 p.m.

Please join us. No one brings you better Catholic analysis and discussion on all of this than Church Militant.

During the 2016 presidential election, thousands and thousands of you tuned in and watched that, many staying around for the whole nine-hour marathon.

That election has set the stage for what is unfolding now, so we invite tens of thousands of you to join us live tonight — again, 7 p.m. ET. 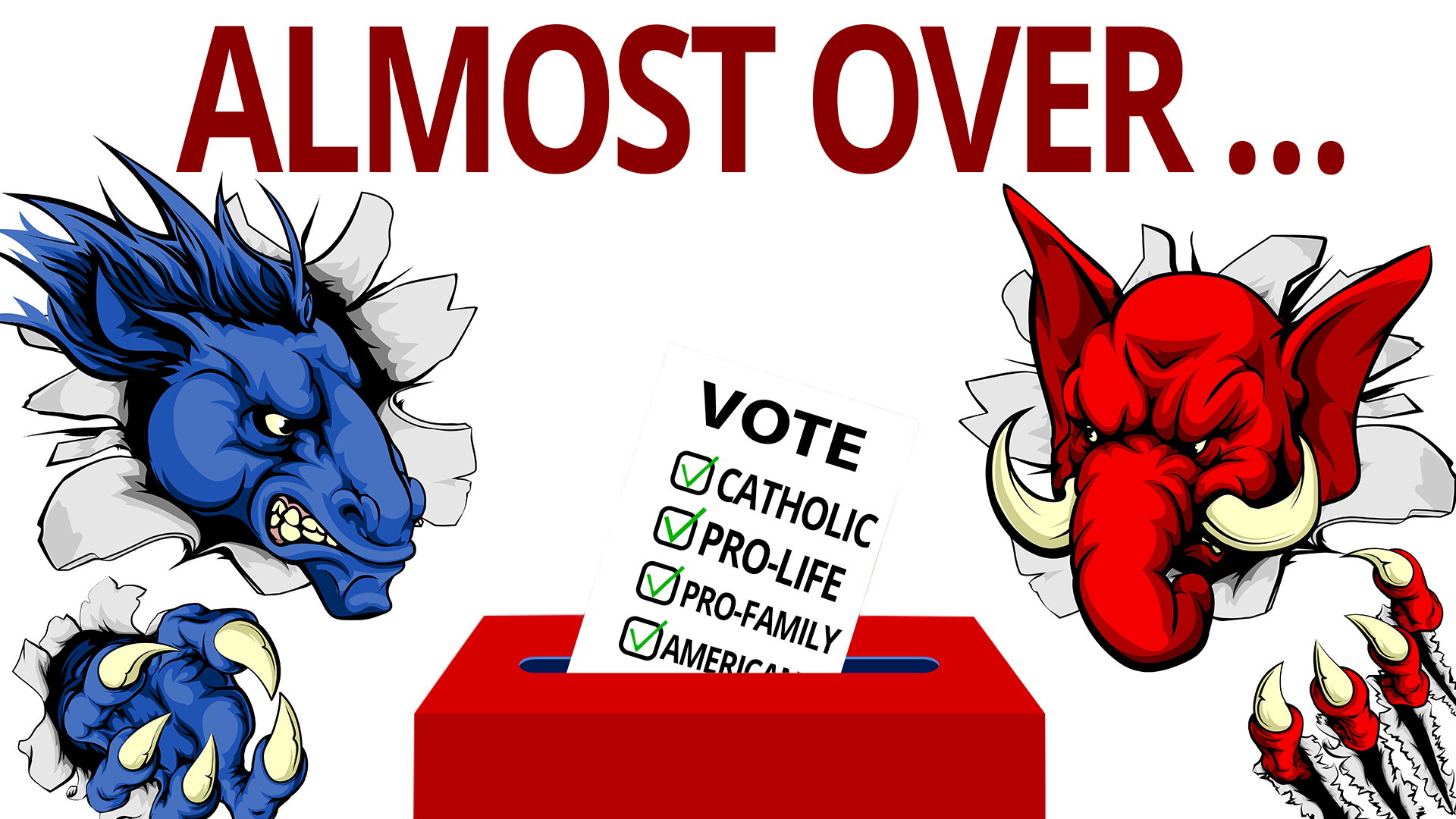 Almost Over…
One more day to go.