THE Mother of All Meetings

Lots of pre-synod posturing in Rome these days, where nearly every enemy of the Church and their allies have descended.

On Monday this week, homosexualist cheerleader James Martin had a private 30-minute audience with Pope Francis where, according to his tweet, it was just him and the Pope, one on one, with no one else but a translator present.

What a disgusting sight — truly.

Consider the underlying reality of this picture, a priest who advocates, routinely, for changing Church teaching on homosexuality sitting with the successor of St. Peter; the same successor of St. Peter who will not grant an audience to his own cardinals who signed the dubia letter pleading with him for clarification on Church doctrine.

In fact, Francis has put them off for so long that two of the original four have actually died. Talk about waiting out the opposition.

Martin has romped up and down the Church promoting sodomy, pretending he never challenges the teaching.

In truth, he spews the lies that God willfully made, intentionally created, men and women to be homosexual or lesbian.

And going further, he announces to gay Catholics, "God created you with special gifts and then called you into the church for a reason."

Of course, none of this is that different from some of what Francis himself has said, which is why this meeting, while disgusting, can hardly come as a shock. Just as the unveiling of a statue in St. Peter's Square, the first such statue in 400 years, could hardly be a shock.

It is an homage to what can be termed, the theology of globalism.

The statue depicts 140 migrants, matching the same number of saint statues on Bernini's famous Colonnade. But that's about where the comparison ends.

While Bernini's statues depict many who gave up their lives for the true faith, this work depicts a political cause dressed up as religious.

The statue of fake spirituality will remain in St. Peter's Square for a week and then be moved to the Vatican Gardens by order of Pope Francis.

Hopefully, some future pope will have it melted down and the bronze used to create a statue dedicated to the billion children murdered by abortion that no one here in the Vatican seems to care about.

It is supremely ironic that while Pope Francis scolds nations that care about their sovereignty by attempting to secure their borders, that he himself lives ensconced behind some of the most famous and largest walls in the world and is protected by one of the most elite security details in the world, armed to the teeth.

No one is saying the Vatican should tear down its walls, or hand over its guns. We live in an evil world where weapons and walls are necessary.

It's just that the Pope shouldn't be telling other countries to do so because, well, it's more than a little hypocritical.

Likewise, there was another symbolic dynamic involving this immigration statue, and as far as we can tell, it went by completely unnoticed.

But the Pope chose to essentially ignore that glorious Catholic feast and instead focus attention on the celebration of the World Day of Migrants and Refugees.

And so it goes and will continue to go with this papacy, downplaying or ignoring virtually everything Catholic he can, while lifting up every worldly, even Marxist, globalist issue he can to near liturgical or doctrinal levels.

Consider, a meeting with Martin while ignoring his cardinals; showcasing a statue of largely non-Catholics, diverting attention away from Catholic martyrs; focusing on World Day of Migrants and Refugees while downplaying the Catholic feast of the protector of the Church.

The meeting between "Evil Jimmy" and Francis is symbolic of looming disaster in the Church.

What people need to understand is all of these things — all of this — is all part and parcel of the same thing, the plan to remake the Church.

It is a plan to use the Church to advance the Left's globalist agenda and all of these are pieces of that puzzle, the normalization of homosexuality, immigration policy, the downplaying and even persecution of tradition.

That's what's going on with the disastrous Theodore McCarrick-engineered plan for Catholics in China that Francis signed on to.

And that's the goal of next week's Amazon Synod: to sacramentalize the ecological movement; to raise to nearly supernatural heights Mother Nature — not for its own sake but for the sake of gaining even more strength and power for globalists.

Globalists don't care about the earth or creation or religion. If they did, they wouldn't push for the murder of a billion children — and counting.

What they do care about is using the issue to convince democratic people that their governments need to abandon their national sovereignty in a common effort to "save the earth."

The Church is useful in this regard because like Evil Jimmy distorts the teaching on the love of God for all people, these Churchmen distort the Church's teaching on the required care of creation.

Both issues, rooted in authentic morality, are twisted into a theology of globalism where a false morality is asserted — a feel-good morality. Not a shred of this is Catholic.

Loving your neighbor does not mean abandoning your borders. And respecting the dignity of each person does not mean accepting their perverted sexual practices.

But in modernist Rome, these are the brass ring wicked men have been striving for, for decades.

The faithful must decry these evils, for that is what they are.

But we will not sit back silently while Church teaching is twisted in such a manner to supplant truth with falsehoods; to replace Catholicism with humanism — no way!

Coming to you from Rome. 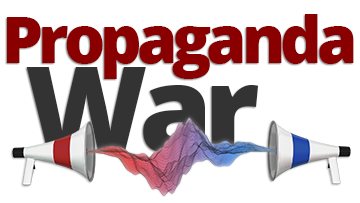 Propaganda War
It's in full swing.