The ‘Nice’ Bees in the Hive

And they can become dangerous.

As the issue of homosexuality comes more and more to the forefront of so much that is wrong with Church leadership, there are a number of nuances that need to be known as well as correctly understood.

First off, just because a bishop or a religious community is orthodox doesn't mean that they aren't members of the hive. Too often, faithful Catholics simply see gay clerics as liberal and liberal clerics as gay or gay-friendly.

While the second part of that is more true than not, the first part is not. Not all gay clerics are liberal, not by a longshot. There is an acronym in Church circles, D.O.T.

It stands for Daughters of Trent and refers specifically to homosexual men in the priesthood and episcopate who give all the appearances of orthodoxy, may in fact even be orthodox on a wide range of issues — that's the "Trent" part — but are still homosexual — that's the "Daughters" part.

Recall that when all this madness overwhelmed the Church back in the 1960s, virtually every bishop was, or at least had the reputation of being, orthodox. No one would have breathed a word about out loud, for example, about New York Cardinal Spellman being an active homosexual.

Nor would they have considered even privately suggesting that Detroit Cardinal John Dearden was favorably disposed to homosexuality, certainly among his seminarians like the future Bp. John Nienstedt.

What appears on the surface in the world of orthodoxy should never — especially as the information now gets more out there — never be given a pass.

It's insane, but orthodoxy — real or pretended — is absolutely no guarantee that a priest or bishop is not homosexual.

These are the "nice" bees in the homosexual hive. Whether they are chaste or not, whether they are pretending to be orthodox or really are, except on this issue, it cannot be taken for granted that these men are simply "good" bishops.

I have been told to my face by a bishop that many faithful Catholics respect that he personally knows a number of gay bishops and that they are all orthodox.

My thought is: so what? How do you know that? And how do you know they won’t, at some point down the road, go off the rails? There is a deficiency, probably not their personal fault, probably, that exists within them.

Understanding oneself as "homosexually oriented" immediately presents the difficulty that you now see yourself, and the world, through that lens.

They simply cannot go through life day to day, seeing themselves "that way" and not struggling with it. And that includes not even acting on it — we're talking about the chaste ones.

For example, how has it come to pass that the bishop I spoke with who revealed this to me, how does he know? Obvious answer: because the gay bishops revealed it.

And so the question arises: Why would a homosexual man who has been consecrated a bishop feel the need to reveal that about himself to other bishops? The answer, again, is obvious: because the internal pain, conflict, struggle has to come out, in some way.

They simply cannot keep it bottled up. They have a deep, dark, secret identity crisis, and they have to reveal it somehow. And it is that somehow where things potentially become explosive. What happens in the case where an "orthodox" gay bishop needs to deal with his secret, internal conflict even more?

Does he appoint handsome young priests in his chancery or seminary staff who are otherwise completely incompetent, but because he finds them physically irresistible, they get a pass?

This stuff happens every day, and again, it is the faithful who ultimately pay — the faithful and the Faith itself.

They are walking kegs of dynamite and should not remain in their consecrated roles. If they truly believe and accept the Faith, for the good of the Faith, they should step down.

As long as they have not been involved in sins of this nature, they have no reason whatsoever to announce their reason. That is their own private affair. But too many of them rationalize that they are chaste and, therefore, all is good. And since they are orthodox in a Church in desperate need of orthodox bishops, then that makes it imperative for them to remain in office.

That's wrong. There should not be homosexual men in the ranks of the ordained. Even the chaste ones would be liable to blackmail or coercion — especially the chaste ones. Even nice bees can become dangerous given the right circumstances.

There absolutely exists a homoclericalism in the Church, and it extends way beyond just liberal and active homosexual bishops. It all has to end. 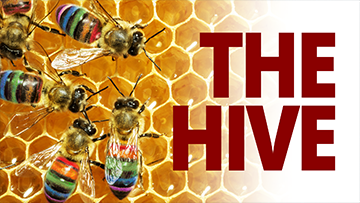 The Hive
This is how it works.