Start chopping off the tentacles.

When Abp. Viganò released his explosive testimony last month — and has now gone into hiding for fear of his life — he rightly described the homosexual network in the Church as a giant octopus with tentacles everywhere strangling the life out of the Church.

His exact words were that the homosexual networks "act under the concealment of secrecy and lies with the power of octopus tentacles, and strangle innocent victims and priestly vocations, and are strangling the entire Church."

Tentacles is a good word for the archbishop to have used because it righty describes a multi-dimensional aspect to this horror.

One major area of all this has been the way young men are recruited and handled by various dioceses in the United States – in many cases a homosexual culture can often dominate and in some cases be threatening to actual vocations.

In order to appreciate the tentacle that reaches into various US dioceses and then onto seminary life, it's necessary to understand the various forms it can take.

The homosexual culture within a diocese — that is, the clergy that act as a mafia in protecting each other and then promoting the right "gay" man to the seminary can exhibit itself in many forms.

One, it can be, for instance, where some seminarians themselves are active with each other — apart from any knowledge or encouragement from their sponsoring diocese.

Two, It can be where a climate of gay-friendliness is fostered by the diocesan vocations director along with other diocesan clergy, including a bishop, one may have a discernment or formation in his diocese.

Three, it can be found in some faculty or staff of the seminary thereby giving a kind of tacit approval to a gay subculture. This environment can be very detrimental to non-gay seminarians, especially when an obvious gayness comes to dominate the formation house; or four, a combination of the first three points or all of the above.

This is the danger for example when a homosexualist priest like Thomas Rosica, a frequent speaker in many U.S. dioceses and seminaries, or James Martin showing up and giving talks to diocesan priests and seminarians at various "Catholic" institutions.

They don't have to directly encourage any particular activity, they simply undermine traditional Catholicism in subtle little ways in their talks, which, of course, helps contribute to a mindset of so-called "gay-friendliness." They should not be permitted around young minds.

Then, there is yet another example where any one person involved in the formation process of young men called to orders are themselves actively gay and engage in sexual activity with some of the seminarians who, for the most part, are willing participants.

Then there are the cases where some priests actually try to coerce non-gay seminarians they find attractive and want to enlist in their ranks. These seminarians are straight-up victims, frequently of physical abuse and assault, not to mention the spiritual abuse, confusion and potential loss of a vocation as given by Almighty God.

Then there are the cases where an environment in a given diocese or seminary is so overtly homosexual that gay seminarians in formation feel a kind of carte blanche to project their gay lifestyle on to non-gay seminarians or young men discerning a call to the Church by either isolating them on one hand, or in some cases, even going after them physically.

Then there is an entirely different gay diocese-to-seminary tentacle that Church Militant first exposed in our exclusive report last month about the South American pipeline funneling homosexual men into U.S. dioceses and then onto seminaries.

The one we featured focused on an investigation which revealed that homosexual priests and vocations directors from various East Coast dioceses were surreptitiously enrolling gay Columbian men into a number of seminaries including Holy Apostles Seminary in Cromwell, Connecticut.

This all came out in a Church investigation in 2012, and we have to say that Holy Apostles Seminary cleaned house once the rot was discovered. What the investigation discovered was that these young men were actively gay and in some cases were "shared" among various diocesan clergy.

Now, in order to begin to chop off the arms of the octopus of homosexuality strangling the Church, it becomes necessary to begin to name names.

So that's what we're going to begin to do right here.

The archdiocese of Hartford under then-Archbishop Henry Mansell was a notorious participant in this evil.

Today, Fr. James Shanley is an episcopal vicar with the archdiocese of Hartford.

Former seminarians have stated that the internal investigation pointed directly at Fr. Shanley, among others, and Church Militant will be revealing more of these people in the coming days.

In his role, various seminarians revealed to Fr. Shanley that a number of homosexual relationships between various diocesan priests (including the then vocations director) and seminarians within the archdiocese of Hartford were ongoing.

Former seminarians tell Church Militant that all of this is in the pages of the internal report which was shared with various bishops.

Father Shanley also knew of homosexual relationships among those seminarians who were later ordained as priests for the archdiocese of Hartford.

In his so-called "spiritual direction" to seminarians, Fr. Shanley would advise people to be careful and maintain a level of confidentiality about their homosexual relationships with each other.

Father Shanley would often attend "sex parties" where seminarians and diocesan priests would gather together. These parties would often take place on various properties owned by the archdiocese of Hartford, and former seminarians tell us that all of this again is in the follow-up reports to the Holy Apostles investigation.

Now again, various Church authorities — bishops and chanceries — have been made aware of this evil, and still today Fr. Shanley is part of the vast homosexual network, has unfettered access to the halls of power in the Church and to young men discerning their call to the priesthood.

As a final note, just a couple of weeks ago, Fr. Shanley attended a presentation given by Fr James Martin at the University of St. Joseph in Connecticut where Fr. Shanley gave Fr. James Martin a standing ovation following Fr. Martin's talk.

This is how the homosexual network — which Abp. Viganò is currently in hiding from — operates. They promote and applaud each other, they cover for each other and, as long as they don't touch a minor, they are completely unaccountable.

This rot has got to be rooted out and dragged into the light of day.

Pray for the Church faithful Catholics — Rosary, every day, specific intention for the liberation and exaltation of Holy Mother Church that she be freed from this octopus. 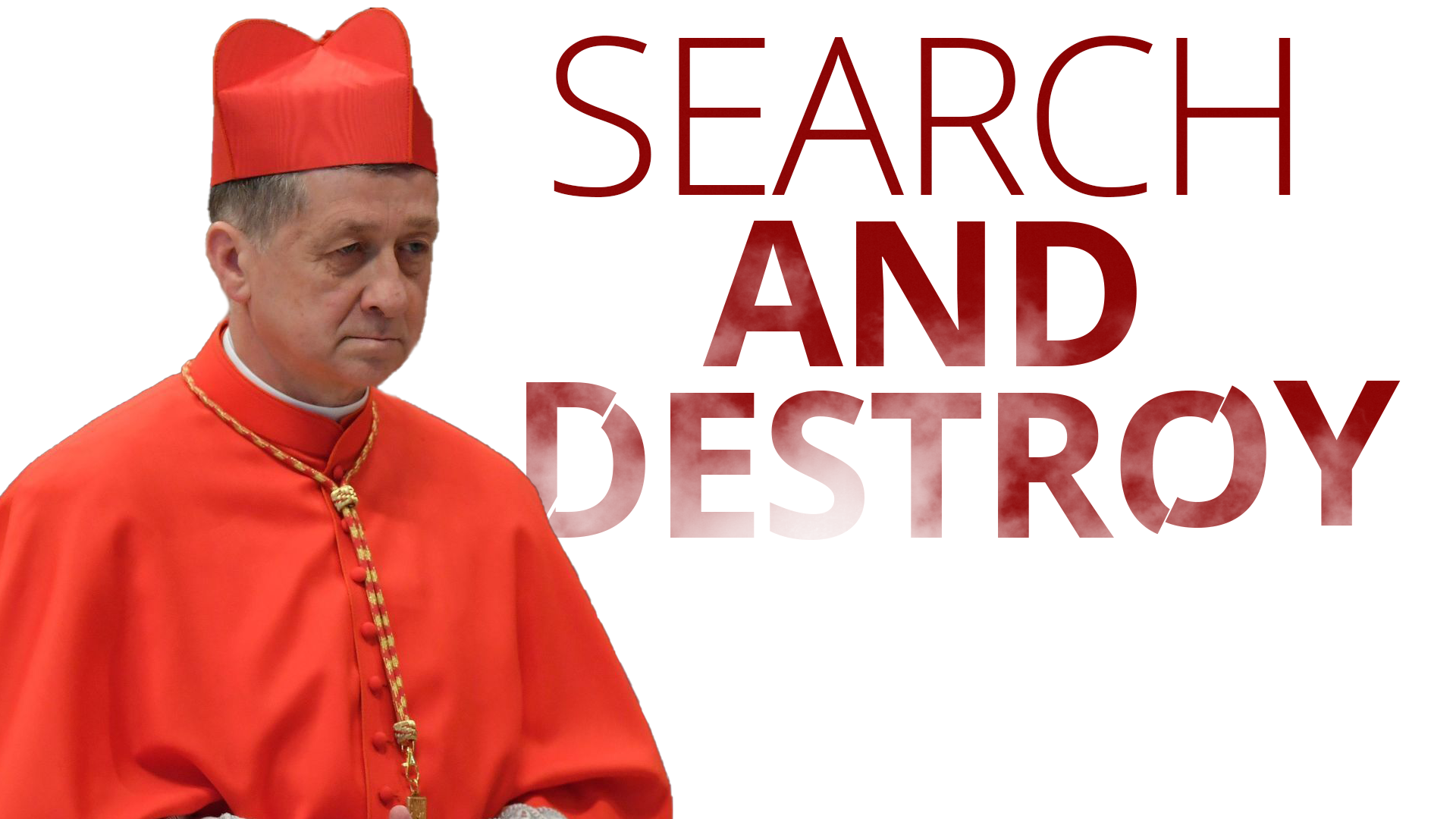 Search and Destroy
They must be silenced.