The ‘Out of Control’ Tour

The crisis in the Church is deepening. Anyone at this point who does not see it simply does not want to see it. You could just travel around the country on a kind of "tour" of out-of-control bishops.

Consider in just the past week, beginning our tour with the archbishop of Detroit, Allen Vigneron, not only permitted the funeral of child-killer Congressman John Dingell to happen in his archdiocese at one of his parishes, he also permitted notorious child-killer Joe Biden to actually receive sacrilegious Holy Communion at the funeral, as seen here.

Of course, not a word publicly before or after the very public event from Vigneron, who thinks staying quiet is the best tactic to take as he and his chancery financiers plot to rip off the faithful to the tune of $200 million.

Then, shift further west to South Dakota, where the bishop of Rapid City circulated a letter at all his parishes to be read at Masses where he directly calls the work of trying to uncover the filth in the Church "evil" and those who are doing it engaging in the "work of the Evil One."

Then, back to the southeast to Joliet, Illinois where Bishop Daniel Conlon publicly told a group of teens and young adults that he isn't sure if the Son of God actually intended to establish a Church — which of course begs the question: Why is this man a bishop in a Church he isn't sure has any more authority than one of the 40,000 Protestant denominations?

Go further southeast and you find the pro-gay emasculated Bishop John Stowe of Lexington, Kentucky, who, even after an independent report exonerated the Covington Boys, still considers them racist, bigoted Trump supporters — the same bishop who is publically all down with sodomy.

Man, you got to hope that the Covington Boys' attorney sues the living mitre off that guy's head, along with all the other bishops who just couldn't wait to score a self-righteous moral victory for their socialist politics by piling on the boys.

Which, step lively now, as we move to Baltimore, one of the original bishops to blast the boys, William Lori, issued a limp-wristed backpedal after the report, saying the archdiocese had been wrong.

Not good enough, Archbishop Lori. First, while you played the original lambasting of the boys, you hid behind the skirts of your chancery staff and let them issue the "we were wrong" statement, not even being man enough to apologize personally, publically. We hope you get sued as well.

Scooting over from Baltimore, back to the Midwest, to Minneapolis/St. Paul, we have Archbishop Hebda, who allowed a pastor of his who promoted a sodomite couple parading an innocent child as a "normal" family, Hebda let this pastor completely off the hook, allowing him to write a half-baked, sort of apology in response to uproar and then go back to homosexual parish business as usual.

Good thing the pastor didn't try to say Mass in Latin — not that he cares — he'd been shipped off to the priest nut house at St. Luke's — phew.

And of course, moving over to the Big Apple where Dolan continues to simply implode as he tries to present himself as authentically Catholic while ignoring Church teaching on excommunication and abortion.

This little tour represents a microcosm why no Catholic should give a dime to their local bishops' annual appeal, which are starting to hit mailboxes all over the country right about now.

Why? Why should Catholics finance these men? They are wolves in the clothes of shepherds. And it's all over the country, perhaps not every last diocese, but enough that Catholics should halt dead in their tracks and consider two things, both related.

First: Is my bishop one of these men — obvious socialists who have no qualms about siding with distorted politics and theology and trying to trick people that it's all Catholic?

Secondly: Is my bishop one of the ones who is not out there obviously, but nonetheless refuses to step forward and publicly call out other bishops for their rottenness?

Former USCCB President Joseph Kurtz was another one hugely excited to pile on the Covington Boys, then did a social media takedown and slinked off back into the darkness.

Why should Catholics in his diocese reward him with giving him their money?

The question needs to be asked: Why is it that these men believe they are completely unaccountable to the sheep, that the sheep are owed nothing by way of explanation?

And more to the point: Why do all these bishops always seem to fall instantly into lockstep with the socialist cause or personalities or politics even in the face of the threat to the Faith?

When they "apologize" as Baltimore's Lori's lackeys did for him, why shouldn't they have to explain why they reacted the way they did? It's not enough to say sorry without an explanation. That's straight out of the Donald Wuerl playbook — lie about why you lied.

But this is just how it is for them, influenced from their earliest days in seminaries by socialist, communist, Marxist ideology smuggled in under the guise of "social justice."

Nope, not one red cent — no more cash.

But the increasing exposure of these men — as well as the scores of others just like them — should not only make the point of how deep the rot is — and widespread — but how it needs to be fought both temporally and spiritually.

It's the same routine we do here on the Retreat at Sea. We begin with morning prayer, Liturgy of the Hours and then everyone — this year over 200 — takes out their Rosaries and we offer up the Rosary for the following intention: The restoration, liberty and exaltation of Holy Mother Church, Pope Francis, the bishops of the world — especially the bad ones — and for all the clergy.

We laity are not going to win this fight by ourselves. In fact, even with all our energies and dedication and good intentions, many of these men are on the road to Hell, and they are taking many souls with them.

We absolutely need to continue the exposure and the reports and the investigations, but without prayer, those are useless. And there could be no more effective prayer than to petition the Queen of Heaven to either open these mens' eyes or plead with Her divine Son to close them forever.

Faithful Catholics want the "out of control” tour to come to an end. This evil needs to be derailed.

Join us every morning, and unite your prayers with ours — 8 a.m. ET, morning prayer and now followed by the Holy Rosary as well. 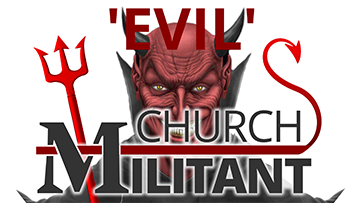