The Plan All Along

I'm Michael Voris coming to you from Rome where we are here covering the so-called Synod on the Youth — and where it is becoming increasingly, not just clear, but obvious that the point of this synod is the normalization of homosexuality in the Church.

In fact, this has been the plan all along, Cdl, George Pell pointed out back in the 2014 Extraordinary Synod on the Family.

You'll recall that first Synod on the Family in 2014 and then the follow-up synod the next year were the synods which produced the apostolic exhortation Amoris Laetitia and all the attendant controversy over divorced and civilly remarried Catholics being admitted to Holy Communion.

That controversy spun off the further controversy of the Dubia, and the Church from that moment on was off to the races as orthodox and heterodox formed around theological issues.

But underlying all this was what Abp. Viganò correctly identified as the "homosexual current" in the Church and specifically the Vatican. Everything that has happened in the Francis papacy traces directly back to the issue of homosexuality — even Amoris Laetitia.

In 2014, George Pell, the cardinal of Sydney, Australia, came out on camera and said the entire question about divorced and civilly remarried Catholics and Holy Communion was nothing more than a "stalking horse" — his words — to grease the skids for the question of homosexuality being accepted in the Church.

Even without changing the teaching — which can't be done — the practice can attitude can be changed, just like the teaching on contraception.

The teaching, re-affirmed by Paul VI in 1968, although in different terms than the previous two thousand years, sit there firmly in place alongside all the other teachings, but it is almost completely rejected, ignored and even mocked in the day to day life of the vast majority of Catholics.

That rejection of Church teaching in one area of sexuality opened the door — or Pandora's Box — for rejection in other areas as well. And since the 1960s, the flood of homosexual men into the priesthood and then their subsequent rise to the episcopate and the College of Cardinals has created the environment where they feel perfectly able to assert their will and force the issue.

And that is what this synod is about — and it's all it's about.

In the weeks leading up to the synod, Cdl. Baldisseri, for example, simply lied about the inclusion — for the first time ever in an official Church document — the acronym "LGBT."

He said it came from an earlier working document, which it did not, and when he was discovered in his lie by reporters, he took the Pope Francis approach of telling the reporters he wasn't going to change or do a thing. And behind the scenes, again in the run-up to the official opening of the synod earlier this month, multiple homosexual activist groups have been working with the various planning committees helping craft the language and agenda.

For example, the group led by gay-cheerleader Chicago Cdl. Cupich wants the Church to recognize, "accept and even honor ... other forms of family" — what he terms every family unit. At the same time, Honduran Cdl. Rodriguez Maradiaga is pushing for "pastoral care" for "marriage between homosexuals, surrogate pregnancy and adoption by same-sex couples."

The fix is in and it's screamingly obvious. This is the moment the homosexual clergy has been pushing for, their brass ring, for the past 50 years.

And if a certain percentage of them rape altar boys and destroy the lives and vocations of seminarians, oh well, the Pope just ignores it and they know it — so in effect, nothing slows them down.

These men, the cardinals involved in this, are absolute deviants and degenerates, at the very least in terms of theology and who knows what else.

They lash out at victims, just as Pope Francis did in Chile.

They accuse men who were raped by homosexual clergy of gossip.

They are steamrolling over everything in their path — souls, the faith, truth, it doesn't matter, rushing like madmen to their finish line.

They are so depraved in their ambitions to use the Church to normalize their evil that they care about nothing else.

That is the headline here in Rome, the crushing of any and all opposition, on the march toward the blessing of gay sex.

In 2014, Church Militant came here to cover the synod, and, like others, immediately detected that homosexual undercurrent in the working documents — especially the mid-term relatio.

We'd like to take you back for a moment to that very revealing exchange between us and Abp. Bruno Forte, who had actually written into the relatio that "Homosexuals have gifts and qualities to offer the Christian community: are we capable of welcoming these people, guaranteeing to them a further space in our communities?"

Forte's non-response, played off laughingly, like demons do, was very suspicious at the time for those who were listening intently like Church Militant. That small section in the mid-term document was the camel's nose under the tent.

James Martin appeared on the scene announcing unprecedented signs of hope for gays.

Other Vaticanistas called it an earthquake and beyond remarkable — and it was. Every homo-cleric in the Church got the message. The time had come, at last, to have the Church bless sodomy in the name of charity and mercy and justice.

And four years later — almost to the day — these same sodomite clergy have assembled again, using children and young people as their cover, to look like and pretend they are listening to the young.

They will produce an already determined likely already written document, "vote" on it and then declare the Church has changed, not necessarily the official teaching, but in every other way conceivable.

Pope Francis will more than likely produce some statement or document and then the gay cabal here in Rome will assert all this evil as being the work of the Holy Spirit, continue to advance homosexual clerics, cover for their evil, refuse to answer media questions, work on producing a fake investigation, attack victims while pretending to care for them and allow good, mostly young, priests to be completely plowed under by their homosexualist bishops.

Anyone who thinks the Church is pulling out of this maelstrom anytime soon simply doesn't understand the situation. If there was ever a time for the faithful laity to step up, this is it.

Stop giving money. Start demanding adherence to the teachings of the Church.

And get on your knees. 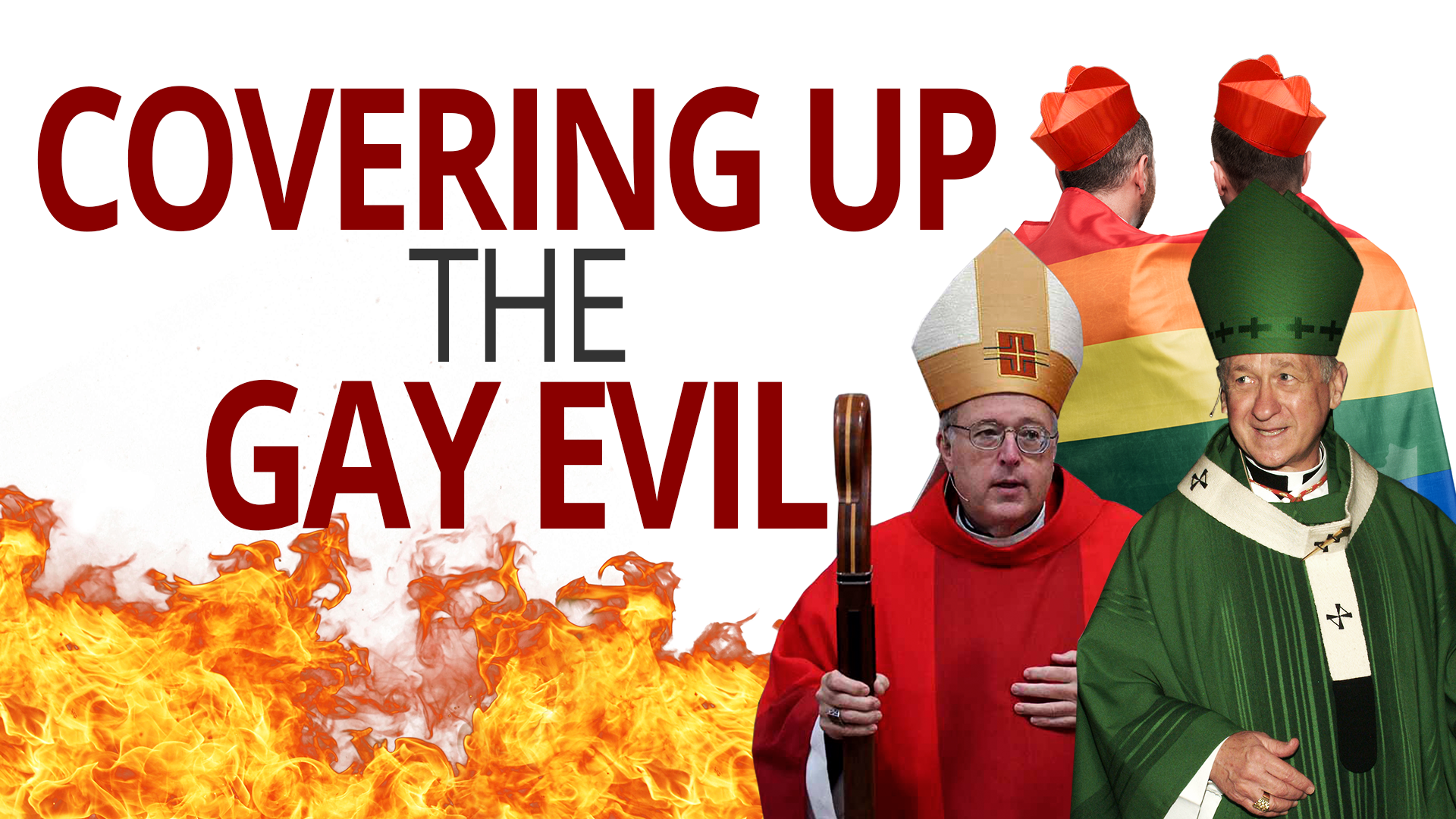 Covering Up the Gay Evil
We must expose it.