The Pope and Sodomy

Has it appeared "odd" to anyone else that there are so many promoters of sodomy around Pope Francis? Hardly a week goes by where some outlandish gay thing after another fails to make an appearance in some manner, shape or form — from reports of the gay orgy in the apartment of Cdl. (Francesco) Coccopalmerio's assistant near the end of last year to Abp. (Vincenzo) Paglia's homoerotic painting to the gay-themed Nativity set in St. Peter's Square to gay cheerleaders Fr. James Martin and Fr. Thomas Rosica's special jobs in the Vatican bureaucracy to a very gay-friendly company running aspects of the Vatican's communications apparatus to the infamous line in the Synod on the Family's 2014 Midterm Relatio that homosexuals have certain gifts and qualities, an idea sneaked into the document by Abp. Bruno Forte, known to be extremely gay-friendly. It's so much, people are wondering when the Dome of St. Peter's is going to be painted pink. And believe us when we say those examples are just the tip of the iceberg.

The ascendancy of the homosexual clerical culture really took off in Rome and other quarters of the Church decades ago — slowly at first but then has picked up steam. Pope Benedict even admitted recently that he had encountered a group of four or five homosexual cardinals he had to deal with.

Pope Francis at the beginning of his pontificate created international headlines when he admitted privately there was a gay lobby inside the Vatican. Of course, many people became very concerned when the Holy Father appointed Msgr. Battista Ricca to head up the Vatican Bank. Ricca was reported to have carried on a gay relationship with a captain in the Swiss Army during his time in Uruguay  — so notorious in fact that clergy there appealed to the Vatican to have him removed. It was Battista, as a sidebar, that Pope Francis was talking about back in 2013 when he gave his well-documented comment, "Who am I to judge?"

It's also important to note that privately various orthodox types in the Vatican and Rome are expressing deep concern that homosexual practice in the Vatican "has never been worse," as recorded this past summer in multiple news reports. The Vatican has been overrun by a gay culture which promotes its own kind from within. The great danger, here, is of course that active gay clergy or those who support it cannot be transmitters of the authentic faith. They are living lives or supporting others who live these lives which run in complete contradiction to the tenets of Catholicism, yet they seem to have control over practically everything in the Church. And it has a supporting or trickle-down effect throughout the Church.

For example, in next months, virtually heretical Religious Education Congress — sponsored by Los Angeles Abp. Jose Gomez — one pro-homosexualist after another dot the lineup of invited speakers. Privately, here in the United States, priests will tell you that a gay mob runs practically every level of the Church which we have ample proof of in Cdl. Timothy Dolan's archdiocese of New York. Last month, a homosexual priest came out to his parish at Sunday Mass in the archdiocese of Milwaukee, and Abp. Jerome Listecki praised him and said Catholics should support him.

Father James Martin is allowed to openly lie about Church teaching in parish after parish and diocese after diocese, and practically no one in the hierarchy says a word. In fact just the opposite, they come out and support him and even one-up him in their assaults against the Faith, saying gay couples can receive Holy Communion as Cdl. Blase Cupich did in Chicago or that we can just ignore all that sin stuff and have a pilgrimage for gays like Cdl. Joseph Tobin did in Newark, New Jersey. And on the other side of the Atlantic, Cdl. Reinhard Marx has come out publicly and said the Church should begin blessing same-sex unions, something Abp. Johan Bonny of Antwerp, Belgium, had already called for a couple of years ago.

All over the Church in the West calls for the embracing of sodomy from the hierarchy are accelerating and increasing in volume. They style it as respect and compassion and human rights etc. But what is at the heart of this is sodomy, plain and simple? Nobody is saying that people struggling with their crosses, whatever type of cross they have, should be treated in any other way than with compassion and respect. Of course they should. It even says that in the catechism. But it is a bridge too far to call on Catholics to accept the sin, thinly veiling it as love when it is anything but love. Call it what it is, it's sodomy. And these bishops and cardinals cannot support what they claim to support without also supporting that.

These gay unions that they want to bless, uplift and support are unions centered around the belief that sodomy is a perfectly legitimate expression of their feelings of love for each other. At some point, reasonable minds have to pose the question: is the reason so many prelates and cardinals are pushing so hard for something that affects so few people because they are homosexuals themselves? Seriously, if Martians landed on earth tomorrow, they would think the Church was the gay rights lobby in robes. It's practically all they ever go on about.

These men are sowing confusion and error in the hearts and minds of the faithful, as well as promoting an evil agenda which the world embraces, and they are using or rather abusing their authority and influence to do so. They need to repent of their wickedness before they die or hellfire awaits them. And they need to publicly admit the horrible circumstances in to which they have placed many souls, pushing them to the precipice of Hell.

What the laity have to understand is this simple fact as hard as it is, maybe, and as unpleasant it is to think about it; these men hate the Church, even while they claim to love it. They hate the Truth because it convicts them and their consciences and exposes the evil that they harbor. And they hide all this evil and contempt and scorn for the Church under cries and appeals for compassion and kindness, something they are unwilling to extend to souls who actually need it.

They have found in Pope Francis, who cares about mercy, even to the point of allowing confusion to foster, a man whose strings they can easily tug, using that "mercy" argument to hide their real agenda which is an overthrow of the Church. A final warning to them since they have no supernatural faith — and you cannot have supernatural faith and behave like this — they are incapable of seeing the Church in a supernatural way. To them, it is a merely human institution that can be altered and refashioned according to the whims of mere humans. But the Church is not merely human. It is a joining, a mysterious union between God and man, and as such it belongs to God.

He will not allow this to continue much longer because the rabid gays in the Church are now touching sacred things, wanting to declare that which is evil, good, and that which is good, evil. When Our Blessed Lord sets about to offer correction, it's usually a fearsome prospect. 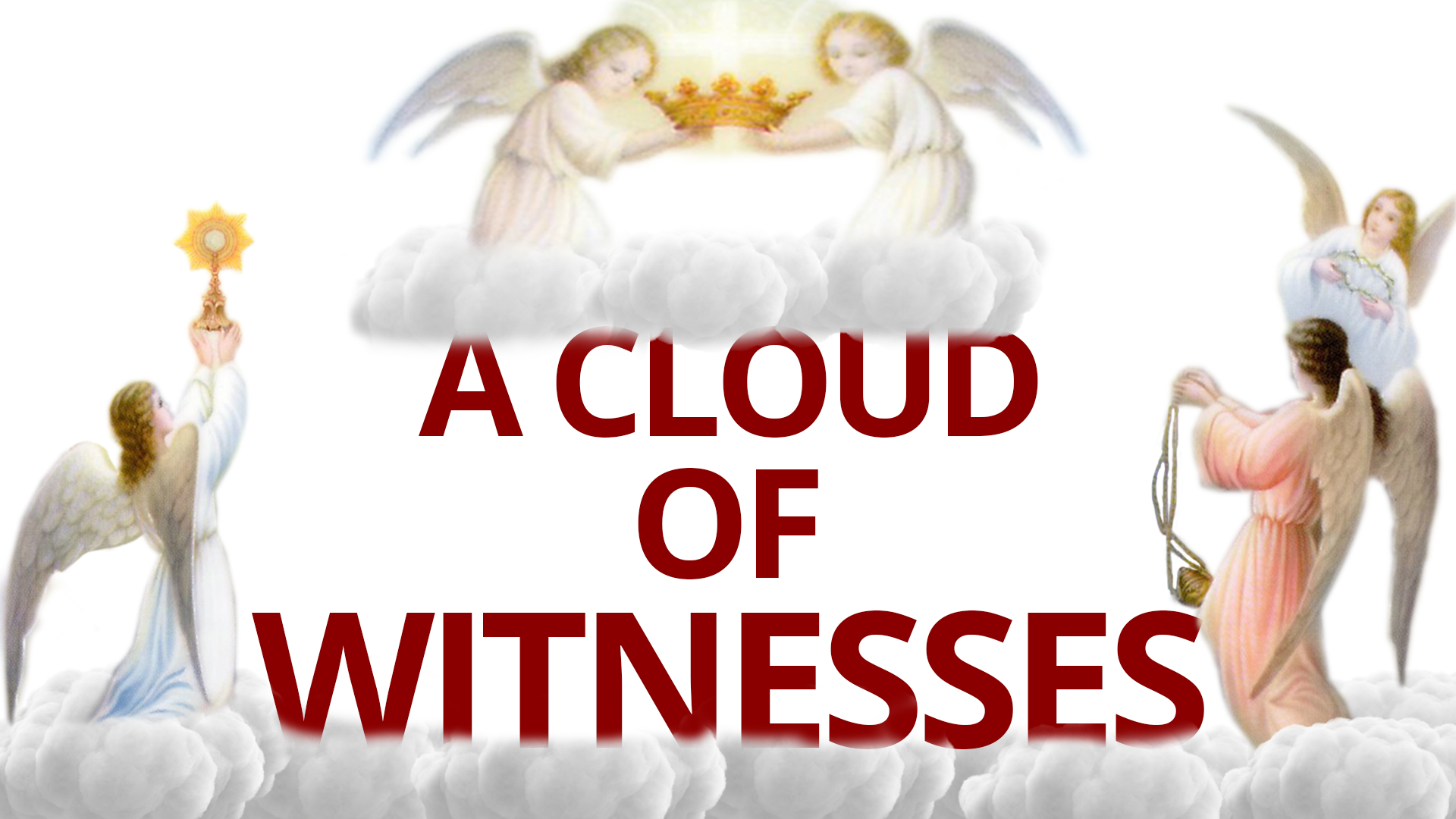 A Cloud of Witnesses
They really do surround us.