Careful what you wish for, Holy Father.

It's a little hard to believe actually, but faithful Catholics are growing more and more concerned that Pope Francis' Vatican is on some kind of tear to advance globalism, and there's not only a lot of evidence to support the notion, there is, at the same time, not a lot of evidence to dispute the idea.

Globalism is, in short, a governing system whereby individual nations cede, or hand over, some of their national sovereignty to a kind of collective government.

So by definition, globalism and nationalism are pretty much in opposition. And faithful Catholics should not let their eyes glaze over on this, but remain, at least for the time being, up at the 60,000-foot level.

This whole issue is being played out in U.S. politics right now among the Democrats, and so naturally, the U.S. bishops have gotten involved in all this as well.

Here is the extremely critical gigantic point to remember: Globalism would usher in one supranational governing authority that would have complete control as though every current nation were just a single state in the worldwide nation.

If any Catholic — orthodox, or even dissenting — can't see the immediate theological, political and cultural problems with that, then they have no pulse, brain or both.

The globalists have been running wild for the past few decades, extolling what they say are the "advantages" of globalism. Indeed, the very concept of the European Union is a regionalized stab at globalism, despite its difficulties.

Pope Francis and his globalist cheerleader crowd in Rome are posturing that the very foundational concept of individual nations are now little else than nostalgic entities which have become overrun by giant transnational corporations.

To carry the thought further, these corporations are all greedy, exploit the poor of the earth, poison the environment and are able to get away with all of it because they get to hide behind and operate through the laws of individual nations.

So for the Pope, there is only one solution to all this: abolish nations, make one-world government and reign in these greedy businesses with fines, penalties and jail time if necessary.

First, this is little else than high-minded-sounding wealth redistribution, a favorite dream of political liberals — remember the encounter between Obama and Joe the Plumber on the 2008 campaign trail.

Obama and liberals are all about taking the money of industrious hard workers and giving it to people who don't work hard or aren't as industrious — they call that "spreading the wealth."

Of course, Obama, Hillary and the 240,000 other Democrats running for president this year never include their own wealth in that equation; it's just your wealth that needs to be spread around.

Second, the entire notion of such a one-world government is the ideal of Marxist communism. Even though Obama said spread the wealth, he was not the first guy with the idea. Karl Marx was.

Third, the key question: Exactly who would be the ruling class making the new laws to impose on the entire human race, and, more to the point, what if the "people" wanted to throw off this one-world government down the road, what mechanism would be in place?

Fourth, what laws precisely would be imposed, say, for example, about abortion, sodomite marriage, taxation, private property and so on?

Fifth, and when it comes to the specific area of religion, if there is one world governing body, then it stands to reason that there would have to, eventually, be one world religion — or no world religion.

Sixth, the Vatican City state is its own national sovereignty. What would happen to it as it would be absorbed into the great universal governmental bureaucratic collective?

Seventh, these liberal ideas are all the rage and have been in the West for decades, and political, theological and social atheists have sought furiously to destroy Catholic-established Western civilization. But can anyone seriously think that the Chinese Communists are going to just hand over their power to "the people"? The Chinese Commies kill people who propose those ideas.

A few days ago, in his bid to dress up one-world government, Pope Francis suggested that the very concept of nationalism had within itself "echoes of Hitler." Them there are fightin' words.

Their purpose is to re-awaken in Europeans the fear of National Socialism and that we should run away from that as fast as our little liberal, right-thinking feet can carry us. It's practically a scare tactic.

That they were able to use an immoral appeal to the concept of nationalism as a springboard to world domination should be thought of.

The goal was world domination — period. So to make an appeal to the concept of nationalism as a kind of emotional blackmail to usher in what would, in the end, be world domination, is either massively uninformed or incredibly disingenuous.

And for the record, it was American nationalism during World War II — all our wealth and resources and industrial might — that proved to be the decisive factor in crushing the Nazis and then the Japanese warlords; so nationalism isn't a bad thing after all.

Throughout history, nations have oftentimes worked as a kind of counter-balance to each other. Whether in warfare or trade or politics — whatever arena — the friction between individual national interests does oftentimes resort in overall good, even if people do tend to dwell on friction more than the good — thoughts of the space race of the 1960s between the United States and the Soviet Union come to mind.

But the discerning Catholic should keep this in mind: None of this is happening in a vacuum. It has invaded and seized control of an entire political party in the United States — guess which one.

Every major candidate for that party's upcoming nomination has touted this concept either explicitly or in their foundational principles.

And mind you, much of that is already in place as we speak, they just want to formalize it.

Ignoring borders and border security isn't really about economics and helping the poor, immigrants and asylum seekers. It's really about destroying national sovereignty — which is why Pope Francis keeps bashing the idea of a wall and slamming any politically conservative American he can.

However, something the Holy Father should stop and consider as he makes these ideological pronouncements from behind the safety of his own Vatican walls, a one-world government, once installed, would very likely have high on its list the pulling down of those same walls surrounding the city-state of the Vatican.

Limousine liberals might have in mind some Marxist utopia, but the true author behind such a notion only has one goal in mind: the obliteration of the Catholic Church. 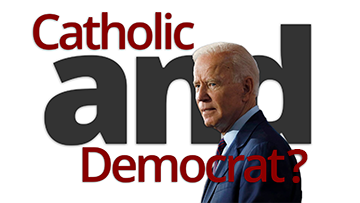 Catholic AND Democrat?
Not possible.