As you know, Church Militant often reports on various aspects of the scandal of clerical sex abuse, as well as the conditions approved by various bishops which allow this scandal to continue.

This past weekend, the archdiocese of Detroit, under the leadership of Abp. Allen Vigneron, made a major gaffe in making public the name of a priest who was accused of a single act which allegedly occurred more than 40 years ago.

And full disclosure here: The accused priest, Fr. Eduard Perrone of Assumption Grotto in Detroit, is the pastor of a number of people here at the apostolate who are parishioners at Grotto.

We are not reporting on this because Fr. Perrone is the pastor of some of us, but rather, since we are based in this archdiocese, we actually know firsthand many of the personalities involved in this case, we have personal knowledge of this case, much more so than we do of other cases we report on.

In this regard, it would be remiss of us not to report and comment on this because we know many inside points regarding the matter.

At each Mass at Grotto this past weekend, representatives appointed by Abp. Vigneron went to the podium and announced Fr. Perrone had been temporarily restricted from any public ministry.

They invited parishioners to go to the back of the Church after Mass and ask them any questions they may have, and they handed out this paper by the hundreds to parishioners saying the cause of Father's removal was due to a credible allegation of sexual abuse of a minor.

Since some Church Militant staff were in attendance for the noon Mass, we went back to ask questions, as we had been invited to.

What we ran into was a wall of silence and refusal to even entertain certain questions. I specifically asked Msgr. Michael Bugarin two questions.

One, why in the statement did the archdiocese not print that Fr. Perrone was denying the allegations and declaring his innocence?

That line is not in Vigneron's statement, or the statement he approved of. Bugarin gave the ridiculous answer that "that's not part of the process," a line he repeated at least a dozen times regardless of the question or the questioner.

But here's the interesting point: Bugarin knew that Fr. Perrone had already denied the allegations both to him and to the Associated Press (AP) a month earlier.

AP had been tipped off about the story by some apparently vindictive individuals and had been calling around on the story for weeks, as the reporter freely admits in the final published version.

Bugarin had been interviewed for the same story and knew that Fr. Perrone had been as well, and here is the critical point: Perrone denied the allegations to the reporter and insisted on his innocence.

That was going to be printed, and Bugarin knew it. Yet, in the archbishop's approved-of statement, Bugarin refused to let Perrone's denial of the charges be part of the statement  — again, blaming the process.

The second and even more damning issue for Abp. Vigneron and his hand-picked episcopal vicar and delegate for matters of clergy misconduct, Msgr. Bugarin, is they actually went against guidelines published by the Pope for what bishops should do in these types of cases.

During the sex summit in Rome last February, various officials gave the Pope their thoughts on some measures that should be followed in these matters.

Pope Francis then published those points — 21 in all — and published them as guidelines that bishops should strongly consider when dealing with these cases.

When I showed Msgr. Bugarin these points, again published by the Holy See for the Pope, personally issued by him, Bugarin said he had no knowledge of them.

That's alarming for the point man for Abp. Vigneron, whose title, again, is "delegate for matters of clergy misconduct."

Frankly, it's his job to know this sort of thing. But he didn't, or at least says he didn't. It makes the archbishop look complicit in this error.

What I showed him on my cell phone as not only the list of 21 points, but this one in particular — point 14 — which reads, directly:

14. The right to defence: the principle of natural and canon law of presumption of innocence must also be safeguarded until the guilt of the accused is proven. Therefore, it is necessary to prevent the lists of the accused being published, even by the dioceses, before the preliminary investigation and the definitive condemnation.

Bugarin and Abp. Vigneron completely disregarded that express desired guidelines of the Pope and not only announced Fr. Perrone's name from the pulpit, causing great upset at each of the Masses, but they also handed out these fliers with explicit detail of it being a report of alleged abuse of a minor and posted Fr. Perrone's name on the archdiocesan webpage of accused clergy — as the document itself makes clear in the first paragraph.

Again, Bugarin told me directly he had no knowledge of that document from the Pope, published on the Vatican's page for the world to see.

And here is why point 14 is so massively important and what Vigneron did so incredibly wrong.

In 2004, the Canon Law Society of America issued a text providing professional guidance to bishops and their lawyers on how to approach these cases.

In undertaking the preliminary investigation, a diocese would also violate the principle of confidentiality if it made a public announcement naming a priest and saying that he has been accused of sexual misconduct or if it issued a public statement about the findings issued by the diocesan Review Board … which are of their nature preliminary and canonically inconclusive.

Such violations of confidentiality by a diocese irreparably damage the reputation of the accused and create a virtually insurmountable obstacle to the appropriate exercise of his ministry.

[It] is difficult to see how his name could be restored adequately after the damage to his reputation was done. It is also possible that a priest might have a civil cause of action against a diocese for making libelous comments about him.

Detroit screwed up big time in the handling of this matter, not to mention granting an interview the AP right in the middle of their own internal investigation.

This is reprehensible treatment of a priest supported up and down the archdiocese, whose only crime may have been that he is a traditionalist and offers the Latin Mass and decades ago blew the whistle on the rampant homosexuality at the seminary and got it shut down by Pope John Paul.

The Deardon gay priests have hated his guts ever since.

Now interestingly, within a few hours, of our encounter with Bugarin, Perrone's name was suddenly taken down from the archdiocesan page of accused clergy, and then about 24 hours later, the archdiocese rolled out a whole new page, with never before seen categories of priests and their status.

Here it is, and as you can see, entirely new categories have been created, with Fr. Perrone being shifted from the former page category of "accused of sexual abuse of a minor" into the "under canonical review" category.

Seriously? Does the archbishop really think this mitigates or makes up for the severe damage done to his reputation — for Msgr. Bugarin standing stone-faced in the back of the parish refusing to say why Fr. Perrone wasn't allowed to at least claim his innocence?

Heck, even the secular media on the AP report extended him that courtesy.

That AP report has gone international; hundreds of millions of readers and viewers in Italy, London and every major daily in the U.S. have seen that story. It even ran across a ticker on Fox News.

All over the world, Fr. Perrone's name and reputation have been demolished by the actions of this archdiocese and their at least carelessness in not following common sense practices presented by the Canon Law Society of America and even promoted by Pope Francis himself.

And no, changing around a website on a holiday weekend hoping no one would notice doesn't cover it.

These actions by this archdiocese are despicable, especially given the highly dubious nature of them.

Why hasn't the archbishop allowed Fr. Perrone to publicly declare his innocence, especially in light of hundreds of millions of people who now think of him as a predator priest?

What in the Hades are archdiocesan officials doing on the phone with AP talking about a case they still don't have all the facts on?

Why did they distribute the damning statement to the media when the exalted "process" hadn't even gotten off the ground?

Is the process to really throw a priest who maintains his innocence to the wolves of the secular media?

Did the archdiocesan legal firm of Bodman actually write that statement and then the archbishop, in consult with Bugarin, just sign it and send it out?

If so, then who is actually running the diocese — the archbishop or the lawyers? Just who is calling the shots here?

How is it that the man in charge of all these cases doesn't know about the Canon Law Society guidelines or that the Pope — the Pope — had issued guidelines against this very sort of thing.

And to think, all of this coincides nicely with Abp. Vigneron's recently launched push to choke almost $200 million from the faithful in his "Unleash the Gospel" initiative.

How about unleashing the truth here? Why has Fr. Perrone been treated so disgustingly?

For the record, a Facebook effort is now gaining steam by former altar boys of Fr. Perrone — and there are many over the years — rushing to his defense, saying they have never seen or heard any such misdeeds by Fr. Perrone in any capacity at any time.

Dozens have signed, and the list is growing. In fact, the AP even went looking for other alleged victims and couldn't find any — even admitting that three they spoke with defended Fr. Perrone.

This evil which has engulfed the Church, the evil of homopredation, has created this climate whereby bishops will betray even faithful clergy on the advice of lawyers and incompetent chancery personnel.

Archbishop Vigneron, the buck stops with you. You said a couple of years ago that you were introducing a "new DNA" — your words — into the archdiocese and things were going to be different.

That there would be transparency and accountability. Well, if you ever had a chance to make good on those promises, now's your chance. To Hades with the "process" that your point man is so in love with.

Let Fr. Perrone go on camera, in his collar, and announce his claim to innocence, especially since it was your press release that has blackened his name all over the world. 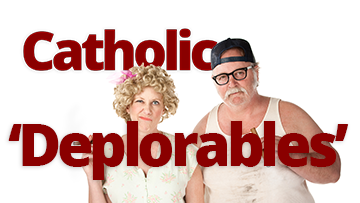 Catholic 'Deplorables'
Who have their finger on the pulse of everything in the Church.