One is needed in the Church.

It's interesting to listen to the bellyaching of the mainstream media over Donald Trump's outsized influence over the Republican Party. They love the storyline — they're enthralled by it, in fact. And this does happen to be one of the rare times there is a little bit of truth to what they say. Trump does have a massive presence over rank-and-file Republicans — at least mostly, anyway.

However, he has come up with some really weird endorsements in recent weeks that are enough to have some people start talking about "Trumpism" without Trump at the center. In short, he was the catalyst for a movement that may soon outgrow him.

There is a civil war going on within GOP politics, and what used to be considered a two-camp civil war may actually be becoming a three-camp war: the establishment, the Trumpsters and the emerging camp of "more Trump than Trump."

How that all plays out, we will see, but curiously, in their starstruck coverage of the Donald and the GOP bloodbath, they never seem to highlight one salient point that may, in fact, be the salient point: The Republican camp is still capable of actually having internal conflict. The Democrats are not.

That's because every single Democrat who used to be called "moderate" and who can be purged, has been purged. There is no such thing in the Democratic Party anymore as a moderate. They've all been politically murdered.

There is no such thing in the Democratic Party anymore as a moderate.

There might be the occasional Joe Manchin with the extremely unique circumstances surrounding him, but that's rare. Manchin's circumstances are that he's from one of the most pro-Trump states in the nation; roughly 70% of the West Virginia vote went for Trump and 30% for Biden.

In political terms, that makes Manchin essentially bulletproof from Chuck Schumer and Nancy Pelosi. But Manchin isn't really a moderate, he's just moderate compared to his fellow Democrats. The Democrats have purged virtually all dissenters from their ranks. There is only one pro-life Democrat left in D.C., and even he is on life support.

But over in the GOP, things are very different. Unlike over at Democratic Party headquarters, life is exciting at GOP gatherings, as the various camps slug it out for control.

The establishment is proving to be much more formidable than the Democratic leadership, who caved to their own crazies in a small amount of time. AOC and Bernie Sanders and their nutty "Green New Deal" globalist vision of humanity now rule the roost, and Nancy and Joe simply capitulated and now are just along for the ride.

The patriots' "America first" mentality is ascendant within the rank and file, thanks in no small part to Trump. But as we said earlier, even Trump is starting to prove to be "not Trump enough" for some of the patriot class. The patriot class wants the GOP purged the same as the Democrats purged their own ranks. They want the compromisers gone. They want the elites gone. They want a party that listens to them, not lobbyists, D.C. insiders or RINOs.

Frankly, a purging is necessary from time to time. In "peaceful" political times, the compromisers get in — those who are more self-interested than they are concerned about the common people.

Of course, the purging that happened in the Democratic Party was a purging not of the usurpers but by the usurpers. Their love and embrace of immorality and the party's anti-God agenda moved the entire party to the edge, and the more it lurched left, the less room there was for those considered moderate.

But in the GOP, moderates abound with compromisers galore. The difference here is a question of purity.

But if the political play is always for the man in the middle, what you are left with is a vanilla, do-nothing approach where those loyal to the party are largely ignored. Loyal Democrats, as well as loyal Republicans, would each consider they've been sacrificed on the altar of political blandness. And on that score, they are correct — or at least were correct.

There is no more political blandness on the Left. They are all-in on ideological purity. The difference, however, between purist Democrats and purist Republicans is that the Republicans do not have a controlling media.

For example, each night from 6:30–7 p.m., in just that 30-minute window, millions and millions of Americans tune in to the three national network newscasts. Here are the numbers from Memorial Day week:

Doing the math, that's 17.7 million viewers in just half an hour — and that's on a holiday week. Eighteen million people each night is mighty impressive — and that's just watching television and with just one broadcast show per network. You can toss in another million-plus viewers on the internet.

What the Democratic leadership — freshly minted with its radical agenda — seeks to accomplish is to have its agenda pushed hard by its ideological partners in the mainstream media.

Meanwhile, an alternative media has arisen to present a competing narrative, but it has not yet been able to reach the mainstream (not for lack of effort, mind you).

Why are we here at Church Militant so focused on all of this? Because the parallel is happening in the Catholic world. The Catholic Marxist camp is in control, that much is clear. And it also has a narrative-controlling media. Over in the camp of those who believe the Faith, there is a mad scramble for control of the anti-Marxist messaging.

But for the most part, those media outfits (if you can call them media in any meaningful sense) are either compromised because they are beholden to the bishops, or they are massively unprofessional and more motivated by clicks than anything they actually report. From unapproved apparitions and crazed "visionaries," to an extreme lack of vetting of their stories, they are proving no match for the Marxist gorilla firmly camped out in the Church.

The purity test in the Church must be based on the Church, Her teachings and history — not on personal agendas willing to overlook sex abuse because the priest says the Latin Mass, for example.

That's where Church Militant has made its mark.

These two alternative media camps — one in the political world, the other in the Church — still suffer from a believability factor because they aren't really journalists. They don't properly vet stories; they don't even seem to know some basics of journalism per se or, if they do, they ignore them.

The Democrats were able to purge their ranks of any pro-lifers and any middle-class-minded politicians because they had a corrupt media laying the groundwork for them. Crooked bishops were able to wreck the Church because they controlled the narrative through their media operations, and almost no Catholic alternative media has been up to the task of smashing that narrative to pieces.

That's where Church Militant has made its mark, and we promise you, as we up our game, we will continue to be worthy of your trust. The crazies in the Church must be exposed and the ship set straight. Only truth can accomplish that.

A purge in the Church must happen — just like it has happened on the political scene. 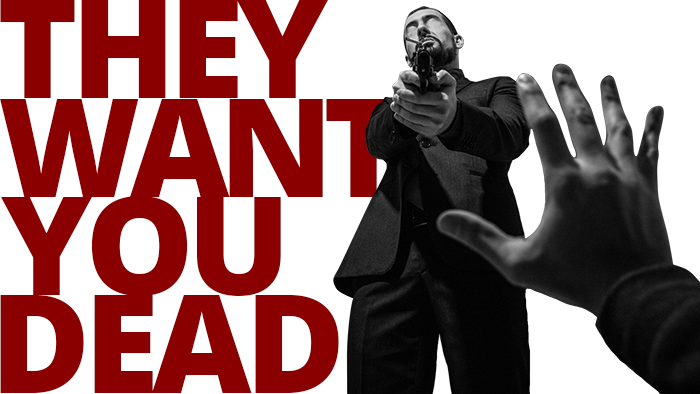 They Want You Dead
And they have a lot of help.