The woman behind the throne.

This entire week, we have been focusing on misdeeds and lack of transparency and the like here in the archdiocese of Detroit so we can present a sort of microcosm of how business is conducted in the Church in many dioceses.

Since Church Militant is located here in this archdiocese, we obviously have much more on the ground knowledge of how things run.

But the main point to take away is Detroit is not singular in this regard. Every diocese or archdiocese has its corruption, its deliberate lack of transparency, often institutionalized specifically to cover up the corruption and so forth.

As you might imagine, not many in the chanceries across the nation are particularly thrilled at these kinds of exposés, but they also know what were are presenting is true. For example, no matter what the organization, policy is set by people. It's the meaning of the saying: personnel is policy.

So when you look at a given diocese, for example, the policies that you encounter are established by the chancery staff and approved by the bishop or archbishop. Or, in the case of a wimpy man who is bishop or who is afraid of something from his past being revealed, the chancery staff actually runs the show oftentimes.

Here in Detroit, multiple clergy say they are in fear or wonder about a woman by the name of Lory McGlinnen. She holds the title of archdiocesan director of parish life, but she wields an enormous amount of power, even informally.

Witnesses say she exercises her authority in a manner that is heavy-handed and excessive.

She always refers to bishops and priests by their first names, for example, a level of familiarity that makes quite a number uncomfortable, but who are unwilling to face her wrath by saying anything.

Likewise, many in the archdiocese question why Abp. Vigneron would invest so much authority in a woman whose only reported education is in communications and urban planning. She has no training in theology, canon law or basic business administration, and that certainly shows in her work. Dwindling numbers of parishioners, depleted parish bank accounts, the shuttering of parishes and liberal priests being protected and promoted — all these things happen because of her at the helm.

The archbishop's pastoral council is noted for the theological liberals who sit on it and discuss how to handle situations deemed as "delicate."

If a priest is called in to downtown to explain this or that, Lory is right there front and center running the inquiry.

She also has authority over a pile of money known as the "Parish Empowerment Fund" where she gets to decide which parishes get how much for various projects.

Her track record has shown she is much more generous with those funds to parishes faithful Catholics would view as liberal and pretty stingy with parishes viewed as more conservative. It's the talk of the town among the priests.

These funds that come from the parishioners through the CSA and previous multi-million-dollar capital campaigns are a way for her to advance her personal radical left-wing agenda for the Church.

McGlinnen has amassed so much power and authority in the day-to-day running of things in the archdiocese that she has earned the nickname, "The Queen Bee," and many priests do their best to steer clear of "The Queen Bee," to stay off her radar so as not to run afoul of her. If you're a faithful priest that adheres to the Magisterium of the Church, you're likely to get stung.

But the question hanging out there is: How does she have such influence and authority?

That answer may lie in her close relationship with Msgr. Patrick Halfpenny, one of the old guard here in Detroit who still holds a lot of sway.

He is pastor at the grandiose parish of St. Paul on the Lake in posh Grosse Pointe — a splendiferous wealthy parish where he has been since 2003.

His claim to fame among the priests is that newly ordained priests that are conservative are assigned to his parish to correct "potential pastoral problems." If he can't "break them in" and eradicate their conservatism, then they're banished to parishes in the periphery of the archdiocese never to be seen again.

Notable is the close bond between Halfpenny and Detroit Abp. Allen Vigneron — two Cdl. Dearden-era classmates both ordained in 1975. Over the many years, they have maintained their friendship and it is this that multiple sources say is the reason behind the power and prestige of The Queen Bee.

Like they say, it's all about relationships — who you know — and in the case of McGlinnen, she is close friends with the archbishop's close friend. And this raises some questions. Is the archbishop well served by such a tight inner circle which many are nervous about approaching with truthful assessments?

Secondly, when the archbishop announced that he was introducing a "new DNA" into the archdiocese, how does that happen when the very people who ran the archdiocese for decades are still the same ones in charge?

McGlinnen is carrying the water for old guard — namely, Halfpenny. During his time in the chancery and power structure of the archdiocese, Halfpenny was director of the archdiocesan communications department from 1979–82; spiritual director at Sacred Heart Seminary from 1982–88.

He served as editor-in-chief and associate publisher of The Michigan Catholic newspaper from 1994–97, before being appointed vice rector of Sacred Heart Major Seminary from 1996–2003 where he scourged and purged faithful men seeking to become priests.

He has also served on the Presbyteral Council and as director of the Office of Clergy and Consecrated Life from 2009–11. His decades of experience of holding influential positions in the archdiocese is the reason why the archdiocesan DNA is so badly infected.

It is the close relationship between Vigneron and Halfpenny which is the fuel in McGlinnen's tank, and because of this, she has the ability to make faithful priests lives absolutely miserable in addition to simply running the show.

Yet these are personnel decisions that Abp. Vigneron has made and charged these people with implementing his "Unleash the Gospel" plan coupled with the highly protestantized Alpha evangelization program.

McGlinnen, in fact, was one of his first hires back in 2009, shortly after he became archbishop, no doubt at the strong recommendation of Halfpenny.

The entire shift of the archdiocese under his reign has been to protect and appease the homoclergy — many of whom were his classmates — keep personnel on board like communications man Ned McGrath, who made his career deflecting the truth, and bring on some new people who would willingly embrace his Catholic-Lite approach to rebuilding the archdiocese.

The headlong rush to convert the archdiocese into a shining example of the charismatic renewal has fallen flat on its face, largely owing to the fact that too many of those involved in it push a watered-down Catholicism in presentation.

Privately, not a few priests are disturbed by the constant shoving of Alpha and "Unleash the Gospel" stuff down their throats, one of whom the chief shovers is The Queen Bee.

But they do not feel as if they can gain access to their spiritual father because she is always involved. Waiting in the wings is the next major fundraising campaign of more than $200 million that a good number of people are privately dreading rolling out.

The very idea of asking for hundreds of millions of dollars more, on the heels of a just recently concluded $130 million campaign while there are state and federal investigations going on and the U.S. Church is reeling from all the news doesn't appear to be very prudent.

In addition, news that the archdiocese owns a pretty sweet condo in the Cayman Islands that the auxiliary bishops and select chancery staff spend time at throughout the year doesn't seem to fit the narrative of a "new DNA" or an explosion of transparency that McGlinnen is enforcing.

The impression from a number of priests and faithful parishioners who are seriously fed up and are talking to Church Militant is that this is little else than a case of rearranging the deck chairs on the Titanic with The Queen Bee in charge of the effort. The same people from 40 years ago are still the same people pulling the strings behind the scenes, and all they've done is hire close friends to keep the engines turning.

And the good people, those who understand the spiritual chaos and want something seriously done about it, are blocked time and again. In the meantime, the archdiocese continues to shrink and fade away.

When I moved here to Detroit in 1990 and began working at the CBS affiliate, there were 400 parishes. That number is now almost half.

What is going on here is the classic example of what is happening in many many dioceses — a hippie theology, a Church of Nice approach, an old guard still trapped in the 1970s that has little tolerance for tradition, that needs to cover up its sins of the past, coming up with new slogans and money campaigns before all the old people die off.

And in order to keep the fires burning, as they slowly die out, they hire friends instead of visionaries who will continue to manage the decline.

Maybe all this has to happen so that all that it is wrong with it can simply disappear and what remains will be a more true authentic understanding of the Church and the one true faith. 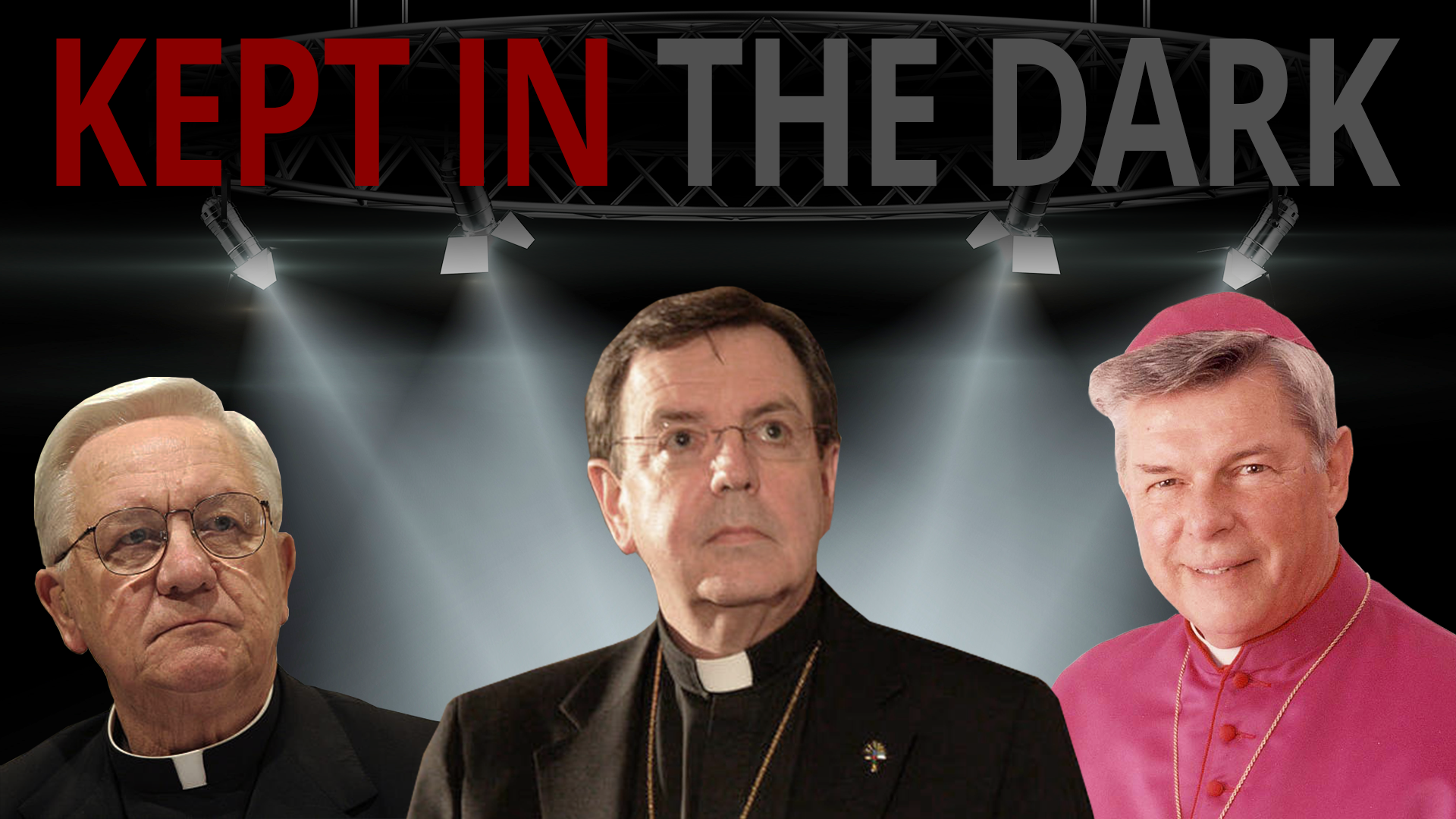 Kept in the Dark
But the light always shines through.