Following up on yesterday's Vortex where we broached the subject of a loss of faith in the Real Presence, against the backdrop of the continuing saga of Amoris Laetitia and, what some say, is the permission it grants for divorced and civilly remarried Catholics to receive Holy Communion — there is much to talk about here.

The debates have begun in the Catholic world about the story Church Militant broke over the weekend that the interpretation of Amoris Laetitia by the Argentine bishops has now been officially and publically raised to the level of authentic magisterium by Pope Francis himself. Is this exactly what he meant to do? Whether he meant it or not, does it even fall within his authority to do so? If so, what exactly did he do, and why did he do it? If not, same question, what then exactly did he do, what does it mean, and why did he do it?

Against that backdrop of mass confusion and debate, another much more important question needs to be asked. How is it — regardless of what the pope meant — that so many various bishops and bishops' conferences seem to agree that those in an objective state of mortal sin can in some circumstances receive Holy Communion? And again, regardless of what the pope has to say or muddies the waters about, we have on record various bishops making that exact claim.

This is bringing to a head a very great and troubling concern in the Church — the rejection of the belief in the Real Presence by various, meaning a majority, of Catholics, laity and clergy, especially among the clergy. At this point, we have to step back and look at this from a purely spiritual standpoint. Too few bishops are defending Our Blessed Lord in the Eucharist. They allow Catholics who are public and notorious sinners to walk up and receive Holy Communion — Catholics like a bevy of pro-abortion politicians. This is in direct violation of Canon 915 which says such people must be refused. Yet here in America, a quiet detente has been reached with the devil, a contract whereby this evil can continue essentially unchallenged.

Some of the luminaries of the Church in America are on the record as saying they will not have a political war at the Communion rail — as if. When cardinals like Timothy Dolan, Blaise Cupich and Donald Wuerl speak like that, it sends a message to the rest of the U.S. bishops that real concerns like protecting the integrity of the sacrament and causing scandal to the faithful is not as important as playing political patty cake with the culture, especially the Culture of Death.

And here we must refer back to Scripture and the revealing of the diabolical plan to destroy the Church. Satan was present in the Upper Room at the Last Supper. At one point, He presented Himself to Our Blessed Lord demanding the Apostles so he could sift them like wheat. While probably not understanding everything going on with regard to the Eucharist and its institution and the role the Apostles and their successors would play throughout time, he understood enough to demand that Our Lord hand them over to him. Whatever role they were going to play, it was clear to the mind of the Demon that it was going to be a significant role, and he wanted to end this before it began. Well, that was then. Certainly today, the diabolical understands the full import of the Blessed Sacrament, and its absolute central role in the Church.

The Blessed Sacrament is Jesus Christ — Body, Blood Soul and Divinity — and while the Demon cannot destroy Him, he has been masterful at destroying belief in Him, even and especially among the clergy. What he could not accomplish completely in the Upper Room 2,000 years ago, he has managed to achieve some measure of success with especially in these days. Consider, the large number of Catholics prelates and clergy who approach the Blessed Sacrament with little more care, attention, devotion and reverence than a typical Protestant congregation or preacher. They see vaguely a "spiritual presence" about the bread and wine but not the Real Presence. They completely miss what we could term the real deal.

Recall that it was Martin Luther, also a priest, who set in motion affairs whereby today hundreds of millions of baptized Christians have been deprived of the Eucharist — the central truth of reality —thereby making salvation preemptively more difficult because they lack the abundant graces of Our Lord's Body and Blood. While Luther and a string of his followers largely attacked the authority of the Church, the effect was to bring about a rejection of the Blessed Sacrament, for the Blessed Sacrament is the source and summit of the Faith. Everything flows from it, and everything flows to it because "it" is Jesus Christ personally and physically present on earth.

The very life of the Church is the Blessed Sacrament, so for there to be ambiguity, confusion, a lack of conviction, doubt, a lack of reverence, uncertainty, dismissal and all of the above about it, creates chaos in the Church as we see quite clearly. It takes supernatural faith to perceive the Truth of the Real Presence, and it is a sure sign of a lack or loss of that same supernatural faith when problems arise surrounding the Blessed Sacrament. The major damage to the Church resulting from the Protestant Revolt of the 16th century was the smashing of this belief.

Today, another revolt, another revolution is being had right in our midst with the same result. Jesus Christ is the Lamb of God — the Lamb which comes from and belongs to God. It was not by accident — nothing is in the affairs of salvation — that John the Baptist recognized this and announced it at Our Lord's baptism. To his listeners, reference to a lamb brought forth images of sacrifice, for that is what was done with spotless lambs. They were reserved for God. Here was the most spotless Lamb ever to be sacrificed. And when the lambs were sacrificed, they were to be eaten, thus completing the sacrifice — the exchange of one life for another.

The abuses which have attended the Blessed Sacrament for the past 50 years, so commonplace in fact as to pass by essentially unnoticed, have taken their toll. The Church is in chaos, and it is in chaos precisely because of the sacrileges, abuses in the liturgy and blasphemies attendant to the Real Presence and the permission given, directly or indirectly, by so any shepherds.

Pray for the Church, pray for a restoration of supernatural faith to leaders who would ignore Our Lord and sell Him out for worldly gain and human respect. There is much work and praying to do. 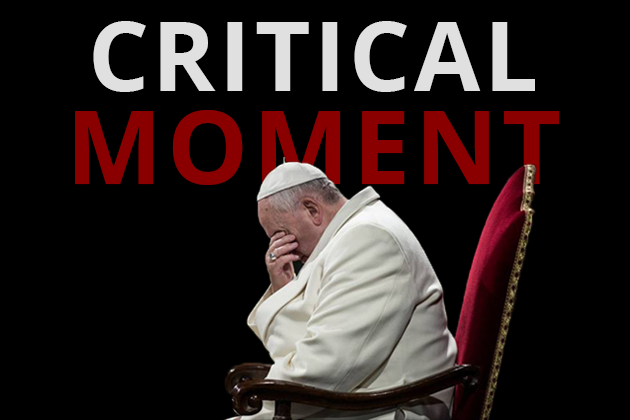 Critical Moment
Pray for storm to be calmed.