The Rest of the Story

It's what Church Militant is all about.

Probably the most famous voice to ever grace American airwaves was that of Paul Harvey, a radio icon who could be heard for nearly half a century by tens of millions of Americans.

What Harvey's approach did — his "rest of the story" — was give people the backstory on something going on. Today, we might call it "background" or "connecting the dots" or "context."

But whatever you call it, it was the presentation that highlighted how things were away from the public eye. Regardless of what he was reporting on, this segment contextualized what people knew just as the headlines.

In many ways, that's exactly what we do here at Church Militant. And while Harvey's Rest of the Story presentations were oftentimes more lighthearted than ours, the same principle applies. That principle is that you need to know the rest of the story.

Church Militant is absolutely dedicated to bringing you the rest of the story.

As we approach the end of 2021, we'd like to ask you to please consider making an end-of-year donation to support our work here.

Only Church Militant brings you the kind of coverage that many in positions of power in the Church have come to fear and loathe. Why? Because they don't like the rest of the story being told because it unmasks their corruption.

This year, for example, we introduced our successful Church Militant Evening News program and tackled issues on there that many would just as soon not be exposed. It doesn't matter if it's political, cultural or theological corruption — we take it on.

Just one tiny example — and a result of it — there is much more evidence that Joe Biden did not win the election than there is that he did. As a result, we always refer to him as "the unelected Biden." And as polls continue to show a majority of Americans have serious doubts as to his legitimacy as having won, we're happy to have adopted that editorial stance.

But that's just one reason. We also talk about the phony so-called vaccine push by the globalist empire, but not just for its own sake (although there is much to talk about in that regard).

But since Church Militant's primary goal is serving Catholics, we talk about the phony vaccine stuff in the context of the U.S. hierarchy. How the bishops en masse have behaved in the health nightmare is beyond disgraceful, and since we take the position that all of it is essentially a power grab, YouTube, again, will not let us publish our Evening News.

But we don't want you going to YouTube or any other social media or tech platforms. We are extremely proud of the fact that, working with our great partner Petros, Church Militant's website is hands down the most robust website in the entire Catholic world. And on this website we have a mountain of news and information for you, available at just a click, informing you on what's really going on in the Church and the World — the rest of the story, not just the ecclesiastical and Marxist media propaganda.

For example, on those two stories alone (the election theft and the COVID scare), Church Militant has produced two outstanding informational Special Assignments covering each in depth — in just 30 minutes.

Our election theft Special Assignment was a daunting task — a tour through the myriad ways the cheating occurred. It was exceptionally well-received.

It doesn't matter if it's political, cultural or theological corruption — we take it on.

Our Special Assignment on the pandemic, and the resulting power grab, was likewise a tour de force through what has been perhaps one of the most powerful advances of Marxism and decimation of individual liberties in world history.

And in each of these cases the U.S. bishops, as a body, have been cooperators with this evil. That is the rest of the story, a story that Catholics need to know.

What Church Militant does is bring the necessary perspective to world (as well as various local) events so you can then inform yourselves as well as others. It is precisely the takeover and corruption of the media by Marxist forces that has propelled the world to where it now is and is continuing to hurtle toward.

Information is king. We say that a lot around here. And within the information world, video is king, which is why we are dedicated to bringing you all this information in well-produced video and television formats.

It has not been primarily through books or radio or print that the general population has been brainwashed and propagandized. It's been through the visual media because the visual media is the one that is most effective at planting images in your mind, invading your literal imagination.

The demonic Marxist leaders completely understand this point, and they are absolute masters at exploiting it. That's why no expense is spared by them to flood your screens with image after image of propaganda pushing their narrative.

No one in the Catholic media world understands this psychology better than Church Militant, which is why we are completely dedicated to pursuing this and leading the charge.

Television production costs a lot of money, which is another reason the Marxists have been so good at it for so long — because they have and spend a lot of money.

So as we approach the end of this year, with what portends to be yet another tumultuous year in front of all of us, we are appealing to you to please consider donating whatever you can to keep us doing what we do, which is, in short, bringing you the rest of the story.

Please just click on the provided link to make whatever donation you are able, and thank you in advance for whatever you donate. 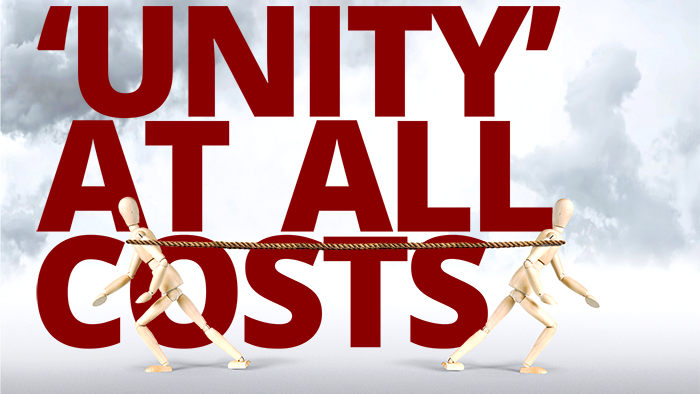 ‘Unity’ at All Costs
False unity is a lie.