It can only be defeated with Catholic truth.

Sometimes you just have to say things like they are, so here we go. Politics in America is all about sex — nothing else. And the 2020 election is all about sex, hands down. The radical Left (which is just another term for Marxists) cares nothing for their pretend causes; they only care about sex.

In their view, government is all about protecting their "right" to have sex with whomever they want, whenever they want and how often they want. Calling them the "sexual Left" is not a stretch — or even the "lustful Left." In fact, it's perfect.

Now, for clarity, the elites at the very top, running the show, their motive is not sex. Their motive is just raw power, but they have weaponized the sexual revolution of the 1960s to advance their cause.

They've taken in enormous segments of the population — even political "conservatives" — convincing them that consensual sex is private, is nothing but a personal choice and is no one else's business.

This is why you see such unflinching support for homosexuality for example (so-called gay rights) among otherwise "conservative" Americans. It's why you often see Republicans defending pornography as "free speech."

Once you unleash the demons of lust on a population, you begin to shake and rattle the foundations of a civilization, and sooner or later, it comes tumbling down. Why? Because with widespread adoption of the notion that consensual sex is private and personal, you give permission for it to become untethered from its moorings in marriage.

That begins the breakdown of the family, which results in the eventual meltdown of the culture. The passions of man are not neutral. They rage and battle against the will and the intellect. Giving the passions permission to take the lead and make the intellect subservient to them is a sure road to disaster, as we see all around us.

Sixty million aborted children, tens of millions of fatherless children, households ripped to pieces, pornography rotting young minds — mostly male — the list is seemingly endless. Young people shacked up, playing house (until they get bored) is instilling a lack of any commitment that reaches into every corner of the culture.

Then there is the "knock-on" anger of a generation growing up deprived of a true home of mom and dad. Every last bit of this plays directly into the hands of Marxism, which would much prefer to have a nation commit suicide than have to fight a bloody war.

All the riots, all the politics — all of it is about sex. That's why Black Lives Matter was founded by lesbians. That's why there is a race to the bottom in both political parties to embrace all things gay. When the Left's leaders go on about guns, climate change, love of illegal immigrants and the poor, education or the death penalty, don't believe them.

All the riots, all the politics — all of it is about sex.

They don't care about the poor: Their policies keep the poor trapped in poverty. They don't really believe in quality education: They constantly reject school choice for children most in need. They aren't really opposed to the death penalty: They execute a million children a year in the womb.

These issues and others are nothing more than class-warfare issues meant to polarize the nation and keep them in political power so they can tighten their grip on the country. The leaders' aim is to keep their buddies in power so that the sexual revolution can continue to roll along. Nothing else.

So, it's curious that so many Catholic bishops, their staffs, their pastors, their parish employees, their religious instructors — all of them — are so silent on all this. In truth, many of the above are actually members of the sexual Left. They despise the Church and its teachings, teachings they are baptized to proclaim.

They believe in the mission of the revolutionaries, which is why they stay so silent about the consequent evil. It's why they never speak of sexual evil but instead prattle on about the topics on that list we mentioned — guns, climate change, illegal immigration, poverty, education, the death penalty.

And among the clergy — especially the bishops — don't you discount their own personal participation in the homosexual agenda. Don't be so quick to dismiss the evil of thousands of altar boys being raped and covered up by them and their gay clergy buddies.

They are ordained and consecrated, true. They are not false shepherds in that manner. But they are false in what they teach and most especially what they do not teach. While politicians and media types and judges and college professors were locking down their part of the culture in advancing the sexual revolution, so too the clergy were busy in their own arena — despoiling the authentic Faith.

They stole — not once, but twice — from the faithful, robbing them of their material wealth by the billions (given in sincerity to advance the Faith) and also robbing their souls by depriving them of what was, by right, theirs — the truth. Why do so few Catholics today believe the Faith, ignore the reality of Hell and walk away from the Church? It's because these wicked leaders set about to create this outcome.

And among the clergy — especially the bishops — don't you discount their own personal participation in the homosexual agenda.

Marxism cannot succeed in the face of muscular Catholicism. So Catholicism — rightly preached, understood and practiced — needed to be wiped out. What neither they nor their diabolical father counted on was the emergence of a faithful troop of Catholics who not only know the truth of the teachings, but fight like Heaven to proclaim it, especially at the crooked bishops.

Back in the early days of this apostolate, long before we knew how evil much of the hierarchy had become, all we were doing was teaching the Faith on our program, The One True Faith. We bought time on local stations and aired it twice each week on Sundays. But the archdiocese of Detroit's gay mafia quickly set about to destroy us. We heard the whispers, had a few people who supported us inside the chancery tell us what was being said, the proclamations that were being made, the official orders being given to Detroit priests to ban us from everything.

All we were doing was teaching the Faith, nothing more. At the time, we were naïve enough to not realize there was more that had to be done. I spoke with a friendly priest at the Sacred Heart Seminary while I was studying for my STB and cried on his shoulder, saying that I didn't understand all the venom being spewed at us.

His answer: "Michael, you need to understand. For 40 years these men have spent their careers trying to confuse the people. And as they approach retirement, along comes this young guy on TV explaining what the Faith really is." It was that simple. With that background, I'd like to invite all of you to sign up and become Premium members and to begin watching our One True Faith series.

We have loads of programs with multiple episodes, but this show — the first one we did — is the one that brought the Detroit archdiocese down on us. It wasn't because we were railing against the evil bishops, not then because we didn't know.

All we did was teach the Faith in plain, simple terms — out of the vast storehouse of the Church's own saints and heroes and theologians and doctors and fathers. Then we put it on local TV, and the Detroit clergy (the bad ones) went apoplectic. There are 112 episodes stretched over eight seasons, with a couple of bonus episodes where we talk about the angels, Hell, Our Blessed Mother, the Eucharist, Purgatory, redemptive suffering, grace and the Church Herself.

You can just start with the first, "St. Michael and the Angels," and make your way through the entire 100+ episodes. See the beauty many of us were deprived of. It's straightforward because, frankly, we don't know how to be any other way, and also because it's how the Faith is best explained — simple and to the point.

This is the Faith that converted the Roman Empire, built Western civilization and spread across the globe, inspiring artists and musicians — but more importantly, producing martyrs and saints, announcing the good news of salvation. If you watch Vortex, you know the style. But here is the Vortex style before there was a Vortex and when the topic was all theology, all th+e time.

So please, sign up today, it's only ten dollars a month, and given the dismal state the Church has fallen into, there has never been a more important time to know, study and share the Faith. Thank you in advance, and we'll see you on the Premium channel. 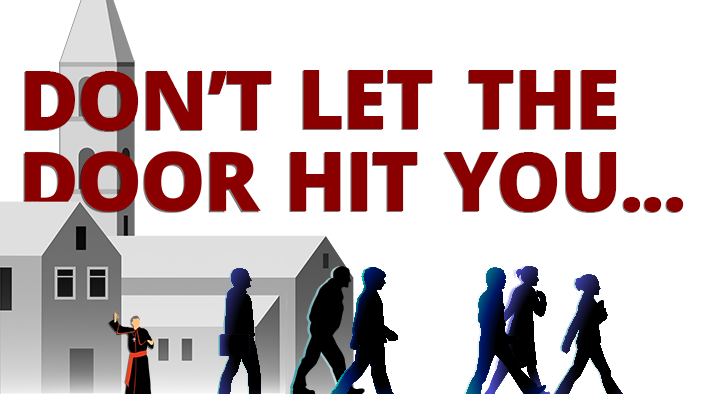 Don’t Let the Door Hit You
On the way out.