The Skinny on Dolan

Well, it's that time of year again. Saint Patrick's Day is this weekend, and in the archdiocese of New York, that means it's time to commiserate over Cdl. Dolan's betrayal of the Faith.

You'll remember how His Eminence, when confronted by Church Militant about the scandal he created with his behind-the-scenes pushing for the OUT@NBCUniversal gay group to be allowed to march in the parade back in 2015, had his comms guy get us forcibly shoved out of the way.

For the fifth year in a row, active homosexuals will march in a parade ostensibly occurring to honor the patron saint of Ireland, as well as New York.

Dolan has since then continued to careen completely off the rails, even going so far last month as to give New York Gov. Andrew Cuomo a pass on signing the most egregious abortion law in world history.

The list of Dolan's betrayal of the Faith is so long, one Vortex couldn't enumerate them all. In fact, so deeply bothered about his reign in New York are people in the chancery and archdiocese that we can't handle all the tips and "inside info" that comes into the studio here.

Dolan is a living, breathing example of all that is wrong in the hierarchy and has been long before Pope Francis was elected. Heck, not too long ago, even his brother cardinal, Sean O'Malley of Boston, ratted him out to the papal nuncio for covering for an abusive predator priest. And speaking of that specific area, Dolan has created a scandal within his own clergy that takes even their breath away.

He, at this very moment, is covering for more than a half-dozen priests in the archdiocese who his own investigator has recommended be removed immediately — this according to multiple sources in New York who are outraged that he would actively do this.

A quick background: In the wake of the McCarrick news last June — and then the Pennsylvania grand jury report and the ensuing cascade of various state attorneys general opening up investigations — the New York attorney general announced a deep probe of all dioceses in New York.

That announcement prompted Dolan to make a big PR move and go out in September and hire Barbara Jones, a former federal judge, to lead an independent investigation into archdiocesan handling of sex abuse.

I've given you a lot to do, judge, but I need your help if I am going to respond to my people's plea for accountability, transparency and action. ... I look forward to receiving your recommendations and your insights, and I pledge that I will take them all with utmost seriousness.

Well, not so much. Sources all over the archdiocese are fuming mad at Dolan because Jones' report to him is now being ignored by him. Sources tell Church Militant that Jones identified more than half a dozen active priests she says need to go immediately, and Dolan is deliberately sitting on the info.

Each year, almost every diocese in the country does priest personnel assignment changes in the June/July timeframe. At that time, some pastorships expire and some priests are reassigned, with pastors usually becoming the new pastor at a new parish.

Our sources tell Church Militant that Dolan is quietly letting the terms of the potentially dangerous pastors just expire, and then, very quietly, he will just not assign them, thereby deliberately violating his public pledge for "accountability, transparency and action."

Too many of the senior leadership in the United States are simply politicians who simply lie, wordsmith, parse their words, split legal hairs so as to deceive — and it's disgusting.

Totally unsurprisingly, neither Dolan — the man who pledges transparency — nor his communications director, Joe Zwilling, have responded to Church Militant's inquiries. Heck, the "transparent and accountable" Dolan hasn't even announced publicly that the report is completed.

And, are you sitting down for this one? Our sources inform us that he is keeping completely out of the public realm that the final bill for the report was $500,000.

A half-million bucks for a report paid for by New York Catholics that he has decided to keep from those same New York Catholics and essentially ignore or at best delay taking any action on because it would look bad for him that potential predator clergy are currently ministering in his archdiocese.

How do people in the archdiocese — lay staff with children — sleep at night, going home knowing that they are a party to all this?

Church Militant has been saying for years now that the rot is far greater than most realize. In fact, it's so deep that until this generation of bishops is simply gone — and whoever they have promoted have also died — nothing short of direct divine intervention is gonna affect change.

As a final note, Dolan is putting the heavy squeeze on pastors throughout the archdiocese to shake down the faithful for $200 million, even sending out what amounts to polite "demand letters" telling individual Catholic parishioners that he and his team have calculated that they can afford to give such and such amount, always in the multiple thousands of dollars — often times reaching into the tens of thousands of dollars.

What New York Catholics will not see or hear amidst all the usual Dolan bluster is he spent a half million of that money for a report he is ignoring.

You knew back then in 2015, when Dolan campaigned hard behind the scenes to permit active gay marriage supporting homosexuals into the parade, that he has no concern for the Faith and that it was just a matter of time until everything got exposed.

Dolan — and the senior leadership of the U.S. Church — is in desperate need of prayers because with the vast bulk of their time on earth already completed, it will not be long before they each have to stand before Jesus Christ the Judge and be declared guilty of treason.

There'll be no parades, no fawning media, no governor to rub elbows with so as to act important — nothing. There will be no defense. What a frightening, terrifying thought.

You don't have too many St. Patrick's Days left, Your Eminence. You better pull your own Viganò before the clock runs out. 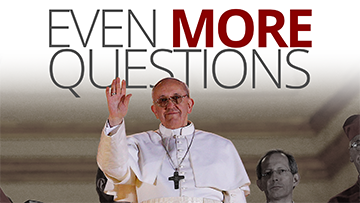 Even MORE Questions
And they never seem to get answered.