Sunshine is a good thing.

It's becoming more apparent that these various synods held in Rome aren't really synods at all, not in the authentic sense of what a synod is supposed to be, anyway. In the real world of synods, some pressing issue in need of deliberation and thinking and discussing and praying over is brought before a somewhat large number of bishops and, after some time, they provide the Holy Father with some consultation on how to address or approach whatever the given issue is. This current synod, along with past ones, only has the appearance of that, when, in fact, most of what is going to be determined has already been predetermined.

Begin with the topic right now playing out in Rome: a shortage of priests in the Amazon. Seriously? This topic gets a month — a whole month — while the issue shaking the Church to its core — sexual abuse, most of it homosexual — gets three days last February. And it wasn't even a synod. Heck, after the wine and dinners and limoncello, you'd be lucky if more than a few hours were actually dedicated to the topic. But here we have the case of something that nicely fits the Left's agenda, dressed up in spiritual-sounding vocabulary, and we're off to the races.

But a funny thing happened on the way to the Forum: a string of PR disasters for synod organizers, not the least of which was the Catholic Commandos' pitching of Pachamama, causing a hypocritical response from the Vatican about "theft" — right in the middle of a half billion-dollar theft by corrupt cardinals.

Months ago, the working document — a kind of agenda guideline called the Instrumentum Laboris for the gathering — was released and was immediately challenged and demonized for the amounts of heresy and apostasy contained in it. That caused so much blowback that at the first synod press gathering, none other than Cdl. Lorenzo Baldiserri had to downplay the document to assembled reporters.

Then, even before the actual synod got underway, there was the spectacle of the Mother Earth-worshipping tree-planting ceremony in the Vatican gardens,  complete with a statue of a nude pregnant goddess, or woman, or whatever; no one seems to be willing to go on record and say what or who it is.

Then, inside the Vatican walls, the Secretary of State offices get secretly raided — secret, that is, until someone leaked the info to Italian media and the head of Vatican security ended up falling on his sword over the whole affair.

The reason for the raid, at least in part? Getting to the bottom of a half billion-dollar theft from the Peter’s Pence fund by high-ranking prelates who are all close to Peter (the pope), who used the money, in part, to buy whoppingly expensive property in London, ostensibly for investment purposes.

Then it comes out that Pope Francis, when questioned, has told intimates that he wants all this confusion because it fits a model of realignment, bringing into existence a new understanding of the Church.

Increasing challenges from faithful Catholic reporters in the press hall about temporal and spiritual anomalies, prelates being chased down in the street, refusing to answer the most basic of questions. None of it looks good.

Then the bombshell news published by an atheist publisher friend of the pope that Francis doesn't really believe Jesus was divine while walking around on earth — a charge that the Vatican at first didn't actually deny, but then had to reinforce given the calamitous coverage.

Then an issue pops up that synod organizers could not have planned for — infanticide — and they are left losing their minds in the press hall, denying everything, only to have it revealed that not only is this an actual reality, but that the Brazilian Bishops Conference knew about it and posted links about it on their website, only to try and hide it the next day, taking down all the links, after an intrepid Italian journalist wrote about it, and it got international headlines.

Then, a few days later, we come to learn that one of the leading organizing groups behind the synod has been taking millions in grant money from the U.S.-based Ford Foundation, one of the world’s largest international backers of abortion and the homosexual agenda.

Then we learn that actual communists were invited under the umbrella of long-time liberation theologian Cdl. Cláudio Hummes, who then denies he had anything to do with it, even after the commies publicly thanked him for bringing them.

And, almost as a side dish, the idea that a list of so-called "ecological sins" was being considered brought almost immediate ridicule from around the world.

Then, thinly veiled charges of imperialism or colonialism were leveled against faithful Catholics who want the effort at evangelizing, and not just inculturation, stepped up.

As far as public relations events goes, this has been an unmitigated disaster for the Vatican.

In fact, the onslaught of negative (and truthful) coverage has so upset and enraged the marxists inside the Vatican, that none other than special papal pitbull Antonio Spadaro felt it necessary to lash out from behind the walls last Friday, attacking faithful Catholics reporting all this. He tweeted that all this is somehow politically motivated: "from faith to politics all is connected."

Spadaro apparently hasn't stopped to consider that that gate swings both ways, blindingly evident in this synod. Yes, it is all about politics.

Just look at the list of everything he revealed: goddess worship, stealing hundreds of millions from Peter’s Pence, infanticide, funding by abortion giants, questions about the pope’s lack of faith in Our Lord’s divinity, active participation by communists, a list of completely manufactured never-before-heard-of sins — these are not the ingredients of a successful Vatican synod. Add to this the rampant speculation that, like previous synods, the outcome is already predetermined because the deck has been stacked by choosing largely only liberal or radical participants, and we have what’s called a dog and pony show.

Not a few people think the final document is already written, with perhaps just a few minor tweaks needing to be done. So the synod itself, all the discussions, the daily press conferences, even the final vote is nothing but a great big snow job. The final document, even before it's supposed to have been written, is quietly already tucked away in some cardinal's drawer, ready to be pulled out at just the right moment. That that thought could even exist, and then be openly discussed, much less be more or less believed, says a lot about the current state of affairs in the Vatican.

Rome is increasingly viewed as a collection of liars, homosexuals, thieves, deception artists, heretics and marxists. So, if that is the picture that this synod brings into focus — if that's what all this sunshine has revealed — then perhaps it wasn't a total waste of time after all. Clarity is always good. Understanding exactly what is going on is never a bad thing. Helping people to easily see and comprehend the mess — always helpful.

Whatever radical, theological-sounding, baptized dissent emerges from this, once all the dust has settled, the Amazon Synod may well be remembered not for creating a small space for married clergy, or dreaming up "integral ecological theology"— whatever that is — but for being the Sunshine Synod, where all the corruption finally was brought out into the brilliant light of day for all to see.

Pachamama can't possibly be pleased with that outcome. 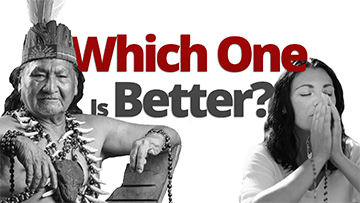 Which One Is Better?
It ain't the commies, and it ain't Pachamama.