The Truth Comes Out

The U.S. Catholic bishops' conference is finally, at last, being forced to come clean with the whole truth, the entire truth, regarding the actual number of victims of predatory priests.

And no shock here, pay attention, Cardinal Cupich, most of the victims were physically mature teenage boys at the time of the abuse. But as you like to maintain, it has nothing to do with homosexuality, you liar.

As loads of national media attention started being shined on this horrible reality of homopredator clergy, the bishops in various dioceses were kind of forced to start setting up victim compensation funds and essentially advertising for past victim to come forward.

They are running announcements on social media, have set up hotlines in various dioceses and have ordered inserts placed in parish bulletins, all in an effort to get to the victims, pay 'em off and shut 'em up before law enforcement finds out.

One by one, states are now opening up the statute of limitations laws, essentially expanding a victim's window to file suit.

Understand, this is a dastardly lot and this whole "victims' compensation" program is a flim-flam operation designed to buy off the victims in exchange for their silence and agreement to drop any and all further legal action.

A side question here: Exactly what dollar value do the bishops place on a soul, a victim's psyche, the pain of the family?

Is the money payout calculated along the lines of the actual nitty-gritty of the sex act performed or the number of times or the actual damage done to the generally young man based on his current age?

You know, when the bishop sits down with his lawyers, do they have an algorithm that takes all that into account or is it just some flat fee paid out?

Is there a human being out there, especially a faithful Catholic, who cannot see the monstrous evil that this is.

These destroyers of bodies and souls should be in prison for the rest of their lives, not drawing up legal buy-off contracts and using the money of the faithful to buy the victims future silence.

Last week, the U.S. bishops announced that there had been a huge spike in the number of victims coming forward since the summer of 2017, just at the exact same time, as stated earlier that states started talking about the whole statute of limitations issue.

Here is what the bishops themselves were forced to reveal, so as to appear transparent: The number of new victims increased by almost 700, more than doubling the previous year and the associated costs and payouts totaled 300 million in that single year alone.

And then in an extremely rare display of honesty, the bishops report actually admitted that most of the claims and payouts were owing largely to the victims' funds set up in five dioceses in the state of New York.

But remember, these numbers are from the summer of 2017–2018. They do not include all the madness that has occurred since last summer, when dozens of compensations funds were being set up by bishops all over the country in an effort to get ahead of the statute of limitations revisions by multiple states.

In short, as long as the bishops could get away with neither recognizing nor compensating victims, they were good with it.

But as soon as the kitchen got too hot to stay in, and chatter revved up of everything getting exposed in open court, they tripped all over each other getting on the phone with their lawyers and setting up the victims' funds.

Then, deceptively, they told the victims to get in touch with them and enter into a quiet payment by signing an agreement that they would not pursue any further action against the Church, thus limiting their liability as much as they could. Pretty clever these guys when it comes to the money.

First, what these numbers, and remember, they are the bishops own numbers, what they show is that there are thousands and thousands of more victims then the bishops have spoken in terms of.

When all of the other dioceses who started the victim's funds after 2018 report their numbers, this will look like an avalanche, because that's exactly what it is.

Imagine how many many more victims will be revealed by multiple dioceses in light of last year's "Summer of Shame" and all the pursuant horrible publicity.

But here is a second consideration, most disturbing of all. Many of these bishops today, men who today wear the miters right now, knew all about this filth and deviancy from years ago when they were on track the career track to become bishops.

They went along with this horror. They looked the other way. They helped orchestrate the cover-up. They bullied victims, cajoled them into silence, threatened them, intimidated them, pulled spiritual rank on them so to speak.

They caused many to kill themselves. Others to spiral into nightmarish lives of isolation and darkness. Many of these victims abandoned the Faith.

And they knew about them.

They knew all about them. They knew they were existing, barely, out there in the shadows, on the margins leading desperate lives, drug-addicted lives, lives of sexual perversion, of it in response to the sufferings of being raped and assaulted by homopredator clergy they covered up for.

Nowhere did these men, once promoted to office of bishop, nowhere did they reach out to these victims — their victims.

There were no compensation funds set up; no programs instituted to help them reclaim something of their lives. These bishops showed not the slightest bit of remorse for their sufferings.

It was only when media coverage and political action started to catch up to them did they spring into action. This demonstrates a depth of callousness that can only be described as demonic.

One day, at their death, just as abortionists will have to see the faces of their hundreds of millions of victims pass before them, these "shepherds of the flock" at their individual judgments will behold the faces of all the thousands and thousands of their victims — lives destroyed, souls entrusted to them to help gain eternal life, all squandered and tossed aside.

It is only fitting that despite their hypocritical claims of caring for the victims being their motivation, we all know it's only about the money, that they should spend their final years in office in dozens of legal meetings and depositions and concocting plans to raise funds to pay for all this — and figuring out which building to sell off and what parishes to close.

They cared about nothing but career, money and sexual cover-up during their younger years. Now they can spend the end of their careers in the bed they have made.

And then, it's on to final judgment. Dear God, pray at least some of them come to their senses and publicly recant this evil and make a full confession. 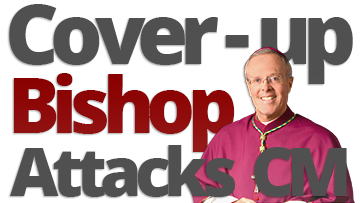 Cover-Up Bishop Attacks CM
Because smearing faithful Catholics is all they have left.