The Truth of the Church

We must shout it from the rooftops.

As we prepare to move into the holiest days of the year, we need to approach the commemoration of Our Blessed Lord's passion, death and resurrection with a spirit of authentic evangelization — meaning we must tell people the truth of the Church.

The Catholic Church and She alone is the continuation of Christ here on earth; not just His words, or teachings, like Lutheranism is for Martin Luther or John Calvin is for Calvinism — or, for that fact, like Buddha is for Buddhism.

None of those man-made religious systems has any ongoing intimacy with their founders. Their founders are dead and their philosophies are malleable, as history has proven.

The founder of those no longer has any direct, personal contact with them. That died when they died.

But not so the Catholic Church. Her founder, Jesus Christ, endured death, but rose from that death and is fully alive and present in the Church, just as the Church is present in Christ.

The most recent evils of men in the Church do not in any way subtract from the truth of the Church, that She is the bride of Christ.

Evil and wicked men have always been with the Church just as Judas was, a fitting thing to remember on this Spy Wednesday when he plotted with the leading Jews of the time to hand Our Lord over to them.

We need to always be vigilant about traitors and enemies of Christ within the Church. But stepping into the Church's most sacred time, we need to also recall the glory of the Church, something which can likewise never be far from our minds.

The Church is Christ extended through time and space because He wanted it to be so. Men did not enthrall the Church with sanctity and its mission — the Son of God did.

And those who move from the Church Militant here on earth into the Church Triumphant do so specifically because they conformed themselves to sanctity and mission of the Church.

They seized on it, clung to it, embraced it, made it their own. They became new men, as St. Paul instructed. A true Catholic sees himself in no other capacity. Everything is ordered to his Catholicity. Part of that Catholicity entails a desire that the whole world be brought to the truth of the Faith — the only true Church on earth.

It was on Calvary that Our Blessed Lord brought forth from His side His Bride, just as from the side of Adam, Eve was brought forth.

The blood and water which poured from Him after Longinus pulled his lance from the body of Christ is the lifeblood of the Church, for whom He died.

While it is, of course, true that Our Lord died to redeem all mankind — desiring the salvation of every person — it is also true that not every man cooperates with that aspect of the divine will. Only those who die in a state of grace are admitted to the Beatific Vision.

Our Lord brought forth from His side the Church to be the instrument of grace most readily obtained. To die in the embrace and bosom of Holy Mother Church is a guarantee of eternal life with Christ. This is the very reason for the Church. It is the truth of the Church.

To say anything less, to downplay this divine reality, is perpetrating a spiritual fraud. It is to undermine the divine mission of salvation.

No, all religions are not the same. The Catholic Church and She alone is necessary for salvation. All others are false.

While it is true that God can use other religions to bring about a greater awareness of Himself, He Himself desires that all men be joined to Him in His Church, to which He gave the power to call Him down from Heaven to forgive sins and restore men to Himself.

My father — God rest His soul — was born into a Protestant family, even studied for a couple of years to be a minister.

He said to me one day: "I pray for my mother every day because it was she who first introduced me to Our Lord through the Bible." Amen — I likewise pray for grandmother every day. I never met her in this life.

How her salvation might have been brought about, I have no idea. That is commended to the mercy of God.

But my father understood, once he started seeking and asking, mostly my Irish mother — God rest her soul as well — that where he was in Protestantism was insufficient for him for Heaven. He could not remain where he stood and retain a hope of seeing Our Blessed Lord in the face.

He was given the grace freely by Our Lord, but then he cooperated with that grace.

That truth changes men's lives. It brings them into the fullness of life in Christ — the same Christ who during His ascension commanded His followers to baptize all nations.

Our duty is to preach, teach, witness and declare the truth of the Church. Some will receive it; others will not.

The disposition of the souls who will not is a matter for God. But He made Himself very clear on the necessity of belief in Him.

Judas did not believe. He may have at one time, to some degree. But there came the moment in Capernaum when Our Lord demanded the highest order of belief, and Judas began his betrayal in his heart.

A year later on this Spy Wednesday, he would formalize his betrayal with the Jewish leaders.

He rejected the Church present as it was in Christ Jesus. And for this reason, dying outside the Church, it would have been better for him had he never been born. 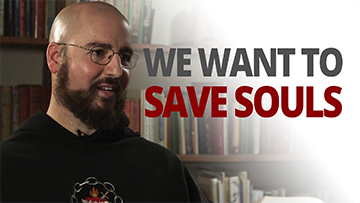 We Want to Save Souls
And that's it.