Because justice demands victims have one.

There is no doubt about it that this apostolate — your apostolate — has become the voice for victims in the Church and the society damaged by the heresy of modernism. The bishops continue to manifest cowardice or a shocking level of tone-deafness and, in some cases, even wickedness — all of it leaving a flood of bodies and souls in their wake.

As we've said many times before, Church Militant did not begin this way, and we didn't even envision it would ever reach this point. But we have, and we intend to (and will continue to) seize this moment in the Church's sacred history because it must be met. There have been too many victims; too many lies; too much evil; too much distortion, deceit and confusion.

In the past months (really since the pandemic used by evil men to control societies for wicked ends began), Church Militant has exploded. And the good news is there doesn't appear to be any slowdown. Each night, more and more viewers discover Church Militant Evening News, a one-stop resource for all your news and information on everything of concern to faithful Catholics. Even many Protestants tune in each night at 6:30 p.m. ET or catch it on replay on the site. Frankly, there is nothing like it in the entire Catholic world.

There have been too many victims, too many lies.

The Vortex, of course, continues to set the tone of discussion in many ways in the Catholic world, with each episode garnering at least tens of thousands of viewers each day. At this point, tens of millions have viewed multiple episodes of the more than 3,500 we've released.

Of course, there are the Spotlight investigations we produce, hosted by Christine Niles, exploring a wide range of topics from sexual abuse cover-up in the Church and breakaway groups like the SSPX, to probable murder of priests to shut them up about corruption and so forth.

But it's not just programming that Church Militant provides in our quest to provide a voice to victims; we also produce events that draw millions of eyes. For example, in our recent Persecuted Priest Summit, we brainstormed and worked really hard to bring nine persecuted priests to our studios so you could hear how wicked some of these bishops are in their behind-the-scenes dealings with faithful priests. Father Perrone perhaps said it best regarding Church Militant when he basically said, if it weren't for Church Militant, there would be no voice.

Again, we didn't start out to do this because, like many Catholics, the bishops had us snowed as well. We had no idea about the cowardice and evil that existed quite comfortably in their ranks. But once we found out, we shifted gears and began to expose all of the moral, financial, liturgical and doctrinal corruption.

Their actions and lack of actions kill souls, and every baptized Catholic has a sacred duty to fight for souls. Bishop Sheen said, "The surest way to Heaven is to take another's hand and lead them there." To whatever degree Church Militant can be involved, we are not going to let the ship go down on our watch — good people deserve protecting and defending.

To that end, we recently began our New Catacombs project, designed to keep priests' and deacons' identities completely anonymous (even from each other) and provide a voice for them to speak up against the "malforming" of Catholic laity by the bishops.

We published their very first statement last week, fittingly enough for the hundreds of priests involved, to defend the Eucharist. Viewers were ecstatic to hear and read it. God bless those hundreds of clergy. There will be much more from them, and more clergy members are signing up.

And of course, we would be remiss not to talk about the Church Militant Resistance, where thousands and thousands of Catholics from virtually every diocese across America are signed up as members and are actively engaged in supplying us intelligence, organizing prayer rallies, contacting bishops in person — all of it to demand a return to authentic Catholicism, whether it be the manner of reception of Holy Communion, fighting back against heresy in a given diocese or just informing other Catholics.

As they say, once you've heard something, you can't "unhear" it. You may not like what you hear, but truth is truth. The ranks of the Resistance continue to swell.

The increasing number of interviews with notables in the Church and the political world — all pushing back against the modernism in the Church and Marxism in the culture — has catapulted this apostolate into the position of being the bad bishops' worst nightmare.

Unlike any other Catholic source, for years Church Militant has been broadcasting information about the intrinsic link between the Church and politics or, perhaps put better, modernism and Marxism. Years ago, we detected the relationship between these two evils, one a heresy to destroy souls, the other a system to destroy bodies — both from Hell to attack the creature made in the image and likeness of God.

Too many bishops support or remain silent in the face of either or both of these. Everything these types of bishops do — sex abuse, its cover-up, silencing orthodox priests, ignoring the faithful and a host of other things — all feed into one or both of these two evils. They used to be able to do whatever they want, totally unaccountable, and they advanced these monstrous evils through their sins of commission or omission.

Now, they have to be looking over their shoulders, fending off increasing scrutiny from faithful Catholics growing increasingly furious over the abuse of their offices. Look no further than the ridiculous so-called Eucharistic coherence discussion. If that doesn't demonstrate the weakness of the bishops, nothing else does. What on earth are they debating? All they have to do is republish practically anything from virtually any of the gospels or the Fathers or the Doctors of the Church or the saints and then enforce canon 915.

They've made a laughingstock of the Church, which is why notorious child-killers like Biden and Nancy feel totally free to simply sidestep the issue when asked about it in a press conference. It's why Jen Psaki, Biden's White House press secretary, feels she doesn't have to acknowledge that a 15-week old baby in the womb is actually human.

All of them keep falling back on the line of defense that it's a private matter. They get to say that because for almost 50 years — and 65 million corpses later — the bishops have allowed it. And, as Church Militant reported last week, they still intend to do nothing about this sacrilege. "There will be no national policy," the bishops stated.

So, the heat needs to be turned up further. This arrogant crowd believes itself to be above the Code of Canon Law, above Scripture and above the Church.

This is the driving reason that Church Militant unveiled the latest weapon in our technological arsenal: live capability to feed into our Evening News. We displayed it for the first time last week as we reported live, in real-time, from the Fr. Parker event in Lombard, Illinois, where Bp. David Malloy is persecuting him.

After dropping a sizable amount of cash for the state-of-the-art technology, we now have the ability to "pop up live" in any diocese in the country to give an up-to-the-minute, real-time report, with interviews and details of the malfeasance going on in any bishop's diocese.

The beautiful chapel here at the studio, dedicated to the honor of the Prince of the Heavenly Host, St. Michael, is the most important room in this entire apostolate. The entire staff spends roughly one hour in here each day in prayer. Everything we do, the required strength, energy, insights — all of it — originates from this chapel. It was in this chapel that the saintly Fr. Pablo Straub, God rest his soul, repeated to me the charge, "Michael, you must bring Christ to the internet."

While we are, of course, proud (in a good sense) of what we do, we take to heart most seriously what we pray from the Psalms in the chapel: "For it is you who have accomplished all we have done." Every day we pray to be used to help save souls. Nothing else matters if that is not the center — and it is.

Every day we pray to be used to help save souls. Nothing else matters if that is not the center — and it is.

So we'd like to take a moment now and ask if you would help us keep fighting by contributing a monthly donation of $25 (or more for those who are able). Every single point we just went over as far as our programming and services and events we provide comes to you for free. But they are not free to us to produce. In fact, it's a small fortune each month because of the costs associated with this industry. Constant technological upgrades, maintenance, the salaries to pay the growing staff we need to keep pumping out these kinds of productions and events costs money.

So if you are able to afford $25 or more a month, please click here to donate whatever you can.

Church Militant serves faithful Catholics who have been deprived of the fullness of the truth by wicked or cowardly actors in the hierarchy — the same actors who are enabled by an entire network of parasites in the Catholic media, educational establishment, chanceries and various seminaries (all of whom stay silent yet continue to draw paychecks, directly or indirectly, getting rich off the diseased body and adding to the victim count).

Please help us continue to fight against all this evil and to keep providing a voice for victims. Thank you in advance for your generosity and sacrifice. 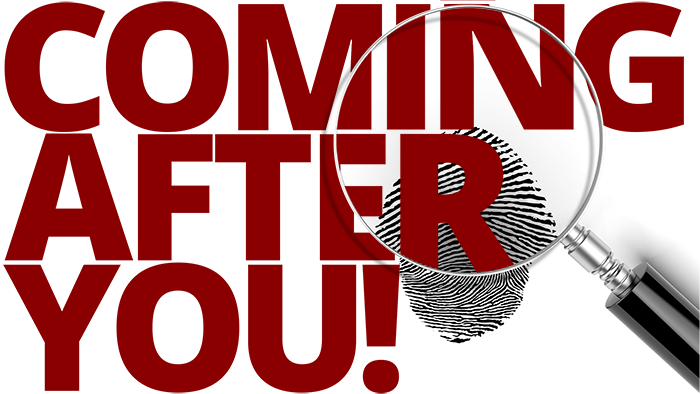 Coming After You!
And we will expose you.