They keep the crooks in place.

Before we begin, I'd like to ask that you say a prayer for my mother, Anne. Today is the 16th anniversary of her death. Church Militant ultimately exists because of her prayers for me to turn from a life of sin and return to the Faith. And as an aside for all moms (as well as dads), never, ever underestimate the power of your prayers and sacrifices for your children. Thank you for your prayers on my mom's behalf.

Now, pushing on. The so-called Catholic so-called media is a disgrace — as in dis-grace. Look, here's the reality: Either they are journalists, or they are not. If they aren't, then they need to stop lying to people by pretending they are. As it is, a number of them (like Crux and Catholic News Agency) are little else than warmed-over apologists for the bishops. They amount to nothing but stenographers, just writing down and publishing the party line of the U.S. bishops, with no serious critical thought or questioning.

In their minds and articles, the bishops should always be given the benefit of the doubt — as if the monstrous spiritual, financial and physical transgressions by the hierarchy for the past half-century simply had never happened. Each new news cycle and event seems to have no relationship to the past.

The bishops, as a whole, have severely abused their authority — either actively or passively — and at this point deserve absolutely zero benefit of any doubt. In fact, they have a great deal of explaining to do.

The bishops, as a whole, have severely abused their authority — either actively or passively — and at this point deserve absolutely zero benefit of any doubt.

But since they feel no such compunction, then the so-called media (who lapdog them around) have a moral duty to expose their filth, every last bit of it. And taking the "moral high road" is not done with noble intentions, but as a self-serving act of sanctimonious hypocrisy so that they can continue to curry favor with this wicked lot.

The latest act on their part revolves around the despicable archbishop of Washington, D.C. and his deliberate inflaming of racial tensions to score political points against the president. For example, John Allen (of Crux) had written an article strongly suggesting Gregory had not known about Trump's visit to the Pope Saint John Paul II National Shrine ahead of time. He even strongly suggested the local Knights of Columbus had deliberately concealed it from Gregory. Did he not think to contact the White House to see if they had informed Gregory? If not, why not?

That's what reporters do — check the angles, all the angles, not just the ones that steer the reader to arrive at a certain conclusion. Then there was the great kerfuffle that arose among various media types about Church Militant's breaking news article last Sunday, that Gregory was ordering his priests to show up at a protest rally. Many of the unthinking crowd happily accused us of blowing it up, pointing to the e-mail thread saying the word used was "invited," not "ordered."

We knew that. We posted the very e-mail in our article. What we reported were sources in the archdiocese of Washington, D.C., who, despite the politely worded e-mail, were told they were "expected" to be there, in cassock (and "expected" was not conveyed in a polite manner). We confirmed this and went with the story, because it was true. Sources close to the D.C. Knights of Columbus also told us that Gregory had made his anger about Trump being at the shrine felt to them and had roped them in on the deal as well, also in a threatening manner.

Next up, Catholic News Agency's immature article saying, in summary, that while Gregory should provide answers to questions about a White House communication directly stating that he did know days before, we can't assume his reasons for staying mum.

Isn't that convenient? While the article accused Church Militant (in a sideways manner, of course) of having political or partisan reasons for going after Gregory's duplicity, him they give a pass to, not even raising the possibility that the archbishop is a political hack trying to stoke the fires of racism and agitate against the president.

Listen, CNA, you with zero professional journalistic experience: To not raise that question, which is an immediate possibility (in fact, the most likely possibility), to fail to raise it is the opposite of journalism. It's providing cover for him, nothing more — carrying his water. Why should a man who has a solid reputation for being homosexual; who came from the Bernardin machine; who was hand-picked by Donald Wuerl, the consummate liar, to cover his tracks for him; who lied to the entire bishops' conference in 2004; who spearheaded the Dallas Charter response along with the very predator who was the greatest offender; why should this man be given any quarter?

He deserves nothing personally except contempt. But from a journalist's perspective, he deserves severe questioning, an exposé, further digging. Why does he get the kid-gloves treatment when actual journalists, doing the job you should be joining in, get your contempt? Why aren't you asking the questions that need to be asked and then developing sources to get the answers? Because you aren't journalists.

There are plenty of people — terrified priests — who are quite free with their info, but you seem to think they don't exist. All of them we talk to think you guys are hacks. Likewise, how about direct questions to Gregory about what he knows about the protracted delay in publication regarding the McCarrick Report? After all, Gregory sits in the very same exact office and desk that McCarrick used to occupy. You'll cover his stupid "Theology on Tap," happy-talk sessions, but not the story.

Why haven't you held his feet to the fire about allowing fellow homosexual priest Msgr. Rossi to remain in such a high-profile position at the national basilica? There are a slew of stories you can do on Gregory, and you whiff on every one of them.

Sources in the archdiocese of Washington, D.C., who, despite the politely worded e-mail, were told they were 'expected' to be there.

CNA published yet another "happy news" piece last week about the McCarrick report, quoting from an alleged anonymous victim of McCarrick saying he believed the Vatican was really trying to get to the bottom of what happened because Rome had questioned him. Okay. Fair enough. Perhaps he believes that. But is that really the news?

The news is that this has been going on for two years now and not a peep from the pope. Not a mention (or probably even a thought) by CNA that it may have been completely taken in and used.

For example, this week marks the two-year anniversary of the McCarrick crimes coming public; so it would behoove the Vatican to get out in front of what will certainly be a lot of media coverage asking, "Where is the report?" So it is certainly not outside the realm of possibility that CNA was simply used by crooks in the Vatican.

Remember, you're dealing with one of the most corrupt groups of men ever to don a cassock. But CNA and others refuse to approach stories from that perspective. They never even hint that something crooked may be going on, ever, with a bishop or the Vatican, unless the story is already known or about to become known.

Catholic readers and viewers should remember that, time and time again all over the country, the hierarchy has been caught red-handed in multiple scandals. They don't deserve a pass — of any kind. They have behaved collectively in a most despicable manner, committing crimes and moral outrages that stagger the mind.

And they have been able to do this and get away with it because of how much deference they have been undeservedly shown (and that largely through fawning coverage by their water boys).

In case these phony reporters hadn't noticed, the "Church of Nice" is quickly passing into irrelevance; and since they have hitched their wagons to that shipwreck, so will they.

Catholics and authentic journalists have one major thing in common: Each are lovers of truth. As we all know, and my mom always stressed to me, sometimes the truth is a tough thing to handle. But that never excuses a cover-up or being a complicit water boy, enabling the rot.

Ask the tough questions, or step aside. Better yet — just step aside. 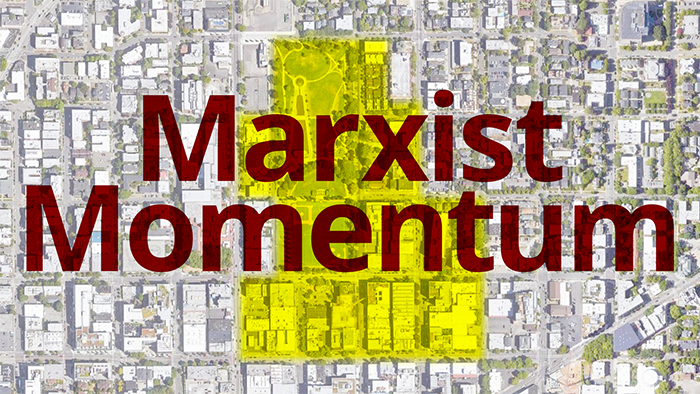 Marxist Momentum
And they're coming for you.