Utter destruction of the Church.

2018 will go down in Church history as the year that the #MeToo movement finally swamped the Church — and thank God for it. These wicked, conniving, hypocritical bishops and cardinals need to be exposed, completely and utterly exposed for their evil in all of this.

It's not enough that serial sexual abuser and harasser McCarrick had to be yanked from public site and hand in his resignation from the College of Cardinals. He needs to have his red hat ripped of his predatory head and be dismissed from the clerical state. But he is just the first senior member of the hierarchy this needs to happen to.

As usual, a major sexual scandal develops and the bishops close ranks, issuing legal sounding statements and waiting for the storm to pass. It ain't going to pass this time.

For years now, Church Militant and many other faithful Catholics have been warning anyone who would listen that the ranks of not just the priesthood, but the hierarchy is corroded with the foul stench of sodomy. All we and others got was nothing but criticism and accusations of being divisive — from our own archdiocese for starters — crawling with this sodomy approving careerist lot, and then other prelates around the country saying we are mean and confrontational.

Well how about it now bishops and bishop lackeys? We were wrong, you nest and brood of vipers? Protecting each other left and right, knowing good and well that what we and others were saying was right. You rotten hypocrites, you spent decades covering for not just McCarrick but dozens and dozens of other men just like him, all pretending you either didn't know or should not say anything.

Yet, you all kissed up to McCarrick, even when he lied to your faces at the 2004 bishops meeting where he said then-Cardinal Ratzinger ruled that pro-abortion politicians could receive Holy Communion. Ratzinger had said exactly the opposite.

So many of you knew he was raping, molesting and coming on to seminarians in the diabolical beach house on the jersey shore, it's sickening. And you all let him step forward and be the face of your hypocritical "save the children" Dallas Charter in 2002 while rumors and certain knowledge of the fact that he was a predator right in your own midst.

And how convenient at that meeting you all voted to exempt yourselves from any scrutiny — guess we know why now, huh? Why didn't you vote that you, yourselves had to sit through the so-called Safe Environment training that you mandate everyone else in the Church who is even in the same room with a child has to undergo. You've made that training mandatory for even lay people — the gall. Hey, note to bishops: It wasn't lay people raping altar boys and seminarians, it was you and your army of homosexual perverts you've knowingly ordained for decades because many of you are homosexual yourselves.

Why did you all worship at the altar of McCarrick? We know that at least two of you had first hand knowledge of him sexually attacking seminarians because you signed off on the settlements and signed the checks. That would be Abp. John Myers of Newark and Bp. Paul Bootkoski of Metuchen. Did you go to Rome and say this man must be stopped?

At that time, McCarrick was in the final years of being Cardinal Archbishop of Washington, D.C. How dare you not issue a press release and inform the faithful, to Hell with your secret settlement agreements. The laity has had enough of all your secrets and lack of transparency.

You two need to explain your silence, and your brother bishops need to demand in public that you explain what happened and why you kept your mouths shut. Even in retirement, McCarrick was allowed to walk around donned as prince of the Church presiding over various ceremonies for years — filthy and it's disgusting.

Do these bishops, and the other bishops you know they told, not think any of this is a big deal. It would appear to be that way, according to a tweet from Providence, Rhode Island Bp. Thomas Tobin, where he downplayed the evil and gave his brother bishops a little pat on the back for basically a good job in running the Church. The outrage that ensued after that tweet forced him to not just remove the tweet itself, but his whole Twitter account.

But it is indicative of this clerical episcopal mindset, this groupthink, that allows active homosexuals to run wild under their miters and then excuse them. Yet when the laity try to call them on this, the hammer of Thor drops on them.

Remember last July when the phony Church of Nice Catholic Leaders Conference was assembled in Orlando, Florida when hand-picked delusional sycophants of the bishops went to Florida and talk about how great things were in the Church?

Those same bishops and leaders who have known and continue to know about the enormous number of sodomite priests and bishops in their seminaries and chanceries couldn't wait to stick up a wanted poster of some of us here at Church Militant to make sure we were run off the property — you rotten hypocrites.

We love the Church, but you don't. You don't love Her teachings, you don't love Her beauty, you are in robes for nothing other than your own personal cover and gain. You have laid waste to the Faith for decades with your homosexual rapists and cover-ups. You have robbed the laity of billions of dollars, not to mentions hundreds of millions of souls.

When one of your cohorts, Chicago Cardinal Cupich, stands in front of a crowd and openly and publicly declares that you have brought revolution to the Church, he's right, and he should be defrocked for the filth flowing from his mouth. As many of you should be as well, for allowing and advancing this homoheresy to strangle the life out of Holy Mother Church.

Where is your joint statement condemning the heresies and dissent of Fr. James Martin, or are you rightly terrified that your own homosexual pasts — and maybe presents — would become public?

None of you fear Hell, which is one reason you are happy as Hell to have Bp. Barron promoting his idiocy that we have a reasonable hope all men are saved — you better hope like Hell he's right.

You have brought the Church to ruins, squandering the patrimony and memory of the past, continuing in your filthy debasing sins in the present and setting a course for near extinction for the future. And amidst all of it, what do we hear? Cardinal Sean O'Malley saying we need new policies. Yep, the official response from the U.S. cardinal made point man on all this by his fellow conspiracy-minded brother bishops? He says this has been a failure of policy.

We don't need new policies, we need new bishops, a virtual clean sweep. How the entire lot of you isn't terrified of meeting God in a few years is something the struggling little layman just can't get his head around.

You have no moral voice left, mostly because you have used your voices amongst yourselves to hide and conceal each other's sins. You have attacked the laity physically, emotionally and spiritually, and if you don't come clean — now — you will be rotting in Hell and its torments forever, and you will deserve it, burning in unquenchable fire with the ontological marks of Christ as savior creating an additional inferno in your souls.

What in Hades is wrong with you? Why do you not recognize the signs of the times, the times you have created in the Church. Almighty God has allowed all of this to come into the open as one last demonstration of His Mercy to you — so you will repent.

And by the way, we mean real mercy, not the fake garbage mercy you lot are pedaling because it provides cover for you to carry on with your pederasty, sodomy, secret payouts and criminal sinful cover-ups. How dare you stand in front of the laity and preach to us and threaten us with canonical sanctions about illegal immigration and climate change and gun control when you have been participants in these mortal sins.

No one goes to Hell because he supports the Second Amendment. But you surely will for the horror and demonic terror you have unleashed on the Church, unless you repent publicly and confess your sins — publicly.

You are liars and deceivers of the worst sort because you use the things of God to cover your work with the devil. And that is what it is — nothing less. Thanks to you, there are only a small number of Catholics left who actually know and believe the Faith. You and your sodomite "brothers" have seen to that quite nicely.

Well, know this, none of the remaining faithful pay any attention to you anymore — you have been exposed. The whole shootin' match of what you have been about behind the scenes, in seminary bedrooms and beach houses and neatly tucked away apartments and diocesan bank accounts, is all being dragged into the light.

The only thing faithful Catholics will listen to you over is a sincere expression of your regret while you plead for forgiveness as you are announcing your resignation. Forget about the next round of money-raising campaigns and your protestantized ALPHA garbage implementation, you have betrayed the faithful — but most importantly Christ.

Resign and go spend the rest of your lives in penance — after being defrocked — before you have to face the real judgment. 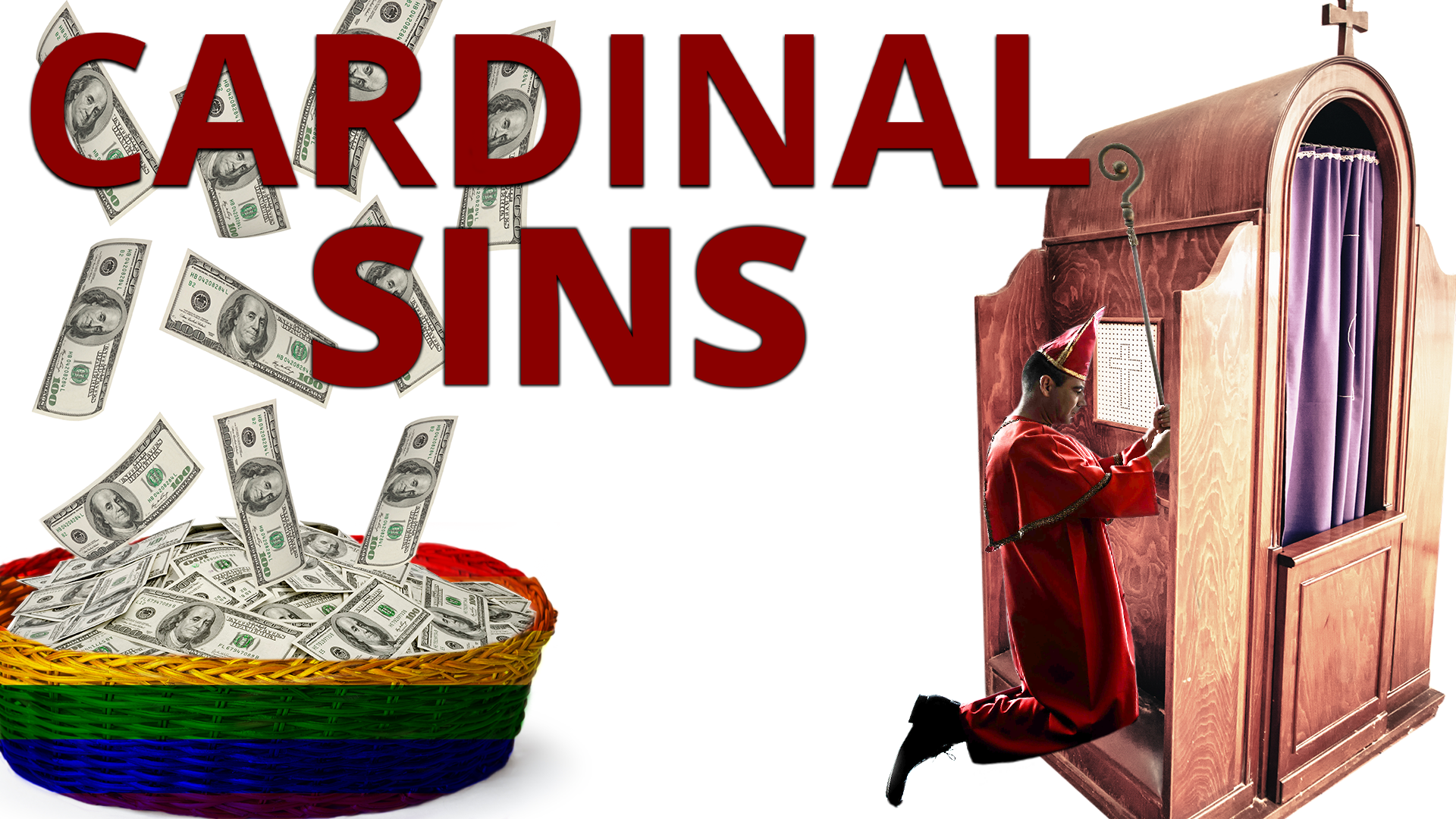 Cardinal Sins
And there are many.