‘They’ Are Not the Church

And in Hell, they will be forever cut off from Her.

As the assortment of evils within the Church keeps getting exposed, one thing needs to be remembered and understood — these people propagating the evils are not the Church. They are just members of the Church, and that applies especially to members who are bishops.

Even if 90% of the hierarchy is corrupt (and that might be on the low side), it matters not in the slightest. Their evils can never touch the heart of the Church. The Church is the Bride of Christ. Her teachings are divine and safeguarded by the Holy Spirit. No matter how corrupt, rotten to the core, wicked or evil some of these men may be, nothing of their individual evil stains Christ's Bride.

They align themselves with the world and treat the Church as a strictly worldly institution, instead of the supernatural entity She is, merely operating in the world. It is a horror to behold because it disfigures the Bride of Christ in the eyes of those who look at Her. They are marring Her beauty, covering Her glory and, thus, are making the apprehension of Her truth, beauty and goodness difficult for men to see, much less be attracted to.

When the angels in the night sky over Bethlehem declared "peace on earth to men of goodwill," they spoke of those who would be attracted to truth because they possess goodwill, i.e., a will that is desirous of truth. The Catholic Church is the fullness of truth because Her divine Founder is Truth Himself.

If Our Lord Himself was betrayed by a bishop, can we be surprised when it happens to us?

Yet these constant entanglements with worldly goals by wicked leaders make it difficult to perceive the truth (meaning divine truth). People attracted to the Church are those who long for truth, like my father, for example, who converted after being an ardent Protestant. He was a man of goodwill who, regardless of his early religious training as a Nazarene, understood that he must go wherever the truth led, and that was the Catholic Church.

He died in Her embrace more than a half-century later and has moved from the Church in Her militancy to the Church in Her triumph, or at the very least Her purgation. But salvation did not come to him through the ramblings of wicked men in the hierarchy — although it still came through the offices they occupy.

Even though Judas betrayed the Truth, he still raised people from the dead as St. Alphonsus reminds us. We should be eternally grateful to Almighty God that the efficacy of the sacraments never depends on the holiness of the ministers. The transmission of grace is not blunted by their evil.

The Eucharist is still confected, whether by a scoundrel or a saint. And blessed be God. But for the searching, the lost or the wounded in need of holiness, these men do indeed prove a stumbling block. They present such a revolting image of the Church that some, attracted to the teachings, are turned off by the teachers.

This has great implications in this life as well as the next. The type of man attracted to authentic Catholicism is one who would normally also see the truth in other areas of life as well. He already possesses natural virtue, so he understands and corresponds to the natural law, even if haltingly. That in itself is insufficient for salvation, but it is a preparation.

He understands, for example, that marriage is between one man and one woman, that children have a natural right to a father and a mother, that biology has only two sexes. But what is such a man to think when he has some passing familiarity with the Catholic faith, and then encounters the lunatic ramblings of a Cdl. Blase Cupich or Bp. Robert McElroy insisting that "climate change" is more important than slaughtering hundreds of millions of babies through abortion, or that gay couples living in disorder should be treated as equal to a married couple.

The Eucharist is still confected, whether by a scoundrel or a saint.

So do not speak of the evils in the Church. The Church, strictly speaking, can never have evil within Her. But Her members — Her leaders — not only can but do. Archbishop Sheen used to say to be aware of the difference between a bad man and an evil man.

A bad man sins. An evil man tries to get others to sin, to be complicit in his sin, to bring another to ruin — as he has done for himself. Another Sheen observation to bear in mind: He said that Our Blessed Lord permitted the road to his Passion to begin with betrayal by an Apostle, a bishop, so that when His future followers beheld the treachery of the ordained and consecrated, they could refer to Judas.

If Our Lord Himself was betrayed by a bishop, can we be surprised when it happens to us? It was treacherous religious leaders that Our Lord railed against more than anything else because of the great authority they had. But never forget that even the Incarnate Eternal Logos could not convert them.

Disfiguring the Bride of Christ is not merely sinful or bad; it is evil. But it cannot be surprising, however regretful and saddening. It means we must pick up the slack. 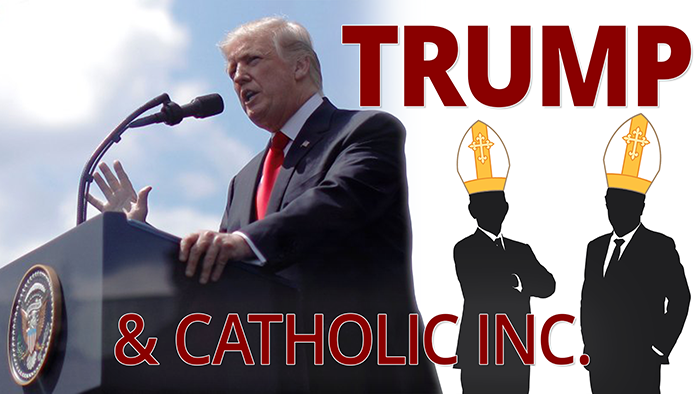 Trump & Catholic Inc.
It's come down to this.