Because they found your weakness.

When Our Blessed Lord said, "If the Son sets you free, you will be free indeed," He was speaking about the freedom that comes with being a child of God. But he meant not just a child of God — rather, an actual heir to the Father's kingdom.

In the striving for this, we must be totally detached — or at least be growing toward a detachment — from all concerns of the world, specifically one of the biggest there is when trying to evangelize. And that is human respect — caring what others think about you, specifically other humans.

Anyone who tries to teach others — educate them, inform them, enlighten them — about the truths of Heaven is going to be attacked, belittled, even killed. But before we get to the level of martyrs, there are first the tiny little martyrdoms we must encounter — mockery, for example.

Enduring ridicule and mockery is something that goes completely against our nature of wanting to be held in high esteem, thought highly of, be respected and all that. No one wants to lose the respect of men, at least in general. We all want to be liked. It's in our nature, remembering, of course, that our nature is fallen.

This is one of the surest ways Satan has of "getting at us." We each have within us this broken framework of wanting others to like us — so much so, that we will sacrifice much of ourselves in the process of gaining that praise.

Before a person can face the guillotine, or the den of lions, or the brutality of a Marxist camp and death platoons, he must first conquer himself sufficiently.

Going against the grain of human respect makes a person stand out, and essentially isolates them. Isolation and rejection are anathema to our human desire for community and friends and relationship.

In fact, community and friends and relationship is precisely that for which we were created. That is a pretty good definition of Heaven, in fact — being in full and final relationship with the Holy Trinity.

And of course, Hell is the exact opposite — complete, everlasting isolation from what we were created for, and mockery and ridicule and torture by demons, which never ends. No one cares about the damned, not even the other damned — they have no friends, no relationship, no respect, no love — the very things they were created for, which by their choices they have sacrificed forever.

So what we are faced with as fallen humans is a good that God has placed in us so we can find Him, but in our fallen state, a good which Satan can weaponize against us, and does quite successfully. No one likes to be not liked— no one. It is, in fact, one of the most powerful instincts we have. Lives are completely ruined every day because people sacrificed truth for human respect — for wanting people to like them.

Because of this basic instinct that Satan uses against us, many people will not say what needs to be said. It's not that they so much out-and-out deny the truth and reject it. It's just that they will not affirm it or acknowledge it because they are afraid of "what people will say or think."

But here's the hitch: The more a man is concerned about what others think of him, the more others control him. So much for freedom, right? He surrenders his manhood, his total self, all that he is. He simply tosses it aside, his manhood — which he has for the sake of the other — to turn in on himself and remain not a man, but an adolescent, concerned more with himself, his own feelings, emotions, childish preoccupations.

Numerous holy men and women have said: "Only heroes make it to Heaven — only heroes."

Before a person can face the guillotine, or the den of lions, or the brutality of a Marxist death camp and all that, he must first conquer himself sufficiently: Announce the truth with no concern about what others say about you personally. You are, in fact, commanded to do this by your God.

If someone challenges what you are saying, then by all means, throw down with them, for that is an argument over truth. But if they go after you, meaning who is talking to them, dismiss it all completely out of hand. The judgment of others on you as a man, because of what you are saying, it's all completely meaningless and a trick of Satan to get you to close your mouth.

There is hardly a faithful Catholic out there who does not recognize that the great sin of the bishops for the past half-century is their deplorable lack of masculinity, of fatherhood, in refusing to stand up and announce the truth.

Do not let their monstrous evil become yours. 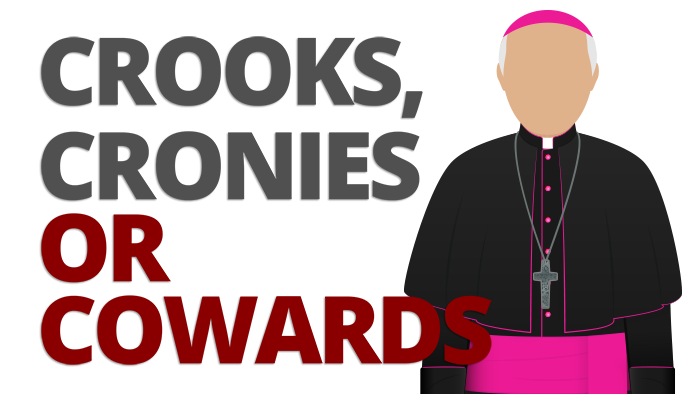 Crooks, Cronies or Cowards
You don't want any of them in your foxhole.