This rejection of the Faith MUST be corrected.

The vast majority of self-identified Catholics do not believe in the Real Presence of Our Blessed Lord in the Eucharist.

That unsurprising news comes from a recent Pew Research poll released near the end of last month.

The vast majority, nearly 7 of 10 Catholics, believe the bread and wine are only symbols of Jesus' Body and Blood.

Now, first off, those horrible numbers are of all self-described Catholics, meaning those who go to Mass each Sunday and Holy Days, as well as those who do not.

OK, but what about just those who go to Mass each week? Less than two-thirds of that group actually believe the Church's teaching, which means that more than one-third don't.

And while some might get all hepped up and excited that a majority believe, the dismal reality is — think about this — again, more than one out of every three people sitting in a typical parish Sunday Mass do not believe.

You have to stop for a moment and wrap your head around that.

Sifting through these numbers reveals the absolute carnage that is the normal case today owing to our modernist bishops. And it's a carnage most laypeople don't even recognize.

As usual, there are a thousand different ways to slice and dice through numbers, but in this case, each way points to the dismal reality of an epic failure on the part of bishops.

Before we get into the Pew numbers on this question, remember that only about 20% of Catholics in America actually goes to Mass each Sunday; the other 80% to do not.

So the very first reality to consider, which Pew does not, is this: When we say that two-thirds of weekly Massgoers believe in the Real Presence, we are talking about two-thirds of 20%, which, rounding up for ease, translates to approximately 15% of all Catholics.

Now interestingly, Pew digs down into the numbers to reveal that some non-Massgoers say they do believe in the Real Presence, but just don't go to Mass. That's a head-scratcher.

But when you add all the "believing" numbers together — those who go to Mass and those who do not — you arrive at the bottom line reality that less than one-third of Catholics in the United States accept this critical central teaching of the Church, which means 70%, 7 out of every 10 American Catholics, do not believe in the Real Presence of Our Blessed Lord in the Eucharist.

It's almost impossible to conjure up a more damning indictment of the hierarchy in the United States than that poll number.

The list of wicked men in miters — and yes, many of them are wicked — has reached critical proportions. They have simply thrown aside their chief duty, which is to teach.

Exploring deeper into the Pew numbers, look at this sorry stat: Almost half of U.S. Catholics don't actually know what the Church teaches about the Real Presence — 47% either do not know at all or actually think the Church teaches the bread and wine are just symbols.

How how can things have deteriorated to this abysmal level if not on purpose?

There is no way this is all from just a sorry job performance on the part of teachers. Compare this to any other job any teachers might do.

If half of all middle school students were to tell you that either 2+2=5, or they have never heard of 2+2 equaling anything, because they'd never been taught addition, you would rightfully conclude the teachers have been malicious, not just negligent — deliberately steering their students away from arithmetic truths.

The same goes here. Wicked shepherds have for 50-plus years tried to deemphasize the teaching of the Real Presence.

They introduced Holy Communion in the hand, for example, first brought in on a small scale by the devious Detroit Cdl. John Dearden and then spread across the country by the satanic homosexual predator Joseph Bernardin, Dearden's protégé.

Bernardin, while president of the Useless Conference of Catholic Bishops in the late 1970s, tried unsuccessfully three different times to get the conference to accept the practice.

When straight-up attempts failed, he rammed it through anyway with parliamentary tricks behind the scenes, with support from some of his fellow diabolical-minded prelates.

Reception of Holy Communion in the hand was one of the very first things the Protestant revolutionaries of the 16th century instituted to begin to lessen, and eventually end, belief in the Real Presence.

Something Catholics seem to forget 500 years after the Protty revolt is that the first generation of heretics and apostates were born and raised as Catholics.

Those people had to be untaught, had their Catholic belief in the Real Presence washed out of their minds, scrubbed from their daily worldview, and that was something that would have to be done gradually at first.

Insisting on reception in the hand, and then the later addition of drinking from the cup, were the first steps to degrading those Catholics' belief in the Real Presence.

It's also been marvelously successful in our day as well as 70% of U.S. Catholics do not believe.

Bishop Robert Barron earlier this week chimed in on this disaster posting on social media how "angry" — his word, "angry" — he was after reading the Pew Research study.

Really, Bishop? Your shock at these facts makes you angry? You and your ridiculous preaching that we have a reasonable hope all men are saved has been a contributor to this spiritual poison.

Why should anyone give a hoot about the Eucharist if they are encouraged by you to believe they go to Heaven regardless?

After all, you yourself are on record as saying that Christianity is the "preferred way" to salvation.

Now, in all charity, perhaps you are so completely out of touch or have cocooned yourself within a circle of admirers that you don't really understand how the common man on the street hears and interpret a comment like that coming out of the mouth of a Catholic bishop, but you should.

Of course, another reading of your words, because you refuse to clear up the confusion must be, that you don't have a real interest in actually declaring the hard truths of the Faith with stunning clarity because you will lose your popular following.

And yes, you probably would, just as Our Lord did in Capernaum when crowds of them got up and walked away and Judas secretly decided that he no longer believed.

In fact, how could any bishop be surprised by these results from Pew? Frankly, what is surprising, shocking in some ways, is that 3 out of every 10 still do believe in Our Lord's Real Presence.

But there is even a dark cloud with that silver lining, because of all the demographic groups polled, it was white, college-educated, middle-aged men and those over 60 who scored highest in terms of belief in the Real Presence, coming in at a little more than a third.

When it comes to the categories of the young as well as Hispanics, 3 out of every 4 of them reject the Church's teaching, 74% of those under 40, and 76% of Hispanics.

And what's disgraceful about those findings is this: These malevolent bishops have directed all their energies toward these two groups — "the youth" and Hispanics — for most of the past two decades.

So the question needs to be asked: What have you lot produced, what fruits have you brought forth? Bad fruit is the answer.

Older white men, a larger percentage of whom were in some ways out of reach of your corruption, this is the group that still believes more than any other.

But the people you have most associated with the "young" that you never stop going on about, and Hispanics, which now represent close to 40% of the entire U.S. Catholic population, these you have out and out betrayed.

Speaking as one, and on behalf of the demographic of white men approaching 60 and who went to college, it's up to us, still in the minority, to step forward and fight this evil from the bad bishops.

Church Militant is in the final stages of editing our first full-length documentary called The Holy Eucharist: God's Lamb.

We shot this documentary in Israel during Easter week, specifically with an eye to the near-complete loss of faith in the Real Presence among Catholics, owing to the corrupt practice of so many shepherds.

For more details or to place your order, just click on the provided link.

If the bishops will not teach, if they continually fall down on this, the source and summit of the Catholic faith, then the laity must step up, even if we are just a bunch of toxic masculine, college-educated, white, middle-aged men. 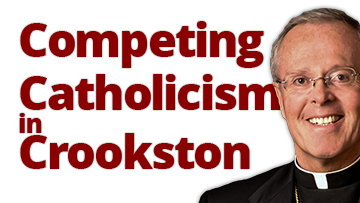 Competing Catholicism in Crookston
Divisive as well as childish.