They Never Admit Anything

And they have a lot to hide.

The onslaught of damning news surrounding Vatican corruption, sexual and financial, all has one thing in common: It's always exposed by outside interests.

These hierarchs never admit or confess a thing. Doesn't matter what it is; no scandal is too small or too big to try and cover up. These men lie and distort; they never admit anything until they are caught — and then it's always someone else's fault, or they were advised poorly, etc.

Poor, naïve prelates. No one understands them. Please!

Take, for example, the case of former cardinal, now Mr. Theodore McCarrick. Where exactly does the investigation on him stand right now? It was, after all, more than 13 months ago that Pope Francis himself said,"We we will follow the path of truth wherever it may lead" as we scour through "the entire documentation."

This does not look good at all, and frankly, it doesn't look good because it isn't good.

The entire McCarrick affair — filthy and sordid — involves dozens of high-ranking Churchmen who profited handsomely by keeping their mouths shut and allowed McCarrick to keep sexually assaulting dozens of seminarians — and as is coming out now, not just a few minor boys but a sizeable number.

But good luck getting any response from the Vatican on the state of the investigation.

Have they called any witnesses, investigated claims of gross sums of money passing through McCarrick's hands over the decades? Is there truth to the charges that McCarrick had access to a gigantic bank account in Turks-Caicos that was routinely deposited into by the Soviets, and that a Soviet agent is the one who quietly withdrew the money and spirited it to McCarrick, who used it to buy influence and "ignorance" in Rome?

If that charge is true, or even remotely true, then the implications are devastating for the Church.

It would mean, at the minimum, the Soviets had a plant in the Church who used their money for influence-peddling, while he insulated his own homopredation by payola. Exactly how is that for the man who self-admittedly never drew a paycheck after he became a bishop?

Church Militant has spoken to sources close to a federal investigation who tell us anonymously that McCarrick never had a personal bank account, checking account, credit card or any investment accounts in his name.

And yet he routinely flew first class all over the country, had envelopes stuffed with tens of thousands of dollars that he brought to Rome in a Vatican diplomatic pouch and paid enormous sums of cash to loads of people in Rome.

How is that possible? Where was the money from? How did he manage to escape detection for so long, as it turns out, after dozens and dozens of male victims have come forward accusing him of being a life-long serial homopredator?

This was an extensive, far-reaching endeavor of his. Between sexually assaulting and harassing scores of seminarians (where reports are that even other bishops were sometimes present at the notorious Jersey Shore beach house), and almost non-stop international traveling, you wonder how he had time for anything else — and most especially how not one, not a single one, of his peers will 'fess up to knowing anything about him.

Cardinal Kevin Farrell, appointed as camerlengo in the Church by Francis, shared a house in D.C. with the corrupt cardinal for seven years. And he was "shocked," he says, when the story came out.

Wicked Wuerl likewise simply couldn't believe his ears. He had never seen or heard anything about this before. He sat with the lying, plagiarizing Fr. Thomas Rosica at last summer's Knights of Columbus convention and together lamented the reports about McCarrick, calling him a good friend — and again, simply dismayed.

Last February at the Sex Summit in Rome, McCarrick's name never officially came up, not once. A handful of questions or references were asked or made by reporters but quickly deflected from by Blase Cupich.

Rome has no transparency, no accountability to anyone — anyone but God. But since a good number of these men don't really believe in God, or don't believe Jesus is divine, then they think they've gotten away with it.

They may have in this life. But this life isn't the only life there is.

In the meantime, where are all the other bishops, the ones here in the United States clamoring for transparency about the supposed McCarrick investigation?

They should be asking: What's the update? What has been found out? Have any other prelates been implicated? How far-reaching is the investigation? How is it being funded? Why is the Vatican press corps out to lunch on this story? Why is there no press update? In truth, is there really any investigation going on? For that matter, was one ever convened in the first place?

Every U.S. bishop and cardinal should be asking those questions. But no. Not a word. Not a peep. They know what's good for them, and have chosen to keep their mouths shut — which brings us to another more probing set of thoughts — and it involves those supposedly "good" bishops who trot around giving talks and saying how wrong and confusing some things are in the Church.

It's important to ask: What exactly are they doing to address this evil? Talk about it all you want, but what are you doing?

Do they have misplaced allegiance to each other or, even worse, some vague notion about "protecting the Church from scandal"? You've got to be kidding if either of those are their rationale.

Maybe they are buddies from their shared days at the North American College in Rome and therefore have been immersed in a clerical bubble for the past 40-plus years. It's easier to rationalize when others are prodding you along for their own self-interest.

Cowardly clergy are a curse on the Church, hiding behind clerical friendships and pretending their brother bishops deserve respect just because they are bishops, totally discounting their rotten actions.

They keep a safe distance from any laymen seriously engaged in the battle, laymen who have sacrificed practically everything, because the outspokenness of the laity is considered divisive or toxic or controversial.

Cowards. They value their ecclesiastical friendships over the sweat and toil of the laity fighting tooth and nail for the truth.

And yet their brother bishops are tainted with all sorts of controversy themselves — but that is excusable because, well, he's a bishop, and to associate with laity calling out the tainted bishops would be seen as an affront to their bishop bud.

So a question: How many of these men are immobilized by the dark secret they share with their brother bishop — that they are same-sex attracted, perhaps not ever acting on it, and yet sympathetic nonetheless?

Many of these men have risen to these lofty heights in the Church purely because they protected each other — and we're talking here about the supposed good bishops.

To think all this only pertains to the McCarrick situations in the Church would be way too naïve. If it were isolated only to those situations, and these other bishops were all about truth and transparency, then they would be bellowing for truthful disclosure. But they don't. Why not?

McCarrick was the most notorious case involving a bishop in centuries, and yet, one year on from last November's Silence Stops Now Rally in Baltimore at the bishops' annual meeting, that is exactly what the laity have received: Stone. Cold. Silence.

Where are the bishops' calls for openness, for accountability, for the victims, for the truth to come out?

But we all know what the reality here is. They protect each other. Period. Even the ones everyone believes are "good."

Some do that because they have had, are having or want to have sex with each other. Others simply know that their buddies are having sex, or have had sex, with other men, and then rationalize keeping quiet and shoring up their allegiances under the totally misguided notion that for all this to get out would do harm to the Church.

Hello? Have you looked around at what your silence has wrought? You supposedly good bishops and cardinals who have kept your mouths shut will have a lot to answer for when you stand before Our Lord. You chose the easy route. You encouraged a culture of silence wrapped up in "love for the Church." Baloney.

You love yourselves and your friends and will sacrifice anything and anyone to remain hidden and ensconced in your clerical bubble, living out some incorrect, misplaced notion that "scandal" about the institution must always be avoided — failing to realize that going along with all this filth, hiding behind that lame excuse, only sets the stage for far greater scandal, which is now unfolding.

You might have some bark, but you have no bite. How could you? You have no teeth. They were pulled with your spines when you were made bishop.

And yet you go along, seemingly oblivious to how you so weaken the Faith of those who know your complicity in choosing reputation over religion, all while basking in the glory of being a "good" bishop. 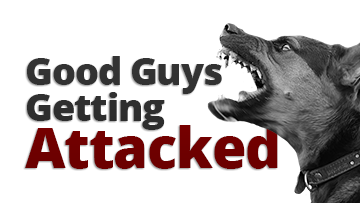 Good Guys Getting Attacked
And for good reason.